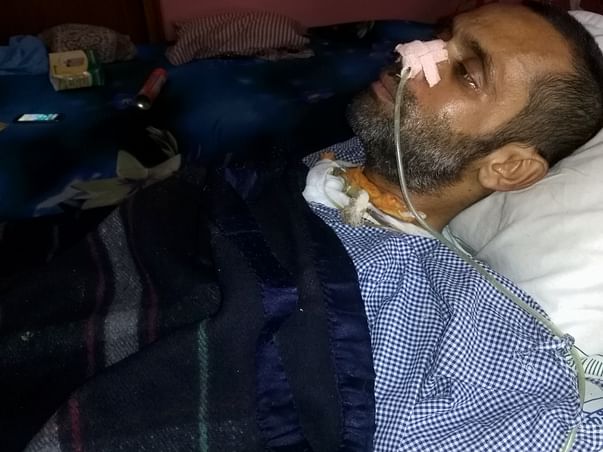 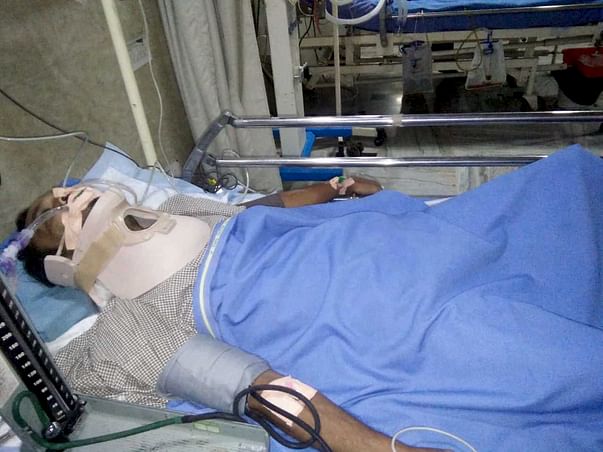 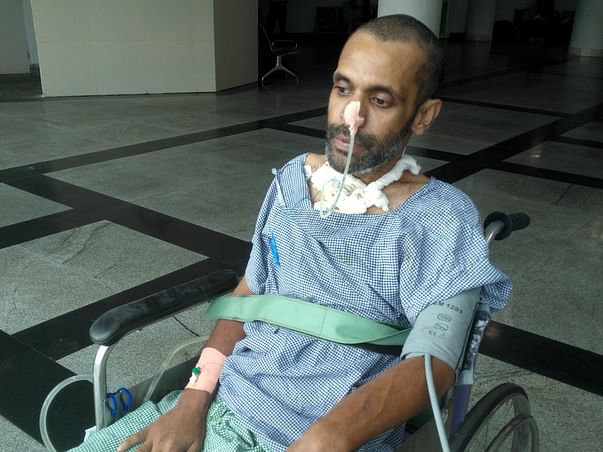 Previous Next
My name is Shilpa Banerjee and I live in Govind Nagar in Dehradun with my husband and son. We were living happily.  Me and my husband both work in private sector.  We have a son, he is 15 years old and we chose a school for admission, but it couldn’t happen. Now I am the only person to meet of the expenses of my family because my husband is not in condition to work.
It happened on the night of 24th July, we finished our dinner and gone to sleep, at midnight my husband gone to washroom, where he slipped and his neck hit the toilet seat and he became unconscious for some time. After some time he called us and me and my son pulled him up and tried to make him sleep by giving him a painkiller but he was unable to sleep as he was breathing heavily and both his legs and arms were not moving properly. When all this gone beyond control he said “save me”,”I am not able to breathe”, we immediately called the ambulance and took him to Doon hospital. They don’t have the facility of MRI, CT-Scan, X-RAY etc. hence they referred us to Mehent Indiresh hospital.
At Indiresh hospital they performed MRI, CT-Scan and X-ray and they gave painkiller doses, in the morning doctor came and diagnosed a fracture in c4 spine due to which surgery is a must, we asked about the expenses which they estimated 4-5 lakhs and there was no assurity of recovery. Till now the expenses had been reached 20000-25000Rs approximately. We lacked that much amount for surgery hence we brought him back to home, then someone suggested for AIIMS Rishikesh for better and reasonable treatment. Then we took him to AIIMS Rishikesh where the doctors again suggested for surgery .  AIIMS’ doctors said that after surgery my husband might need ventilator  support but they had shortage of it and they don’t have ICU that’s why they  referred to PGI Chandigarh. We had been exhausted till now and reaching nowhere. We were helpless  as there was no one to guide us and whatever amount I had with me going waste
We took him to PGI Chandigarh where they started initial treatment but after 2 days doctors  discharged him, said take him back and start home care and put a cervical collar on his neck. Till now expenses reached upto 60-70 thousand Rs but my husband hadn’t got any relief. We took him back to home and after one day he started to experience respiratory problems, then we took him to Himalyan Institute of Medical Sciences in Jollygrant, Dehradun  where the doctors suggested for operation and to put a tube in his neck. The expenses for a single day for ICU was 20000Rs apart from medicines and operation.
Due to lack of sufficient funds I took him back to home. Due to all this the treatment was getting delayed, which damaged the nerve which was going to the diaphragm, which stopped my husband to take breathe at all, which caused him cardiac arrest. We took him immediately to CMI hospital where the doctors immediately started the treatment and he started breathing on ventilator. There the expenses for a single day for ICU was 15000Rs apart from medicines. I asked from my boss and some other known persons for monetary help so that I can bear 2 days expenses. One of my acquaintance knew the dean of AIIMS Rishikesh through which I got the chance to admit my husband in AIIMS Rishikesh . After the observation of 3 days, doctors asked  to put a tracheotomy tube to save him from pneumonia. I agreed for the same, but he was still not breathing on his own after the operation and below his neck portion that entire body had got no movement. Then the neuro doctors suggested for spinal surgery and let us know about the pros and cons of the same, which can cost upto  1 lakh 80 thousand rupees. I was totally helpless as there was no one to help me and I can’t leave my husband like that then, at this point my husband’s nephew and my uncle helped me monetary wise then the surgery was possible. After the surgery, for food supplements, medicines and the expenses of post op was arranged  by them. After 1 month my husband came out from ventilator support and started breathing on his own then the doctors suggested for homecare to save him from the infections in the hospital so I took him back to home.
However my challenges and fight was still not over as for homecare I have to arrange hospital bed, suction machine, medicines, physiotherapist and food supplements of  high protein and vitamins And also I have to arrange proper hygienic atmosphere to save him from infections and this is a long process of 3-4 months or more and this entire process again requires monetary support as my salary is not sufficient to meet the expenses.
The physiotherapy charge is 400Rs per day, 2000Rs approximately for medicines and food supplements per week and other expenses like suction catheters, urine catheter, diapers, diaper sheets, cotton etc. My salary is only 15000Rs in which all these expenses are very tough to meet then one of my colleagues told me about milaap.
So this is my humble request to help me out from this fight as a winner because my son is also unable to continue his studies.
You can also transfer money in my account

UPI: rzpy.givetomlpbishanba001@hdfcbank (Copy to clipboard)
Or
Click here to read the instructions before you make a bank transfer. 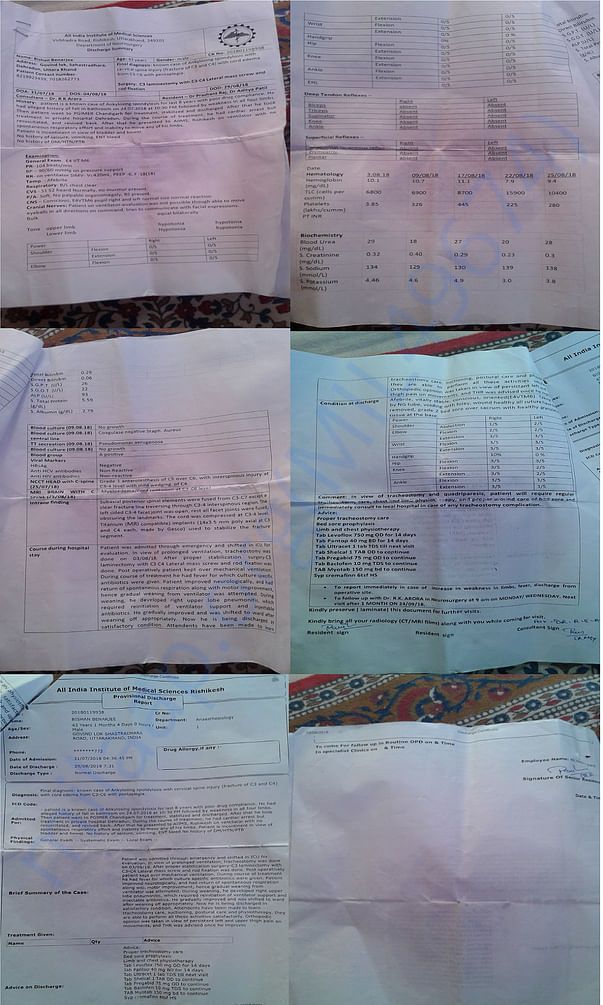 UPI: rzpy.givetomlpbishanba001@hdfcbank (Copy to clipboard)
Or
Click here to read the instructions before you make a bank transfer.

My husband has to undergo the second operation in which the doctors will be removing the tracheostomy. Due to this, my husband has not been able to speak or breathe.

It is my humble request to you to please keep sharing the campaign as we need all the help we can get.

Regards,
Shilpa
Donate
Report fundraiser
See how thousands are crowdfunding for their causes on Milaap
Content Disclaimer: The information and opinions, expressed in this fundraiser page are those of the campaign organiser or users, and not Milaap.
If such claims are found to be not true, Milaap, in its sole discretion, has the right to stop the fundraiser, and refund donations to respective donors.

Donated to this campaign via Paytm? Click here if you can’t find your donation listed below.
AS
Abhishek donated Rs.5,000

Donated to this campaign via Paytm? Click here if you can’t find your donation listed below.
AS
Abhishek donated Rs.5,000

You are sending a message to
shilpa banerjee
Go back 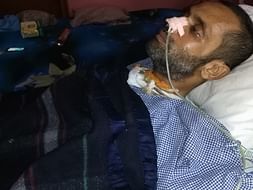