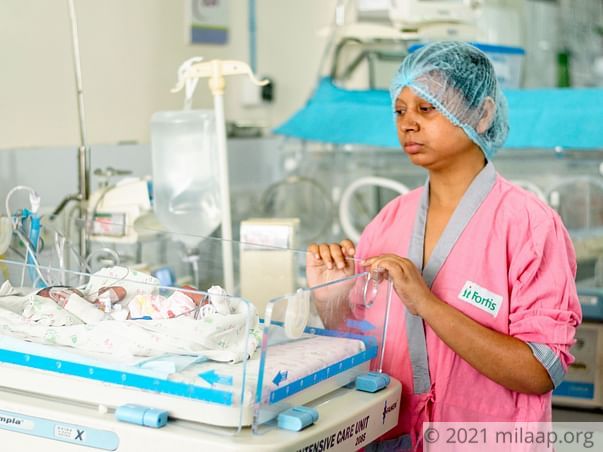 ‘When I said I wanted to be a mother, my doctor said I may not survive the pregnancy. I did, but I'm afraid my baby won't.’ – Nafisa

All Nafisa has wanted in life is to have a baby. She has been struggling with chronic kidney disease, and it worried her to think she may never have the chance. Fortunately, Nafisa did get pregnant. Even with her condition, all reports were normal, at least until the 7th month. Born premature, and just a few days old, Nafisa’s daughter is now fighting to survive, just like her mother.

'With only 2 months left for the delivery, we were counting down the days'

Nafisa was in her 7th month of pregnancy when she started showing signs of high blood pressure. She was feeling dizzy and always nauseous. There was a throbbing pain in her head and when her urine output reduced drastically, Abdul realised that this was getting serious.

“I took her to Fortis, Kolkata and after some tests and ultrasounds, the doctors decided to go forward with a C-section. They said that both Nafisa and the baby’s life would be in danger otherwise - I didn’t really have a choice.”

Instead of her mother’s arms around her, the little baby is covered in tubes

For more than ten days now Abdul and Nafisa’s newborn baby girl is in the NICU. She can’t breathe nor can she feed on her own. She weighs less than a 1kg, while most babies are born over 2.8kg. Instead of being surrounded by the warmth of her mother, she is entwined with tubes and pipes. Nafisa comes to see the baby once in a few days. Her condition has also deteriorated.
Nafisa's little baby is prone to infections - she always wears a cap and a gown when she goes to see her

A Madrassa teacher, Abdul has no one else to ask for help

Abdul teaches Arabic in a Madrassa in small village in North 24 Parganas, West Bengal. He has spent over a lakh on the baby's treatment not to mention more than that on Nafisa through the years. He is not allowed in the NICU and only gets to see his baby through the glass at a distance.

“My daughter is in the NICU for more than 2 weeks now. I have not even seen her face properly. The doctors have told me that she needs to be there for 4 more weeks. It would cost me nothing less than 10 lakhs. If I cannot arrange for it, I may never get to see my daughter alive.”

With your support, these parents can bring their baby girl home