Baby of Indraveena needs your help to survive | Milaap
This campaign has stopped and can no longer accept donations.

Baby of Indraveena needs your help to survive 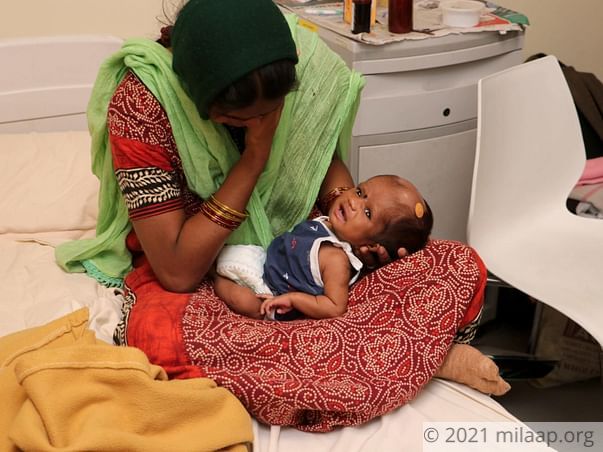 Indraveena and her husband Peddy are now in a strange city, all alone, without any support from their relatives. His birth was celebrated, but just a few days after, his head started growing in size. Their relatives were terrified and refused to even touch him. Some even asked them to give him up. No one thought he would make, but Indraveena and Peddy knew that their baby needs help. Now, the fluid accumulation in their baby’s brain is causing him so much pain that he hasn’t slept a wink. It can cause complete brain damage and even turn fatal without surgery.

Born in a small town in Ananthapur district, Andhra Pradesh , Indraveena's baby boy was just 3 days old when he got jaundice and was in ICU for a week in a local hospital. He seemed to be normal for a few days but slowly he stopped drinking milk and his head was growing bigger. Suddenly, he became unconscious. For a moment Indraveena thought he had lost him. The local doctor said he might not survive the day and even taking him to a bigger hospital wouldn’t help. But the poor parents didn’t want to give up.


"We took him in an ambulance to a hospital in Bangalore. It was a 3 hour journey, and it was the longest 3 hours of our lives. The doctors said that his head is big because of the fluid and it has to be removed immediately. We thought he'll become normal after that. The swelling in his head had reduced but the fluid still accumulates and it is removed every week." - Indraveena.

Despite all odds, these poor parents never gave up. It has been 2 months since he was born but they haven't named him yet because every day is uncertain. Now, their precious baby is recovering and can breathe without ventilator support. However, he needs to fight the infections in his body so that he can get the surgery done. Without the surgery, his brain will be damaged and kill him too.


"I don't know what I did wrong, I did not miss any of the tests during my pregnancy. I keep wondering, was it the fever I had in my 6th month? Is it because I didn’t breast feed long enough? I'll never be able to explain the heart wrenching pain I'm going through. I can't let anything happen to him.” - Indraveena.

"We're already neck deep in debt, the surgery is beyond our means"

Peddy has an acre of land in Anathapur where a large number of farmers have already left agriculture owing to huge debts and failure of crops. He lost crops worth Rs 40,000 last year. Since the day of his baby's diagnosis, he has been borrowing money from his friends. He has spent 2.4 lakh so far. He needs 4 lakh more to continue the treatment. They have come so far because of their strong will power. Their baby has a good of recovery if the surgery is done in time. 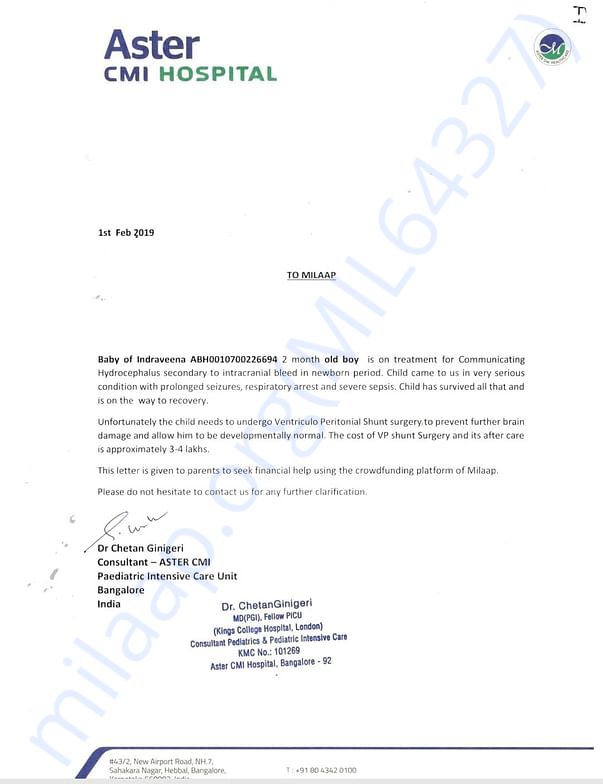 It is my pleasure to tell you that we had gone to the hospital for followup and the doctors said that she is on the right road to recovery. After a brief period of observation, the doctors discharged her successfully. Thank you all once again for helping me save my child.

Baby surgery was done on 28-03-19 and is recovering well. We are going for monthly check-ups. The doctor has suggested the baby to undergo MRI scan after 1 year to check for progress.

Scan & donate with any app
check_circle_outline Download payment receipt
Report fundraiser
Know someone in need of funds for a medical emergency? Refer to us
Rs.582,552 raised

358 Supporters expand_more
This campaign has stopped and can no longer accept donations.
$150 Million +
Raised on Milaap
Are you in need of financial support for medical or personal emergencies, or a social cause?
Start a fundraiser
Or
Know someone in need of funds for a medical emergency? Refer to us
Campaign organizer contact_mail
A
Dr. Dalon Fernandes
Beneficiary: Baby of Indraveena info_outline

Donated to this campaign via Bank transfer/QR Code? Click here if you can’t find your donation listed below.
SP
Sravanthi donated $30

Dear son.. Will pray god for your earliest recovery... May God bless u and the entire family dear..

Allha save the baby

Donated to this campaign via Bank transfer/QR Code? Click here if you can’t find your donation listed below.
SP
Sravanthi donated $30

Dear son.. Will pray god for your earliest recovery... May God bless u and the entire family dear..

Allha save the baby 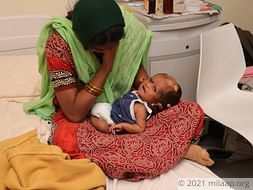 Baby of Indraveena needs your help to survive