Aarti Wished To Work In Bangalore, But Now She Is Here For Treatment | Milaap
Milaap will not charge any fee on your donation to this campaign.

Aarti Wished To Work In Bangalore, But Now She Is Here For Treatment 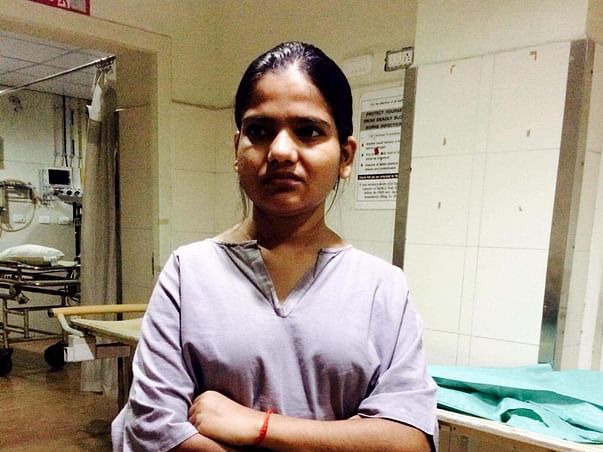 This story has been written on behaf of Subodh (Aarti’s brother).
In May 2015, Aarti suddenly started developing vision issues in her left eye. We rushed to the local hospital. We were praying hard. However, the doctors  said it is not eyes that are causing the problem. "Aankh mai problem nei hai. Shayad kuch brain main issues hai. Aap log jaldi se brain MRI  kijiye”.  And when we got hold of the MRI reports, we were shocked to hear from the doctor that Aarti was suffering from brain tumor.

Aarti planned to work in Bangalore but now she is here for her treatment
I left my family in Bokaro and came to Bangalore to support them. I earned enough just to make ends meet. She wanted to come to Bangalore immediately after her B.Com for a job. But now when she is finally here in Bangalore, we cannot believe that she is here for her treatment.
The
Two years ago, it all started with menstrual problems which subsided after a local doctor’s visit. Aarti was then all okay. But our happiness turned into despair within a week when she started developing vision issues. We immediately took her to the local hospital in Bokaro. After diagnosing, when the doctor’s suggested undergoing a brain MRI, we were extremely worried. We took her to another hospital- Shankar Eye Hospital hoping to believe that things will be alright But fate had something else stored for Aarti. The doctors did not find any abnormalities in the eye, so a brain MRI was urgent.
Major setback was when we heard Aarti suffer from Brain tumor

The last thing we could imagine for our sister was to see her suffer from Brain tumor. We did not know how to react. The then doctors in Bokaro, referred us to NIMHANS, Bangalore for further examinations and treatment.

Although I knew the estimated expenses for the treatment would be quite high, I wanted to get her treated in the best hospital in our city. It was only her happy smiling face that kept me going.
Even the doctors suggested her case to be a critical one
We came to Bangalore in February 2017. I still remember that day, the very moment she put her steps in the Garden City. Her happiness was all written over her face. This is where she always wanted to work. But now when she realized she would not go to some corporate, rather to some hospital, her joy turned into despair.

When we initially took her to NIMHANS, the size of her tumor was 3.5 cm. After diagnosing thoroughly, the doctors prescribed a medicine for 4 months and asked us to visit again in the end of June. But much before June, we visited the hospital, since Aarti lost her vision in her right eye too. Things turned out to be really complicated since by then, the size of the tumor increased to 5.5 cm.


Initially her case was thought to be a Prolactinoma tumor. However, the sudden growth of the tumor intensified the situation. Aarti underwent a surgery, partial decomposition of the tumor, on 7th July 2017. The biopsy report revealed that hers is a case of Supraseller Germinoma and further treatment would be done using radiation.
How you can help
The family has already spent more than 2.5 lakhs for Aarti’s treatment. She is now admitted in the hospital and needs to be hospitalized for another 6 weeks for daily radiation. The cost for this is another 1.2 lakhs. They have exhausted every bit of savings they had and now needs our help. 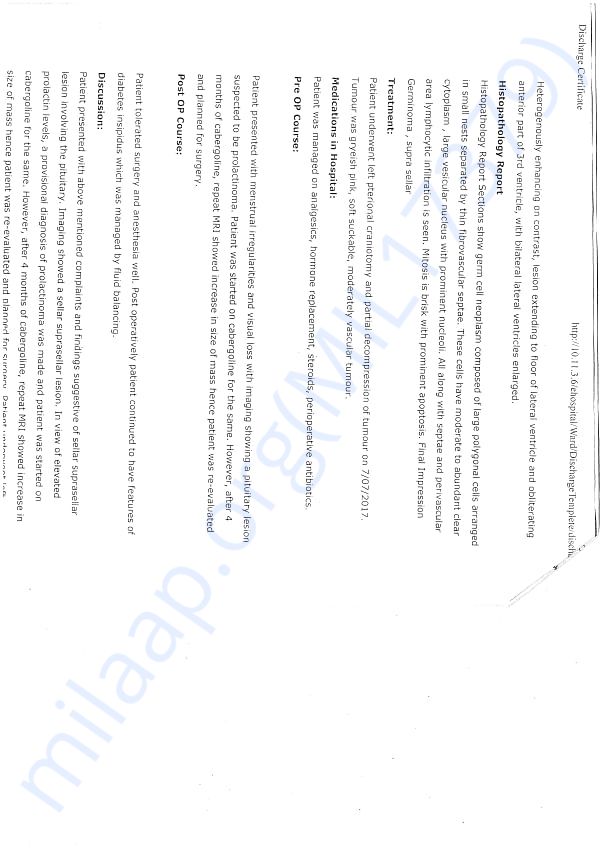 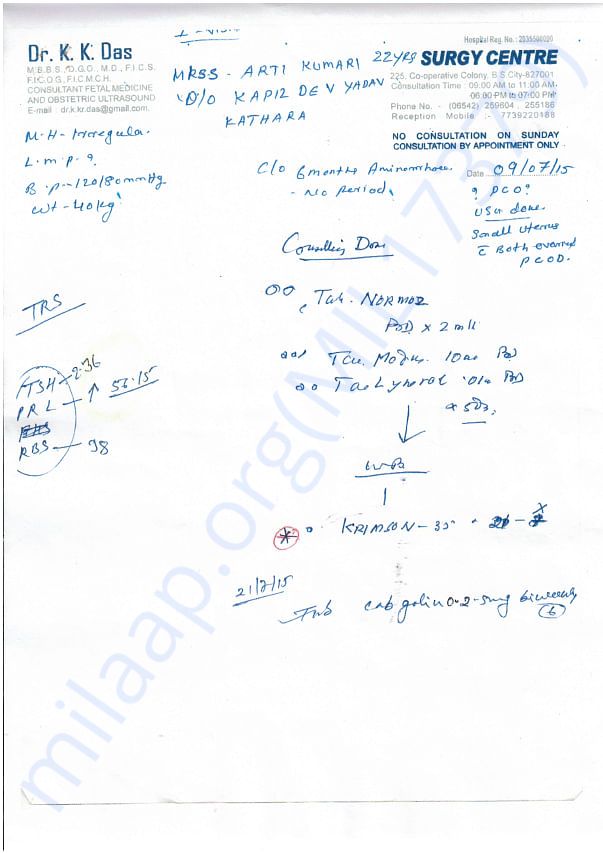 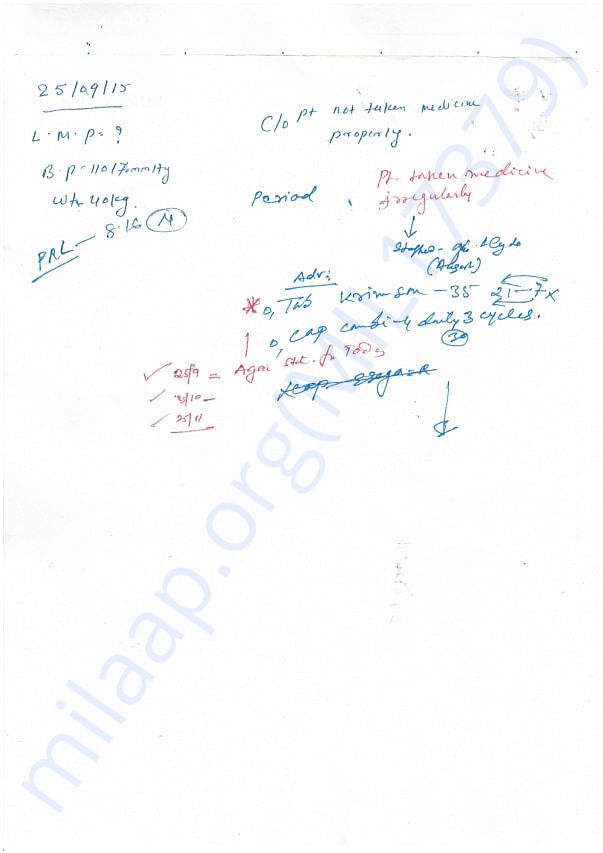 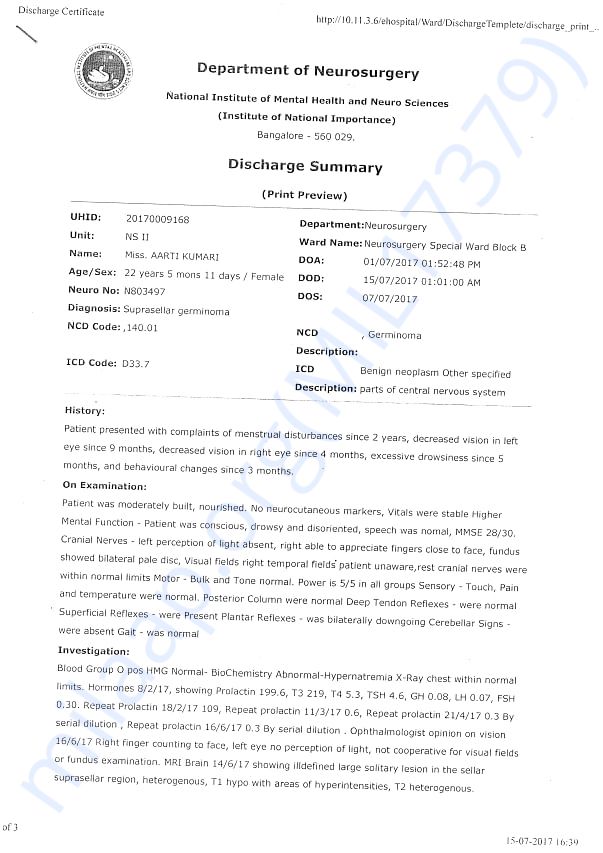 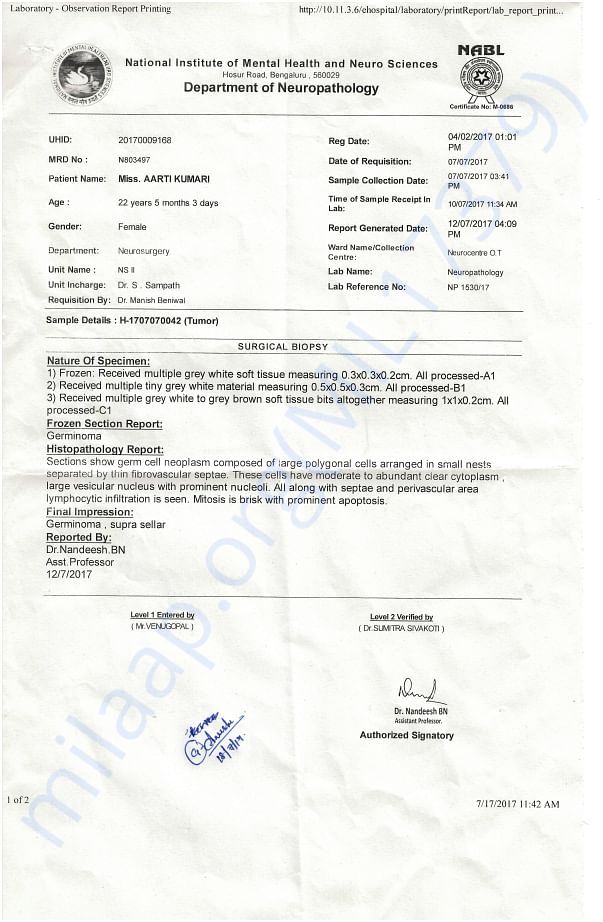 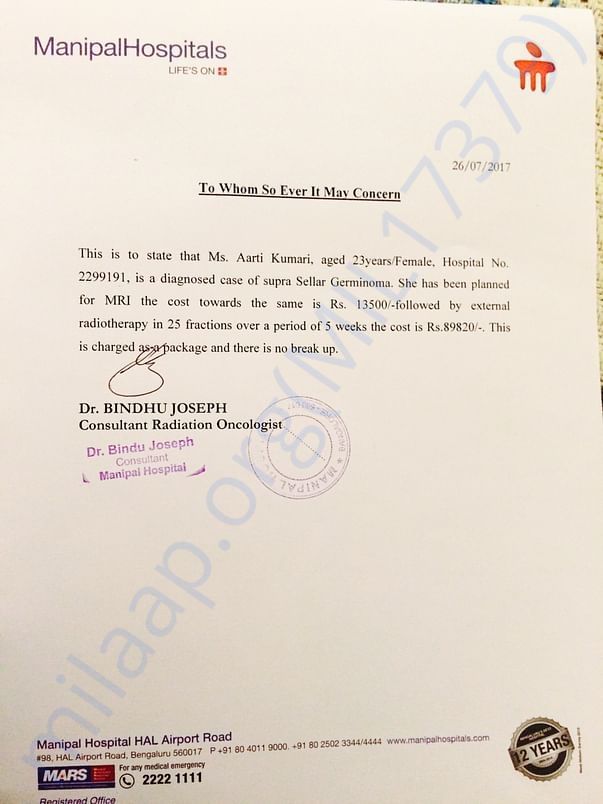 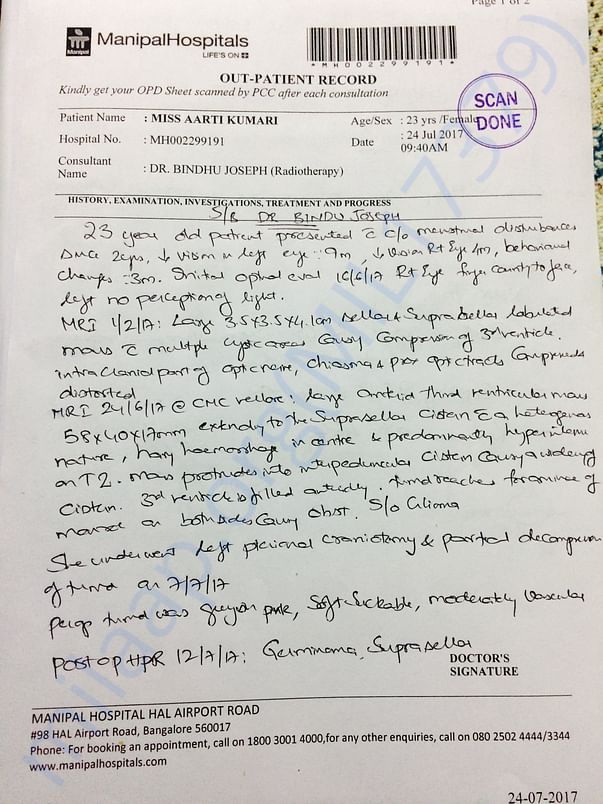 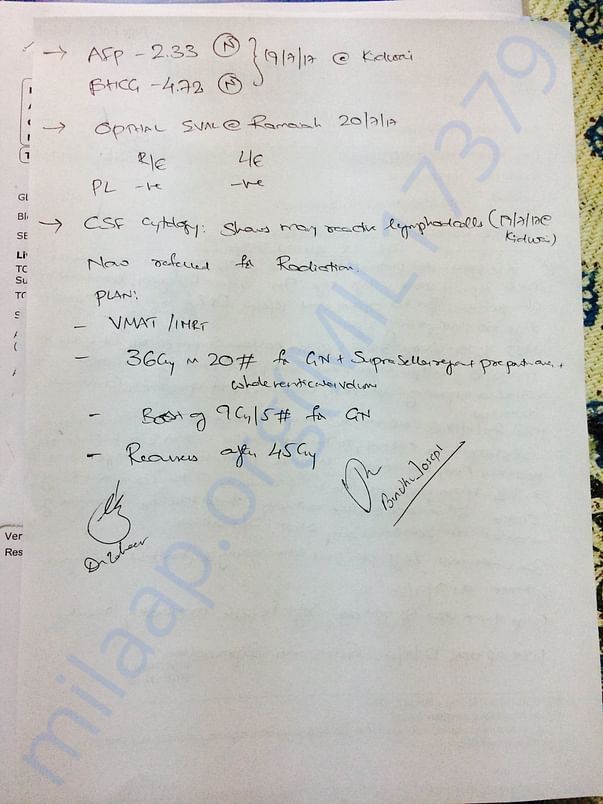 Here is an update on Aarti.
Aarti is undergoing radiation treatment and is recovering slowly. The doctor said that it may take 2 years to recover, but she is better than earlier.
Thank you all of them for the support. I don't have any words to express for your help.

Thanks and Regards,
Subodh
Dear Supporters,

Here is a quick update on Aarti's health. She is doing better now compared to earlier. She is undergoing radiation therapy. She is done with 21 sessions out of the prescribed 30 sessions. Her response to the treatment has been good so far and there are no side effects as such.

She is not able to see properly with her left eye. After completing the treatment she will be visiting an ophthalmologist, to get ascertain whether she will be needing a surgery or not. Thank you for all the support you have shown Aarti. Would request you to please pray for her speedy recovery.

Thanks and regards,
Subodh.
Donate

Scan & donate with any app
check_circle_outline Download payment receipt
Report fundraiser
Know someone in need of funds for a medical emergency? Refer to us
Rs.60,373 raised

You are sending a message to
Subodh Kumar
Go back 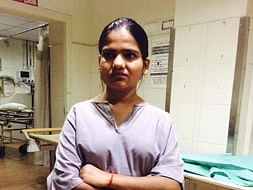 Aarti Wished To Work In Bangalore, But Now She Is Here For Treatment