Within 24 Hours, 14-Year-Old’s Cancer Damaged His Organs, Needs Help | Milaap
This is a supporting campaign. Contributions made to this campaign will go towards the main campaign.
This campaign has stopped and can no longer accept donations. 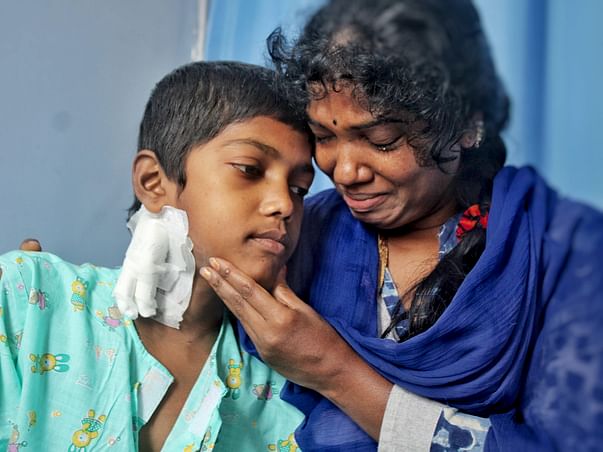 “My son was the topper of the class. But today he is in the cancer ward, unable to breathe, sleep or eat. A day after we found out he has cancer, it had already badly affected his lungs and caused kidney failure. Every time he tried to even lie down on the bed in the ICU, he would start gasping for air. Cancer is affecting every part of his body and only making him weaker by the day.” – Subhashini, Harshavardhan’s mother
While other children his age ran out to play after school hours, Harshavardhan (14) would get back home to do his homework. He’s an extremely dedicated student, who worked every day towards one dream – to go to the best college in the country. Unfortunately, all Harshavardhan’s dreams have now come crashing down. Cancer has consumed his life and he can barely move without wincing in pain. Harshavardhan might not even make it to his next birthday, let alone college if he doesn’t get treatment urgently.
Harshavardhan’s bright future is now in the clutches of cancer
Last month, Subhashini noticed that her once healthy teenager was suddenly looking frail. He seemed tired all the time, and even the news of him topping his class didn’t make him happy like it used to. Shubhashini knew something was wrong. Amarnath and her took him to a local doctor, but the medicines had no effect. Instead, she noticed that there was a growing swelling in his stomach.
“We borrowed 20,000 from our relatives and took him to Bangalore to get checked. In two days his condition deteriorated so much that he was admitted to the ICU. We didn’t know it was cancer then. The doctors were still running tests, and my husband and I stood outside the door of the ICU all day, waiting eagerly to find out what was happening to our son. When the doctor said it was cancer, we couldn’t believe it. It was something we’d seen only in films. To watch our son struggle to breathe, tears running down his face as he helplessly sits on the hospital bed is the most heartbreaking sight.”
Cancer will spread rapidly and kill him without chemotherapy
Harshavardhan has lymphoblastic lymphoma a rare, fast-growing form of cancer that starts when the white blood cells become abnormal and grow in an uncontrolled way. The abnormal white blood cells build up in one or more parts of the body. Harshavardhan’s cancer has now affected his lungs and kidneys, and he was started on dialysis. However, the only way it can be stopped from spreading to the rest of his body is with chemotherapy.Unfortunately, his helpless parents don’t even have the means to afford his blood test anymore. Chemotherapy is beyond their means.


His helpless parents can’t even afford a meal and are struggling with his mounting medical bills
“We don’t even enough to afford a meal anymore. When relatives come to visit us in the hospital, they bring along fruits and sometimes home cooked meals, and we eat whatever they get for us. We’re saving every rupee we have, to ensure that he gets the right treatment in time. Even if that means we go to bed hungry. But despite all our efforts, we can’t afford to continue his chemotherapy.”


Subhashini and Amarnath have a small grocery store in their hometown Kotnur, Andhra Pradesh. They earn around 700 per day, but after spending nearly 4 lakhs on his tests and treatment so far, they have nothing. Harshvardhan can survive with chemotherapy, but his parents can’t save him without your support.

How You Can Help
In the hospital, all Harshavardhan thinks about is home and all his books that now lay untouched. He loved to read, but Harshavardhan doesn’t even have the energy to even sit up now. His mother is devastated watching him suffer and can’t help but break down every time she sees him. Harshvardhan can be free form the misery and trauma of cancer with chemotherapy, but he needs your support to get treated in time. Harshavardhan can have a chance at having the bright future he's been working for, with your help.
Estimation letter 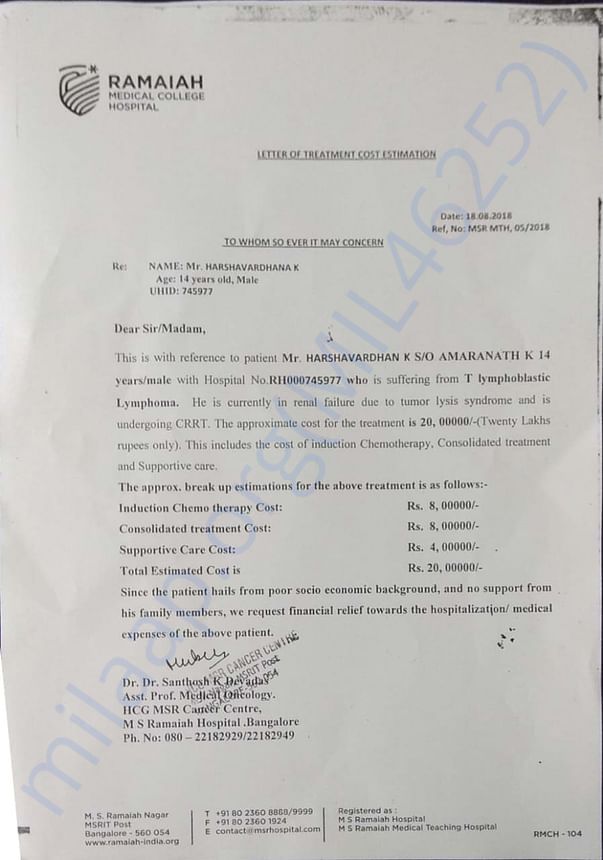 Harshavardhan is doing well. Harshavardhana got admitted for  chemotherapy and got discharged on 06.03.2019 and currently he is stable and is recovering.

Harshavardhan is doing well. He is undergoing his treatment and is responding well to the treatment. He is stable and recovering.

Donated to this campaign via Paytm? Click here if you can’t find your donation listed below.
N
NagaSwetha donated Rs.1,000

My entire prayer is with you my boy.

Donated to this campaign via Paytm? Click here if you can’t find your donation listed below.
N
NagaSwetha donated Rs.1,000

My entire prayer is with you my boy.

You are sending a message to
Sreenivas
Go back 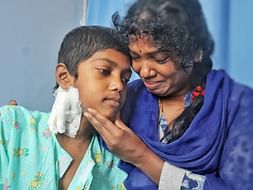