Fisherman Cannot Afford To Save 16-Year-Old Who Needs Urgent Treatment | Milaap
This is a supporting campaign. Contributions made to this campaign will go towards the main campaign. 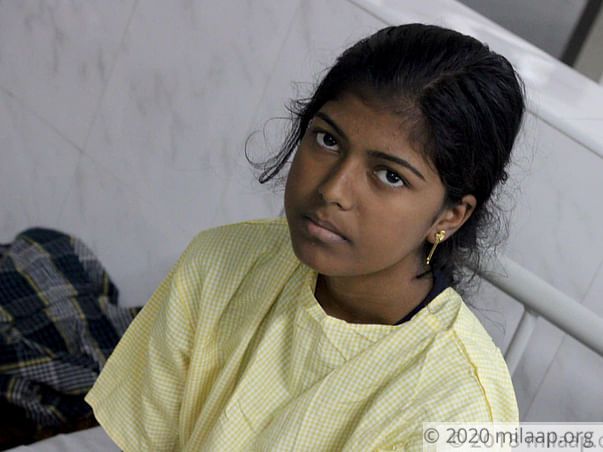 Greeshma is the youngest daughter of John and Suja.  Hailing from a small village in Kanyakumari, she did not have much exposure to the outside world but that never seemed to be an obstacle for this young girl. She learnt to sing, dance and paint by herself, without taking any lessons. She also excelled in studies and her parents were proud of her. But what make her special is her indomitable spirit. When their whole village was affected with Ockhi cyclone last year, and when her own father couldn't go fishing for a long time, she was hopeful that God will show them the right path. She has always been the only ray of hope in her parents' life. But now she is fighting for her life, becoming weaker day by day due to a very rare life-threatening disease and her parents are completely devastated.

Greeshma has always been an active person. She never had any significant health problems, she has hardly fallen sick. However, last year, she suddenly started to bleed from her nose. Initially, her parents mistook it for a small injury but they got scared when it happened frequently. Her parents took her to a nearby hospital and she was given medicines. The bleeding subsided after a few months, but before they could feel any kind of relief they had another shock. She had a swelling in her neck that kept increasing in size. She started throwing up everything she ate or drank. It was then Greeshma was diagnosed with a rare disease called Rosai Dorfman disease which involves the overproduction of a type of white blood cells and slowly damages the tissues. Her parents were shell-shocked on hearing that she needs a chemotherapy cycles to recover completely.


"We have never heard about this condition anywhere, we realized it was serious when doctors told us that she needs chemo. We told her that she just needs blood to gain strength but we couldn't keep the truth away from her for a long time. She broke down for the first time when she found out she that she would need chemotherapy for 1 year. She thought she has cancer. The doctors told her it is not cancer and she can go home soon. But the pain and suffering grows everyday. I can see the fear in her eyes." - Suja, Mother.

Greeshma took a lot of medicines and injections, but it did not help her. She suffers from severe respiratory distress. Despite all the odds she managed to give her exams and always checked with her friends about the lessons. But last month, her condition deteriorated. She is not able to walk or eat anything. She keeps asking for her two elder brothers. She asks, 'Amma, will I ever see our home again?" She was hopeful that she would go home soon but it seems to be a never-ending journey. The fact that her parents cannot afford the treatment adds to her worries.


An old pic of Greeshma

"She cries in silence all night, she prays to God to save her life. We have never seen her feeling so low. She is begging me to take her home. I dread the thoughts running through her mind. I have no strength to console her. She is our only hope and strength and losing her would mean losing everything," - Suja.

Greeshma's father is a fisherman. After the Ockhi cyclone, their lives have turned upside down. He struggles to make ends meet, and yet, they did not give up hope, they continued to fight against all odds. But Greeshma's unexpected diagnosis have taken away all their hope and strength. Her brother Jothi (22), completed 12th grade and didn't continue his studies. Her younger brother Pramod (17) only studied till class 8, dropped out of school to support the family. Unfortunately, both haven't managed to find a job till now.


"When there is not enough food at home, everyone waits for our daughter to eat first. Her brothers have skipped meals and made sure she doesn't starve at any cost. Now, she is not able to eat anything and we can't bear to see her suffering. So far, we managed by borrowing money from everyone in our village. She needs 6 cycles of chemo and it costs 6 lakhs. How can I arrange such a huge money? I'm scared that I might be forced to stop the treatment without money." - John.

16-year-old Greeshma, a once- active girl is now battling for life due to a rare disease that over produces white blood cells and damages her tissue. If left untreated it can be life-threatening. She is in constant pain and throws up everything that she eats. She needs 6 cycles of chemotherapy to recover. Her father, a poor fisherman, has nothing left to afford treatment. Now, only your help can save this girl and help her live a normal life.

UPI: rzpy.givetomlpgreeshma006@hdfcbank (Copy to clipboard)
Or
Click here to read the instructions before you make a bank transfer. 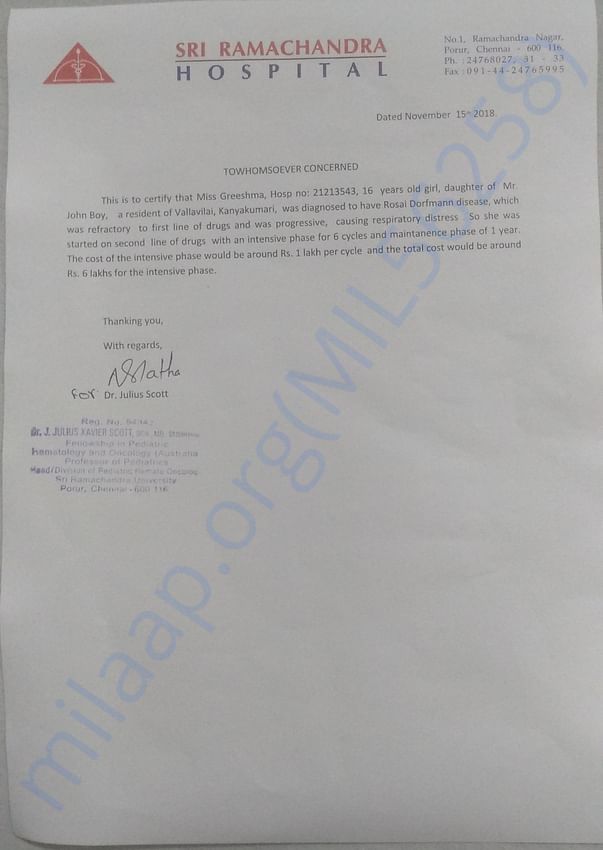 UPI: rzpy.givetomlpgreeshma006@hdfcbank (Copy to clipboard)
Or
Click here to read the instructions before you make a bank transfer.

A heartfelt thank you to all of you for the constant love and support!

Greeshma has completed 2 cycles of Chemotherapy. She will go to the hospital for her next cycle. She has slight improvement in her condition. Once the reports are out, further course of treatment will be decided.

Will keep you posted.

Donated to this campaign via Paytm? Click here if you can’t find your donation listed below.
VI
Vije donated Rs.500

Donated to this campaign via Paytm? Click here if you can’t find your donation listed below.
VI
Vije donated Rs.500 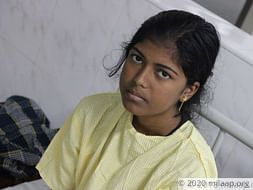