15-Year-Old Who Aspires To Become A Doctor Needs An Urgent Transplant | Milaap
This is a supporting campaign. Contributions made to this campaign will go towards the main campaign.
This campaign has stopped and can no longer accept donations. 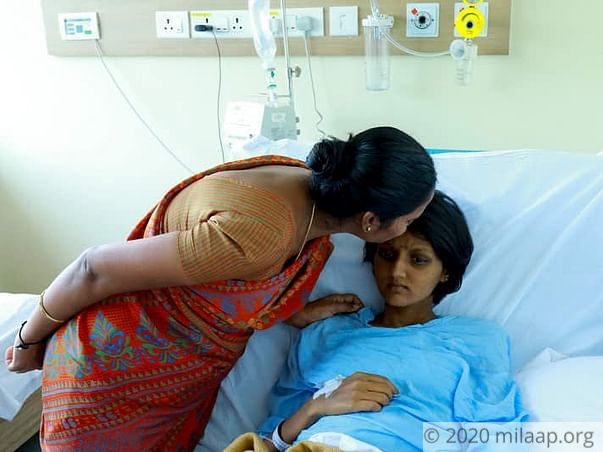 15-year-old Sathya, the only child of Vasuki and Kanagaraj grew up healthy and was full of energy. She was keen to learn new things every day and a quick learner too. Science has always been her favourite subject and she was studying hard for her 10th board exams.  From a very young age, she wanted to become a doctor, and often borrowed science magazines and sci-fiction from the local library. This young, intelligent girl's happy life turned tragic in a very short span of time. It has been three months since she went to school, now she finds it difficult to even get out of bed. A deadly liver disease threatens her life and she has no energy to even speak now. She cries because she's missing all her classes and worries that she may not be able to write her exams due to lack of attendance, not knowing that she'll lose her life without an urgent transplant.

Three months back,  Sathya had severe swelling in her leg and eyes turned yellow. She was diagnosed with jaundice and was admitted to the hospital for a week. Her parents thought she would recover soon but her condition kept getting worse with every passing minute. She found it difficult to even walk a few steps. Every time, she tried to get ready for the school, she wilted like a flower. Her parents knew it was something serious but were never prepared to know that their daughter's liver is completely damaged. She is diagnosed with Wilson's disease, which causes the liver to store excess amounts of copper until it becomes saturated and eventually, the accumulated copper starts to destroy the liver and also enters the eyes and the brain. Doctors said that only a liver transplant can save her life.


"She has been in extreme pain for the past 3 months. No medicines could ease her pain. Her condition became worse last week, she could not eat anything and she threw up everything, even water. The fluid accumulation in her stomach was drained thrice last week. She has no energy at all. I can't bear to see her suffering so much."- Vasuki, Mother.

Sathya lives with her parents in Coimbatore. Since the diagnosis, she was not able to go to school. She is in constant pain and the swelling in her legs has not subsided till now. Last week, she fell terribly sick and as doctors suggested, she was brought to a hospital in Kochi. Doctors told them that the liver transplant should not be delayed further and she needs it at the earliest to save her life. Despite the pain, Sathya only thinks about her school and board exams.


Sathya before the diagnosis

"Most of the time, she has no energy to speak, she just tosses around in pain. When she is able to speak, she asks only about her school. Even her teachers came down to visit her, and said she can give her exams directly despite missing classes, they are confident that she can do well. Yet she feels restless." - Vasuki.

Kanagaraj works in a small mobile shop and earns Rs 7000 per month. With his meager income, he managed to feed his family. He worked hard and was determined to provide the best education for his daughter. Sathya's passion and her extraordinary performance in academics, were convincing enough that she would become a doctor. He even started saving money for NEET coaching class. He and his only talk about her, she was the only hope in their life. But the uncertainty of her life at this young age has shattered them beyond words.


"I have never taken a single day's leave. I know I had to work hard to get her admission in a medical college. I saved every rupee possible but now all that has gone for her treatment. I have spent everything I had and borrowed 2 lakh, yet it is not enough. I'm running of time but I do not have a rupee at hand. I need 15 lakh for the transplant, I can't even imagine such huge amount. I don't know what I can do to save her life." - Kanagaraj.

15-year-old Sathya is battling a deadly liver disease and needs an urgent liver transplant to survive. Her parents are struggling to save their only child. Her aunt is a matching donor but they do not have anything left with them to afford the transplant. This young girl who dreamed of becoming a doctor one day won't survive without your help. 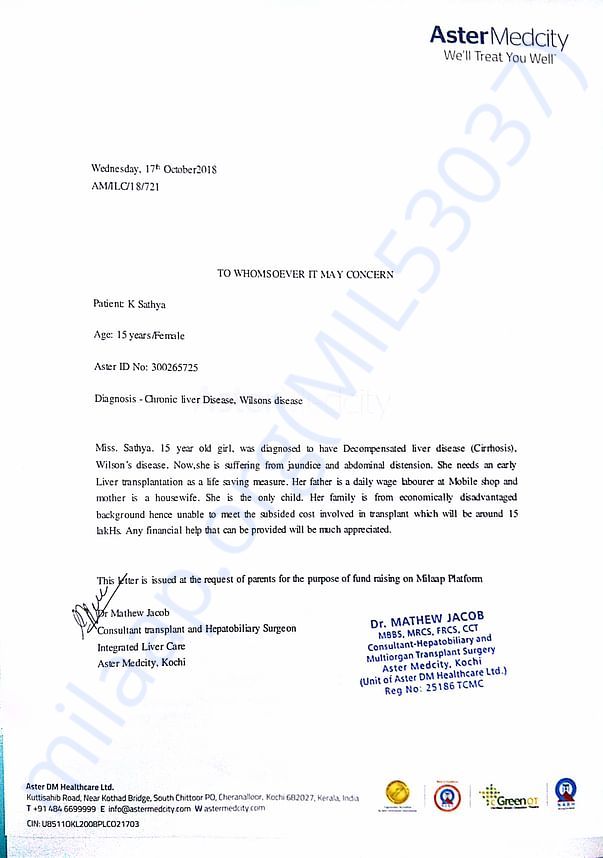 We are overwhelmed by the love and blessings you have showered on Sathya.

With a heavy heart, we regret to inform you that Sathya is no more. She was shifted to the ICU wherein she did not respond to the treatment, leading to her death.

Please find below the letter issued by the hospital -

All the donations were utilized for her medical expenses.

We are thankful for all the love and support you have shown! We request all of you to pray for her family to recover from their loss and for her soul to rest in peace.

You are sending a message to
T Sharan
Go back 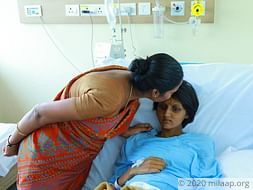