GlobalHeroz - An initiative to help people all over the world. | Milaap
This campaign has stopped and can no longer accept donations.

GlobalHeroz - An initiative to help people all over the world. 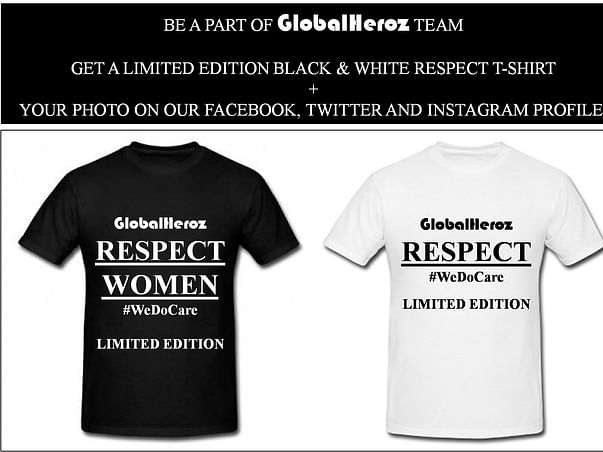 Allow me to first introduce myself and my motive behind GlobalHeroz.
My name is Himanshu Rajput, a Marketing Post Graduate from Middlesex University, London, United Kingdom. My motive behind GlobalHeroz is to be a social entrepreneur and protect our planet. GlobalHeroz is both my career and passion, as i want to earn by selling GlobalHeroz T-shirts and Donate 1/3rd of profit to NGOs and Social Projects. 'All i want is to inspire others and want someone to look at me and say because of you i didn't give up.'

GlobalHeroz is a team of people working together to protect the world and support others. Every person can be a part of the team by purchasing a GlobalHeroz T-shirt.

WeDoCare: "Tagline of GlobalHeroz", tell the world that we do care about others.
Vision: To inspire others in making the world a better place to live by protecting people, animals and natural resources.
Campaign: GlobalHeroz will be running a lifetime 'RESPECT' campaign, in which 1/3rd of profit will be donated to NGOs and social welfare projects related to environment, people welfare and animal protection. The most important part of this campaign is 'RESPECT WOMEN' in which 50% of profit will be donated to women specific NGOs and social projects.
GlobalHeroz on Social Media: Facebook, Instagram and Twitter
GlobalHeroz blog: https://globalheroz.wordpress.com/

Please click here for the images of GlobalHeroz T-shirts.

How GlobalHeroz will donate to NGOs and Social Welfare Projects?

Rewards for contributing through MILAAP

The Risks and Challenges

How these Funds will be used?

Donated to this campaign via Paytm? Click here if you can’t find your donation listed below.
TS
Trivendra donated Rs.100

Donated to this campaign via Paytm? Click here if you can’t find your donation listed below.
TS
Trivendra donated Rs.100

You are sending a message to
Himanshu Rajput
Go back

GlobalHeroz - An initiative to help people all over the world.