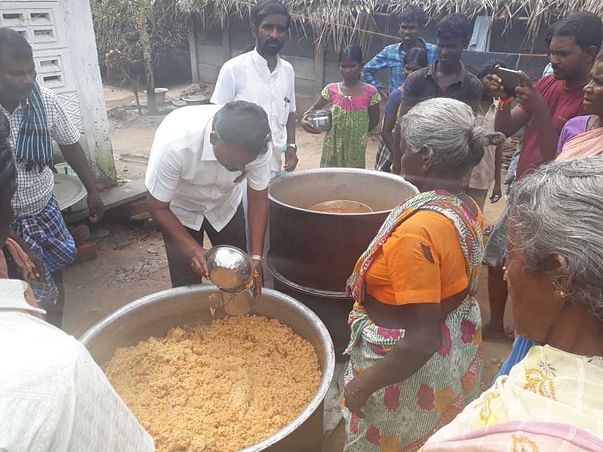 An urgent appeal to provide help to people who are affected by Cyclone Gaja.

The gale winds of Cyclone Gaja have wreaked havoc in Tamil Nadu’s delta and coastal districts. Leaving many people homeless and destroying crops and infrastructure, Cyclone Gaja has brought normal life in these regions to a grinding halt. Thiruthuraipoondi, Thanjavur, Pattukottai, Pudukottai, Nagapattinam, Dindigul, Tiruvarur, Cuddalore are some of the districts that have suffered major damage due to the calamity.

At least 40 people were killed in this severe cyclone. As many as 82000 people were evacuated before the cyclone.  The cyclone has uprooted more than 200000 trees (predominantly coconut trees) and has damaged several electric poles and crops in the state. Boats were blown away and fishing industry is totally affected and therefore people’s livelihood is at stake.

Our Ashram is currently doing relief work, so we know the real situation there and we were able to identify the right people who are most affected by this catastrophe.

There are many people who stay homeless and foodless in various places. Since the road facility is really bad, the relief measures by Government and other NGO's couldn't reach all those poor people. We have a team to identify those hard to reach places with the help of local people.

Our Ongoing Activity:
1. Identify hard to reach areas where people suffer without food & shelter
2. Cooking food in the nearby area and take them to the affected areas and distribute them. (2 tonnes of Cooked Rice has been given directly so far)
Video
3. Providing Tarpaulin to people whose house roof is damaged

Although we have been providing food & tarpaulin for last 10 days, we see there more people in remote areas where there is no proper transportation are still suffering without food & shelter.

Our Team is ready with the ACTION PLAN to help those people. But to achieve the above, We need Money for:

Total Estimated cost will be around 1380000 INR

While this money will not compensate entirely for all that they have lost, this will at least help them to be alive and get started and most of all lead them to believe in the goodness of the world!
About us:
Satguru Charitable Trust, a registered non-profit charity organization, is appealing to you to help us to provide immediate relief to the people affected in these villages. We have been receiving calls directly from the people in affected areas and we go directly to these villages for providing relief work. All these funds raised will be used to provide Food and Tarpaulin for the people in these villages.

Your kind-hearted generous contribution to help them during this difficult time is highly appreciated.