9-month-old With Down Syndrome Needs Urgent Heart Surgery | Milaap
This is a supporting campaign. Contributions made to this campaign will go towards the main campaign.
This campaign has stopped and can no longer accept donations. 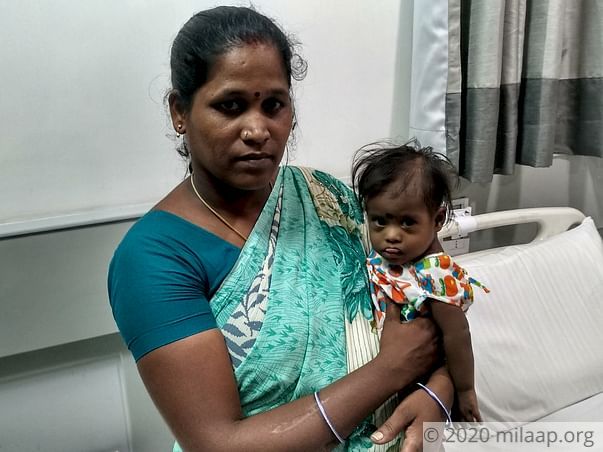 When the doctor gave our baby girl, Manju, into my hands for the first time, I cried tears of joy – she had wispy hair and a smile that I still cannot forget – she was perfect. I remember my husband, Manikandan, asking, “Selvi, do you think her eyes are a little different?” But I thought she was fine. But little did I know that my baby would not only have Down syndrome, but also a defective heart that cannot go on working well without a surgery.

“For up to two days after her birth, Manju did not latch on to my breast properly. I was worried for her health, but the doctors told me that she would be alright. She did eventually learn how to suckle properly, but I noticed that there was something different about her. She was slower,” recalls Selvi.

When she was 3 months-old, Manju vomited milk through her nose and mouth, and a couple of tests later, the family learned that their beloved ‘Paapa’ had both Down syndrome and a severe heart condition. Even today, she cannot drink milk to her heart’s content. She always ends up vomiting, sweating and crying uncontrollably if she tries to do so. Selvi has tried to feed her in different positions, but nothing worked out well so far.


“I was gasping for air and crying uncontrollably when the doctor told the sad truth about Manju. I kept on telling him that I had no issues in pregnancy, how can this happen, etc. I didn’t know what mistake I had done for my baby to be affected this much. He said that she needed a surgery urgently, and we have been trying to arrange funds since then,” Selvi adds.

A healthy 9 month-old should weigh at least 6.5 kg, baby Manju weighs less than 5 kg. She has not started to stand up or sit up on her own, unlike normal babies. She hasn’t even started babbling yet, and only smiles at her mother when she needs milk.

“My poor baby doesn’t even cry to signal that she is hungry. I have to take cues and understand that she maybe hungry or famished. I hope she gets alright soon. Her father works hard to provide for all of us and is hardly at home. He cannot bear to think that he might lose his child and is trying to work overtime to put aside some money for her surgery,“ says Selvi.

Manju’s mother gets nightmares about losing her child

“I cannot sleep properly at night. Every day, it is the same dream I see – the doctors telling me that Manju cannot survive without a heart surgery. The next thing I see is Manju slipping away from my hands into a hole on the ground below. I wake up crying in the middle of the night, just to see my baby sleeping peacefully next to me. The doctors have told me that nothing will happen to Manju if the surgery is done, and she can also grow up to be fairly healthy. But I am scared we will lose her before that,” says Selvi.

Selvi’s elder daughters – 10-year-old Hemavarshini, 9-year-old Vinothini and 5-year-old Madhumitha dote on their youngest sister. When Selvi and Manikandan told them about Manju’s condition, the eldest, Hemavarshini, broke down. The others followed suit and stopped only when little Manju looked at them alarmingly. Since then, they have been helping their mother in taking care of their sister. But every day before bed, they ask their mother if Paapa will be alright. Manju says yes, but even she is unsure whether they will be able to do the surgery because they have no money.

Baby Manju’s father, Manikandan, works as a helper in a small tiffin shop in a village near Cuddalore. He had to borrow money from private moneylenders to pay for all hospital expenses till now. Manju’s open heart surgery will cost Rs 3 lakhs, and he has not seen that amount in his life till now. His family members are poor and he cannot ask them for help. He needs to feed five mouths, excluding himself, and cannot arrange for Manju’s surgery in time.

Your contribution can help this family.
Estimation letter 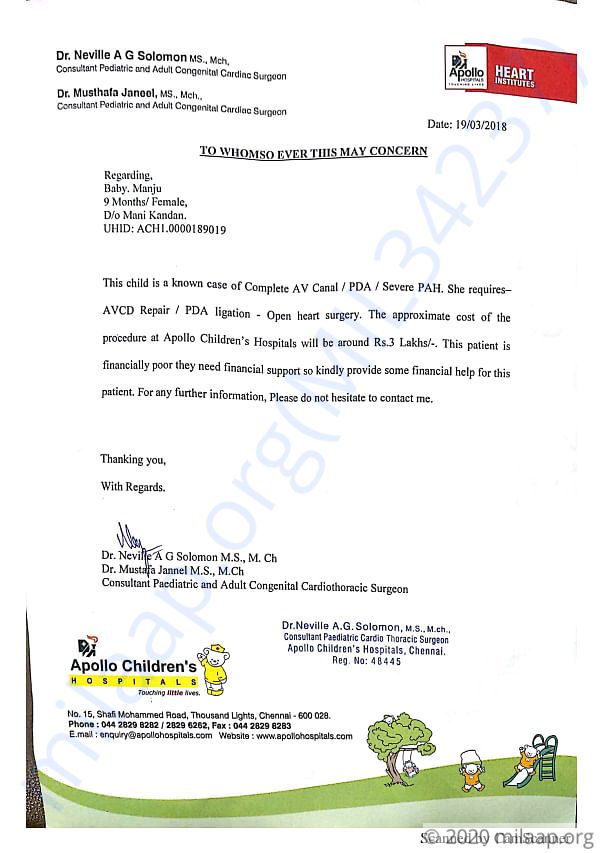 Baby Manju is no more with us. Baby Manju was undergoing her treatment but her health deteriorated and she couldn't make it.

All the funds raised will be utilized to clear her medical expenses.

May her soul Rest in Peace.

Regards,
Gayathri
Donate
Report fundraiser
See how thousands are crowdfunding for their causes on Milaap
Content Disclaimer: The information and opinions, expressed in this fundraiser page are those of the campaign organiser or users, and not Milaap.
If such claims are found to be not true, Milaap, in its sole discretion, has the right to stop the fundraiser, and refund donations to respective donors. 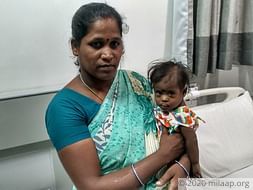