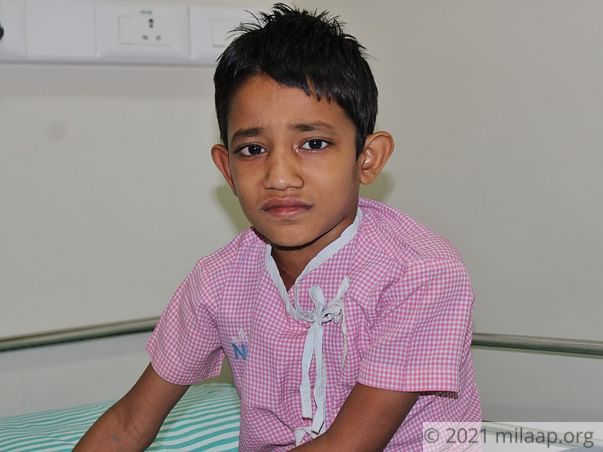 “He said he wanted to go to the hostel because he was scared of what his father would do to him. He asked me to go with him, I just smiled. I want the best for my children. I put him in a government school hostel and visited him every 2-3 months, depending on how much money I had left. We were somehow managing to get by. Now I have to fight for his life."

One night in December, Renuka received a call from Gajendra’s school, just as she was preparing to go to bed. “Gajendra has a very high fever, I think it’s best you come to pick him up,” the lady on the other line said. Panicked, Renuka pulled out the small purse where she kept her money and saw that she had just enough to travel to her son’s hostel. Her alcoholic husband had not returned home in two days. She knew this was a lone battle.

“When the doctor told me Gajendra has cancer, I was terrified. I took him to Bengaluru for treatment. I got enough money to travel and pay some fees but I cannot afford Gajendra’s chemotherapy which he needs for at least 6 months.”

Renuka and her three children have never had an easy life. At home in Raichur, she works as a tailor and earns barely Rs. 30 for stitching a blouse. Her husband, an alcoholic, comes and goes as he pleases and has never been of much emotional or financial support. His violent nature also made the family fearful. Gajendra, although the youngest, is the most sensitive.

“My husband has refused to help. He has not even come to Bengaluru with us. A few people from our hometown live here, and we’re staying with them for now. It’s almost 5 PM now and we haven’t had lunch today. I don’t mind starving, but I can’t watch my son suffer because of me. He’s already in so much pain because of cancer. I just don’t have the money.”

At 10, he could lose the battle to cancer without help

Gajendra doesn’t know he has cancer. Watching his mother breakdown in front of him sometimes, he senses that something is gravely wrong. He asks her when they can go back home again. Renuka is trying her best to stay strong and bear the expenses of the treatment – but she’s struggling. With less than a few hundred rupees (that she borrowed) left with her, Renuka has no way to afford the 12 lakhs for his chemotherapy.

Your support will save Gajendra from this gruesome disease.