We have very unfortunate news to share. Sriram passed away early last morning.

Sriram survived the first 21 days of heavy chemotherapy. His WBC count was fluctuating. The bone marrow test results were unfavourable. Sriram wanted to spend his last few days in his native place. His parents were not ready to give up and tried Sidha treatment. Sriram was undergoing transfusions in a local hospital near his place. But on Monday, his pulse rate started dropping.

From the funds raised through Milaap, Rs 4,57,240.00  was transferred to Apollo hospital for his treatment expenses. Rs. 1,70,481.00 was given to Sriram’s father to settle the medical bills and continue blood transfusions at his native place.

Even at this time of grief, Sriram’s parents have generously come forward to transfer the rest of the funds to another child suffering from a similar condition. They wanted to convey their heartfelt thanks to each of you for your contribution and prayers. We pray for Sriram's soul to rest in peace.

We will keep you posted on which child will receive the remaining funds from Sriram’s campaign. Thank you for all your support!


"HEARTS THAT CARE ARE HOLIER THAN LIPS THAT PRAY

I am Jaikumar f/o J.Sriram(12 yrs). He is my only son. He is suffering from "Acute lymphoblastic leukemia". He was first diagnosed with this condition in April 2014 and as per the doctor's advice we were giving a maintenance chemotheraphy called regimen "B" protocol. We spent more than 12 lakhs for this treatment.

In May 2015, the disease had relapsed .The doctors suggest a BONE MARROW TRANSPLANT(BMT) and STEM CELL TRANSPLANT. His stem cells did not match with me or my wife. So Dr.Revathi raj has found a donor matching his stem cells.

He is admitted at Chennai Apollo hospital (Teynampet), where his Bone Marrow Transplant surgery is to happen by the end of July. His IP no 1125 ,hospital no 275894.

He was admitted in the hospital on June 4th 2015 and is under medication now. First he was treated for some infections for which I had spent around 5 lakhs with help from people like you. The estimate given for BMT is  RS.25 lakhs. I have attached the estimation letter from the hopsital below. 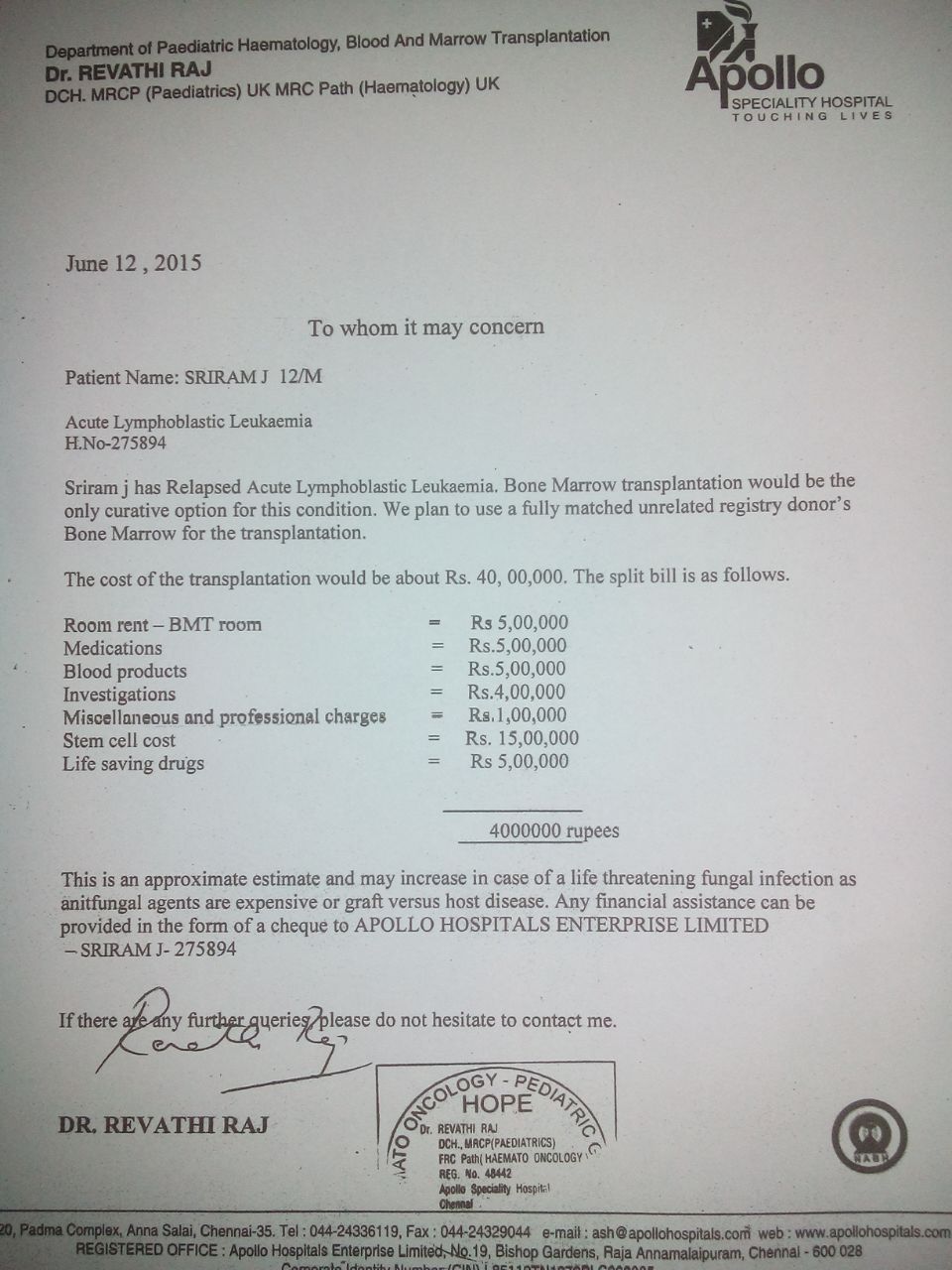 Kindly fund as much as you can to save our beloved son.Your contribution will be of great help to us. For any queries you can mail me at jaikumar20142014@gmail.com, ph 9952001061