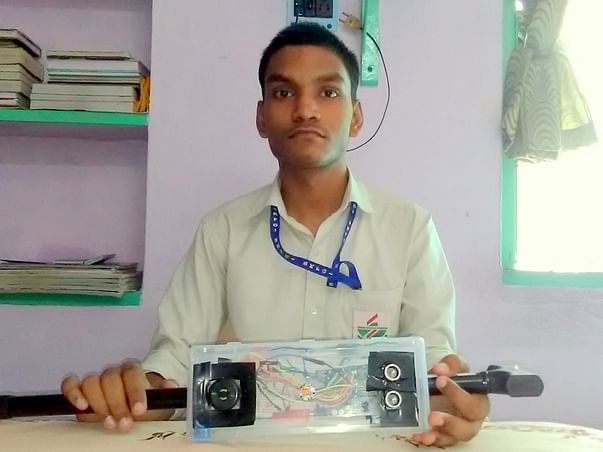 Share
Avinash Shaw’s days are not comparable to the other students around anymore. All had been going as planned till uncertainty and economic challenges grabbed him unexpectedly. An acute cerebral infarction seized his father from his life on 3rd April morning. This left no option for him but to dropout from pursuing his B.Tech.

In spite of this catastrophe Avinash remained focussed to his goal of assisting people with disabilities from economically weaker section of the society. He completed his project, an affordable smart walking stick for blinds. He is working hard on fine tuning the electronic device for suitability of commercial production. Made at a cost of Rs. 800/- only, this stick will make life of a visually impaired easier.

At the early age in high school, Avinash conceived the dream of becoming a scientist of ISRO or DRDO. On scoring 84.2% in higher secondary (this performance is considered excellent considering the West Bengal board’s conservative marking system), the next step towards his passion was pursuing Electrical Engineering. His father, the sole earning member of the family, used to have a monthly salary of Rs. 14,000/- only as a machine operator in a unit of Hastings Jute Mill. He borrowed to get the best possible education for Avinash. Though reluctant of burdening the family, Avinash finally gave way to his father’s insistence to get admission to Supreme Knowledge Foundation Group of Institutions.

With help from his teachers of Rishra High School he succeeded getting a scholarship of 50% of tuition fees from second semester. However, the rest half is also out of his dreams to afford. He needs to pay the college Rs. 23000/- before 26th July 2017. Let us come forward to aid him financially. A contribution of Rs. 500/- or multiple of that is appreciated.