Help this father save his 4-month-old baby! | Milaap
This is a supporting campaign. Contributions made to this campaign will go towards the main campaign.
This campaign has stopped and can no longer accept donations.

Help this father save his 4-month-old baby! 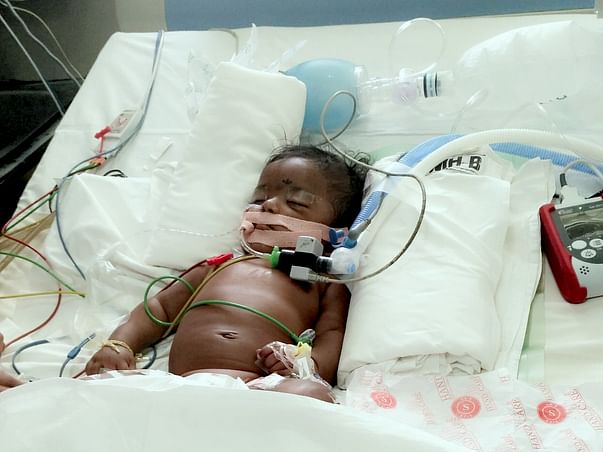 Baby Deeshit is 4-months old and is battling a serious infection. He has been in paediatric intensive care unit (PICU) for a week. His parents need financial help finishing his treatment to save Deeshit.

For Chandrashekar, the new year started with his 4-month-old baby – Deeshit falling sick with a high fever. His wife Lakshmi, their 4-year-old daughter Vaishali and Deeshit were in Hosur, at their grandmother's house. Deeshit was vomiting by the next day, his tiny body shuddering and seizing up.
Baby Deeshit in intensive care
“We thought the baby was having fits. We rushed him to his doctor, but he was not there. We didn't know what to do. That Monday was the worst day of my life,” he explains. Chandrashekar works in a real-estate agency and earns 12,000 per month. For that much money, life in Bangalore is beset by worries for money.
When they couldn'treach their regular doctor, Chandrashekar took Deeshit to a small hospital near his house. The doctors suspected pneumonia but an X-ray showed no phlegm. Realising they needed more expertise, the doctors rushed Deeshit in a ambulance to Manipal Hospital.
Chandrashekar and his wife Lakshmi next to Deeshit in Manipal
He was admitted in PICU under Dr. Shivakumar. He has been diagnosed to be suffering from Sepsis and is on medical management and Ventilator support. His doctor says he has a very good chance of recovery, provided he takes the full course of his medicines. Without the treatment, he cannot survive.
“Deeshit is vomiting, having seizures and has been away from home for a week. My wife is still recovering from the delivery and I don't know how much more she can suffer,” Chandrashekar says.

Even when he was in the womb, Vaishali spoke to him and dreamt of having a little brother. Her parents, worried at the intensity, tried to tell her that a sister would be just as fun, but she insisted. Still at her grandmother's, she asks for the baby every day.
Baby Deeshit a few weeks after his birth
Before the baby was properly diagnosed, the doctors had told them that the treatment would cost them 2 lakhs. They sold off what little gold they had and borrowed money from friends to scrape together the amount. After a week in PICU, that money has already run out. Medicines alone cost them Rs 80,000.
To complete the treatment, Chandrashekar needs to pay 6 lakhs. It is a sum he cannot raise. His voice breaks as he is unable to even voice what can happen if he doesn't arrange for the sum, “He is only 4-months-old. Sometimes he is so tired, he doesn't move. That is when a new ripple of fear goes through me again. I have to save him but I don't have any savings left.”
Let money not be the reason this father loses his baby. Please donate to save baby Deeshit.
supporting document 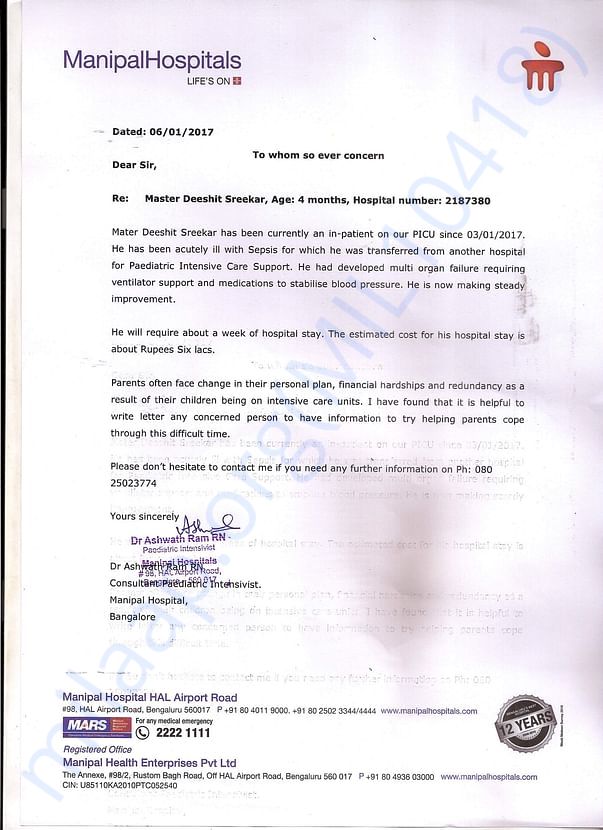 Ask for an update
Donated to this campaign via Paytm or bank transfer? Click here if you have not received an email confirmation from Milaap.
Dear Supporters,
Here is an update on Deeshit's health.

Deeshit was suffering from Sepsis and underwent treatment for the same two months back. He was discharged from the hospital a week after his treatment got over and there were no major side effects. He had a little temperature but was fine in 2 days.

When they had gone for a follow-up, the doctors said that water has been accumulated in his brain and an operation will help. As Deeshit is just a few months old, his parents decided against it and went for ayurvedic treatment instead.

He is recovering fast and is keeping well now.
"Initially he did not talk or respond to people but lately has been laughing and playing", said his father, happy and content that his son healthy and hearty.

Thank you all for the love and support. You are the real heroes.

Donated to this campaign via Paytm? Click here if you can’t find your donation listed below.
TK
Tejasvi donated Rs.500

Donated to this campaign via Paytm? Click here if you can’t find your donation listed below.
TK
Tejasvi donated Rs.500

You are sending a message to
Mahesh Kundrapu
Go back 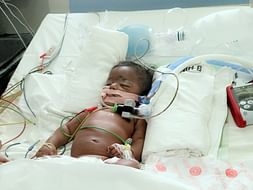 Help this father save his 4-month-old baby!