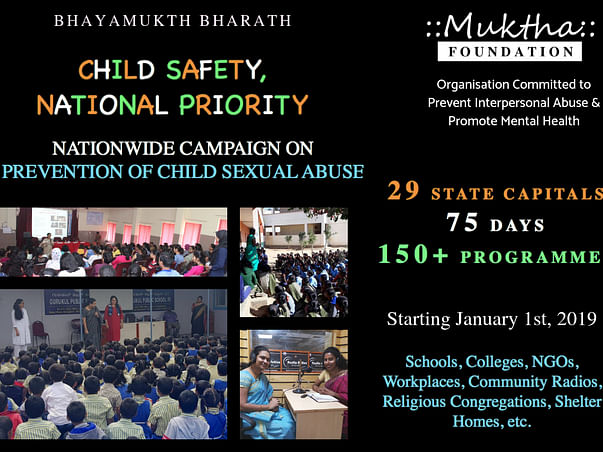 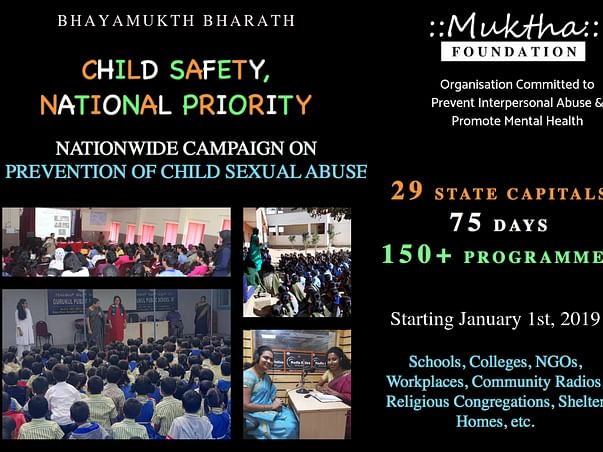 Share
The coming New Year is very significant to all of us at Muktha Foundation as we are launching a nationwide campaign on prevention of child sexual abuse starting from January 1st, 2019, in our continued efforts to make child safety a national priority.

A team of mental health professionals led by Ashwini N.V, Founder-Director of Muktha Foundation will be travelling to all 29 State Capitals and 3 Union Territories for 75 days non-stop to conduct over 150+ Programmes to train over 1 Lakh children and other stakeholders such as teachers,
parents, NGO Professionals, members of religious congregations, and community members on ways to
prevent child sexual abuse.

Having trained several thousands of children, and other stakeholders on prevention of child sexual abuse through hundreds of workshops, training programmes, community radio programmes over the past years, we at Muktha Foundation intend to intensify our efforts and strategically create ambassadors of child safety in all the 29 states and 3 union territories through this nationwide project titled 'Bhayamukth Bharath'. The objective is to train stakeholders who pledge to teach children on prevention of sexual abuse post our training sessions.

The vision is to ensure no child is abused and no child fears being abused, and hence the campaign is titled 'Bhayamukth Bharath'

We seek your financial support to be able to cover travel, accommodation, printing expenses as we travel to all the 29 state capitals and 3 union territories for 75 days to conduct over 150 + training programmes on prevention of child sexual abuse to over 1 lakh children and other stakeholders in the life of a child.

Further details regarding our organization, team, current project, and campaign are as follows:

We have conducted several hundreds of workshops on prevention of child sexual abuse in several states of our country. Some of our key achievements recently are being invited to St.Gallen Symposium, Switzerland in May, 2018 to share the work of Muktha Foundation amidst several world leaders, and being appreciated by Kailash Sathyarthi, Nodel Peace Prize Winner for our association with Young Indians of CII for our nationwide project called Masoom, an initiative to prevent child sexual abuse.

The Team involved in the current project

The project will be led by Ashwini N.V, Founder-Director, who has worked for over a decade in the domain of abuse prevention and mental health promotion. The other team members who would be involved in the project are Sruthi Chaithanya, Annette Shaju, Nupura Byramudi. All three of us are mental health professionals with specializations/research and training interest in Counselling Psychology, Clinical Psychology and Mental Health Education respectively. We have expansive experience in the domain of prevention of child sexual abuse, and are passionately committed to the belief that children’s safety should be a national priority.

The Campaign: 'Bhayamukth Bharath ' with the motto 'Child Safety, a National Priority'

We have conceptualized this ambitious campaign, titled ‘Bhayamukth Bharath’, with the aim of empowering children and their stakeholders to prevent child sexual abuse. We will be traveling to the 29 STATE CAPITALS and 3 UNION TERRITORIES of our country in a span of 75 DAYS, starting January 1st to March 16st, 2019. In the places we go to, we will be initiating nuanced dialogue and conduct over 150+ TRAINING PROGRAMMES among all important stakeholders in the life of a child and children themselves on ‘Prevention of Child Sexual Abuse’. The places we will be conducting training programmes include orphanages, schools, colleges, universities, workplaces, religious congregations, shelter homes, community radio stations etc.

Our Aim and The Cause:  Prevention of Child Sexual Abuse

Child sexual abuse is a glaring reality that poses a threat to the safety of our children today. It not only affects the child in multiple ways, but has long lasting effects on the person throughout life. The trauma of abuse is grave and multilayered. Prevention of child sexual abuse’ programmes are often portrayed to be only about ‘Good Touch-Bad Touch’ and ‘Stranger Danger’. But the topic is more nuanced than most think it is. We aim at spreading awareness and initiating dialogue in the following nuanced areas pertaining to Child Sexual Abuse:


To help keep our children safe, it is important for children and all other stakeholders to be informed about these aspects in methods that best suit the age group.

The Journey to Be

We would be travelling to 29 capitals and 3 union territories in four blocks, one after another.Your Contribution is most sought

Our vision and commitment towards prevention of child sexual abuse exceed our self funding capacity. For this nationwide campaign, any contribution from your end will be valued greatly. You can microfund us with Rs.100/-, Rs.500/-, Rs.1000/- or any amount your heart intends to.

We shall send in a detailed report of how the amount was spent to every donor.We thank you in advance for helping us attempting to make the world a bit more safer for children. Let's resolve to make child safety a national priority.
Do learn more about our work from www.facebook.com/mukthafoundation

Donate
64 supporters
32%
Raised
Rs.2,58,360
of Rs.8,00,000
Only INR donations accepted towards this cause
Card, Netbanking, Cheque pickups
Or Donate using