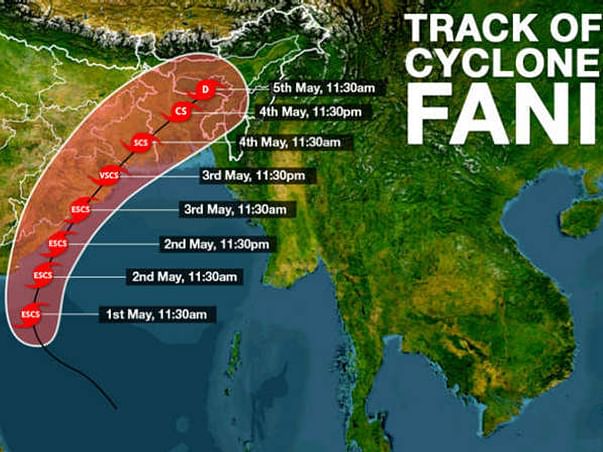 To facilitate the rescue and relief activities, the model code of conduct has already been lifted in several Odisha districts. Cyclone Fani, which will make a landfall in Odisha on Friday evening, is the strongest cyclone to be formed in the month of April in India in 43 years. A yellow alert has been sounded in Odisha after it intensified into "extremely severe cyclonic storm" late on Tuesday night.

Odisha is likely to bear the maximum impact of Cyclone Fani.

As per latest forecast by Joint Typhoon Warning Center (JTWC) at 8.00 PM, Cyclone Fani would cross near Udayagiri of Krushnaprasad block of Puri district of Odisha on May 3 afternoon at a wind speed of about 185 kmph to 215 kmph; to pass through Khurda, Cuttack, Dhenkanal, Jajpur, Mayurbhanj districts, informed Special Relief Commissioner (SRC) sources.

Odisha government has ordered closure of all educational institutions across the State from May 2. All examinations scheduled to be held have been postponed till further notice.

May 4:
Red warning has been issued for districts of Jajpur, Bhadrak, Kendrapara,
Balasore, Keonjhar, Mayurbhanj with forecast of heavy to very heavy rainfall.

Till now, danger signal number 2 has been hoisted at all ports of the State.

Storm surge of about 1.5 m height above astronomical tide is very likely to inundate low lying areas of Ganjam, Khurda, Puri and Jagatsinghpur districts of Odisha at the time of landfall.

We are preparing
ourselves to support, rescue and help at least 1000 families of Puri,
Jagatsingpur & Khurda districts of Odisha where will affect saviour. In
such situation it is difficult to calculate the budget requirement to help cyclone affect area. The basic urgent need will be Medicine, Dry food, lighting articles, materials for temporary shelter, baby food, clothes, etc. So, we want to make such kit prepare earlier so that can be supported in proper time.

We appeal to donate towards our objective so that we can able to help as much during such dangerous situation.

We are preparing a kit for family. A family kit may cost more with all urgent articles. But We will pack only basic articles and need basis at ground level. A Family Kit cost will come Rs. 1000/- to Rs. 1500/-. Any organisation or individual can help in kind also.