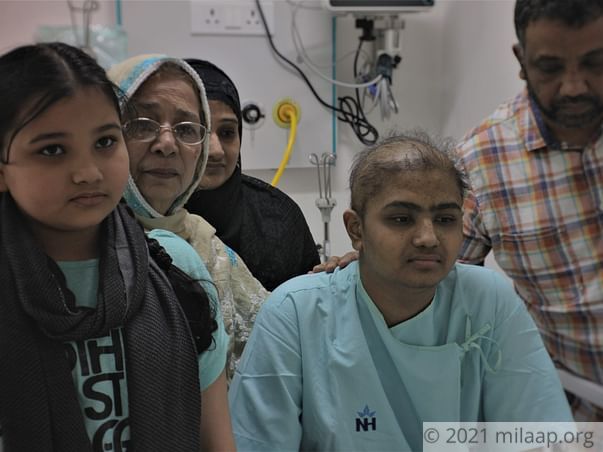 Share
It has been a while now since Rayyan has not been able to drink water and eat properly. And it is not because he does not feel hungry or thirsty; it is because when he takes even a small sip of water, his insides burn due to internal ulcers as that drop goes down his throat into his stomach. Rayyan is on high dose chemotherapy for relapsed blood cancer, and he is going through nothing short of hell. His eyes and mouth are always dry; the steroid injections he gets on a daily basis have made his whole body swell.

Rayyan has been in a bad mood for a while now due to the excruciating nature of his treatment, but Reshma always believed that he still had a strong fighting spirit like always until he told her last week, crying, ‘I don’t want to live anymore, Ammi. I’d rather die than see Abba and you run from pillar to post, trying to find money to save me. I cannot go through this pain anymore.’ Reshma hugged her son and said nothing. But she knew in her heart that she had to save him at any cost now – money is the only obstacle in her way.

Rayyan, before his condition worsened

‘The doctor told us he had only 4 months to live, but we told him we would fight for his life’

Rayyan was first diagnosed with cancer when he was just 7 years old. His father, Nawaz, who was working in the Gulf as an airport luggage handler for a decent salary, had to come back to India to take care of his family in those tough times. He had to sell the house that they had bought just a few years ago, to kick-start his treatment. 3 years of missed classes, dampened hopes, grueling chemotherapy and follow-up treatment later, Rayyan was declared cancer-free just 3 months ago.

“When the doctor said that Rayyan was cancer-free, I wanted to hug the doctor,” says Nawaz, with tears in his eyes. “My poor boy was so happy that he could finally go back to school and give his 10th boards. He had always been up-to-date with his lessons, attending tuition at home and discussing portions with his friends over the phone. We thought his bad days were finally over until a routine test few days ago revealed that his cancer was back.”

Nawaz and Reshma were told that their son had only 4 months to live. But the parents kept pleading with the doctor for some way to save their son – “That’s when he told us that a bone marrow transplant was the only way to cure him completely, but the costs are completely out of our reach. We said we will do everything we can to make it happen, however difficult it is."

Reshma and Nawaz can save their loving son with your help

“Rayyan was the life of this house. Be it any function, any family get-together, he would always make everyone laugh by imitating actors. He used to care for his 73-year-old Nani (maternal grandmother) more than anybody in this house. Now that he is in the hospital, the house has become gloomy. We are waiting for him to come back and liven up this place. Only he can make this house a home,”- Reshma

Rayyan, at his birthday celebrations, shortly after he was declared cancer-free the first time

Nawaz works as an office boy in their hometown of Thane for as less as Rs 10,000. Reshma and him have dedicated their lives to save their son. They have sold everything – their house and whatever jewellery they had to pay for his treatment till now. Rayyan is critical and only a bone marrow transplant can save him now, but his parents are absolutely helpless.

Your kind contribution can ensure that they save their son