Help Prabjot Fight For Life And Overcome Her Brain Injury | Milaap
This is a supporting campaign. Contributions made to this campaign will go towards the main campaign. 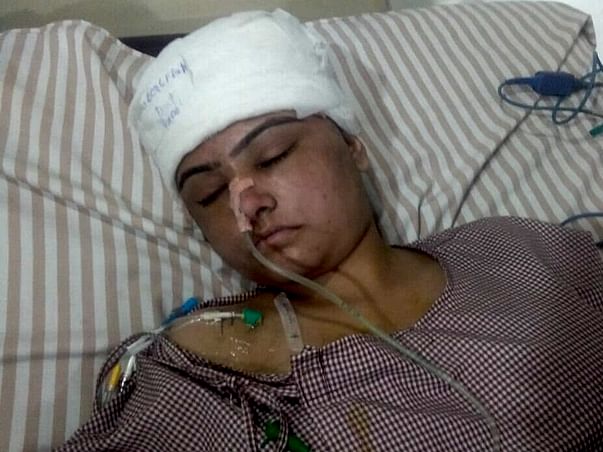 Dear all,
I am Mahipal Dan Charan, I am raising fund for my classmate, Prabjot Kaur.
What happened?
Prabjot Kaur, the student, Sardar Patel University of Police, Security and Criminal Justice, Jodhpur, has met with an accident on 3rd Jan 2018. This accident was the result of low visibility and rash driving by a Bolero driver who hit their Scooty from the back.
As a result of accident -
She has suffered severe brain injury and she is unable to speak and is in the unconscious state. As per doctors, multiple operations are to be performed to cure her. Two operations were performed on 6th Jan. Still, there are few clots reaming in her brain, few more operations will be performed later.
She is admitted to -
Sobti Neuro and super hospital, 973, KVM school road Civil Lines, Ludhiana, Punjab 141001.
Sobti Hospital contact number -
Patient name - Prabjot Kaur, Father name - Bhinderjit Singh.
Who is Prabjot Kaur?
Prabjot Kaur is a meritorious student. She is very helpful in nature along with being polite. She is one of the best speaker, University of Police has ever known. She has recently won ‘Quit India quiz’ organized by Narendra Modi official app (Narendramodi.in) as on 14th August 2017 and received a book along with a letter personally signed by Prime minister of India. She has also been selected as best speaker of National youth parliament held at the university campus and was about to appear at the state level.
Why am I raising funds?
At present, the Financial condition of her family is not well. Her proud father, after getting over a disease, is the breadwinner of her family. He does so with some daily wage short of activity. He is the real hero of the society because, in spite of that meager Income, both Prabjot and her brother are receiving Higher education at prestigious universities. She belongs to a BPL family.
As per Doctors, total expense will reach around 12 lakh mark. Her family is currently unable to raise this staggering amount.
What did we do?
We all students contribute to raising her semester fees every six months.
We, the members of Police university have cooperated well and have raised funds. As expenses are bit higher and we have reached our saturation level to help her financially; we need your help in order to help her fight and keep up her survival.
The whole of SPUP family stands united and all are looking positively to leave no stone unturned in the quest to save Prabjot.
What If we are unable to raise fund?
As I said, we have reached saturation point to raise funds, We have resorted to crowdfunding. Inability to raise funds at this point can result disastrously. As her father has already invested all the saving to save her and even resorted to other possible means to raise funds and subsequently have reached the saturation point, It will be extremely hard for her family to raise more fund with immediate effect.
So, believing in the brighter side of humanity, we request you to help her financially. Kindly help a bright student not lose her fight for survival just because of lack of financial resources.
We request you to contribute in the same.
Anyone willing to contribute is requested to contact -
Mahipal Dan, student, Sardar Patel University of Police, security and criminal justice, Jodhpur. (7425024817)
Shubham, student, Sardar Patel University of Police, security and criminal justice, Jodhpur. (9461404220)
Kushal, the student the Sardar Patel University of Police, security and criminal justice, Jodhpur. (7891474375)
Tarsem Singh (Ravi), brother of Prabjot Kaur (9877621157)
Bhinderjit Singh, father of Prabjot Kaur (7814575791)
We request everyone to contribute as per their capacity and as soon as possible keeping in mind the gravity and severity of the situation.
Thanks. 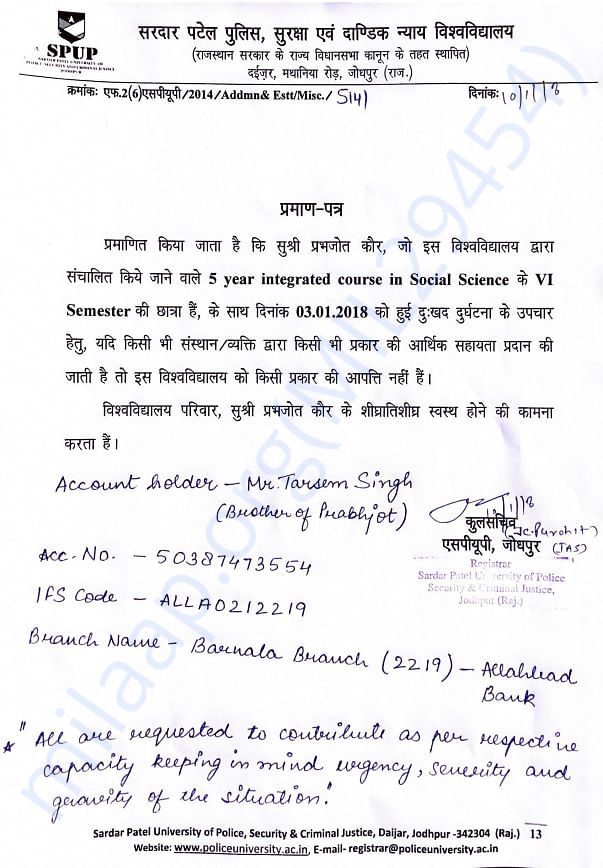 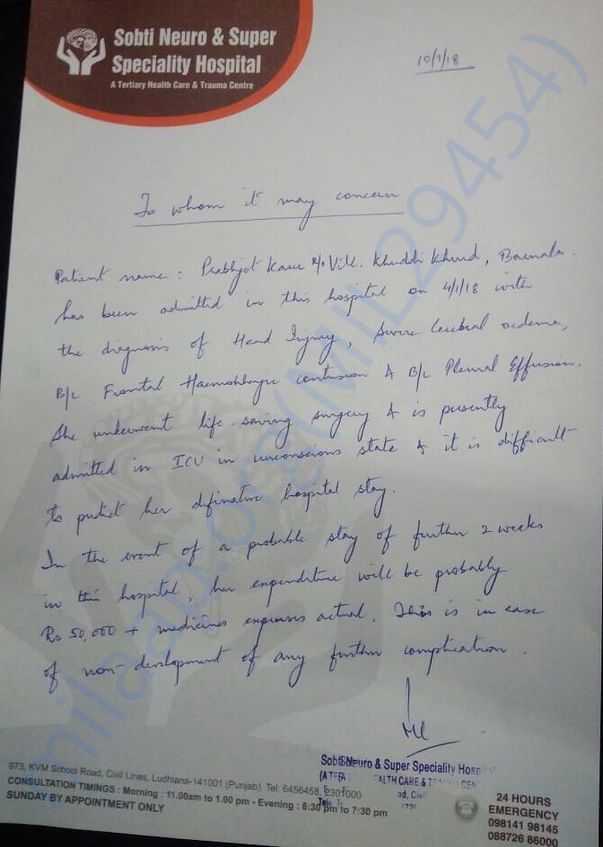 Thank you all for the support!
She is currently enrolled in a university, completing her masters. Yet her health is very fragile. Weakness, giddiness, Headache, severe pain etc are more frequent, these all causes concentration laps. even doctors has advised her to not to spend more time studying books or peeping on computer screen. It will take longer time for her to recover to a significant level. She gets medical treatment frequently.
All operations have been performed. She is currently at home and visits doctor regularly.
Hi all,

Here is a quick update on Prabjot.
Doctors have performed second operation and she is in hospital. It will take a week or two to recover to a significant level.
Load more
Donate

You are sending a message to
Sourav Mitra
Go back 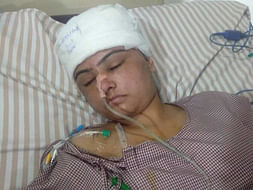