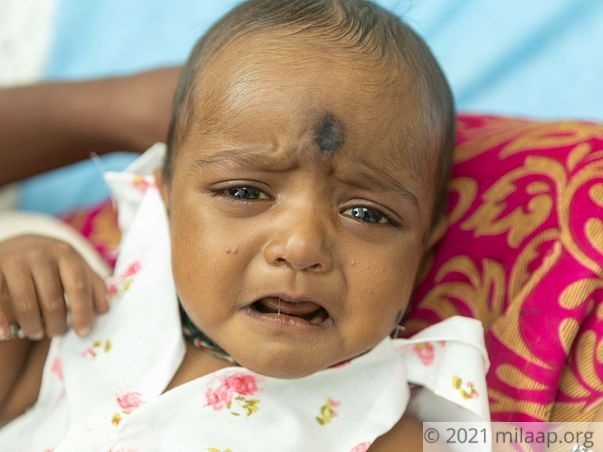 Gopal and Rukmini were the happiest when baby Amarendar came into their life. He looked healthy and showed no signs of health problems as a newborn. But just a few weeks after his birth, his health started deteriorating. His parents never imagined that their little one would be diagnosed with a severe liver disease. Now, his condition is worsening with each passing day and only a liver transplant can keep him alive.

“It’s been forever since my son slept peacefully. He cries all day and night because of his painfully swollen stomach, and it’s only getting worse now. I want to hold him and free him from this misery, but I’m scared that even a slight touch of mine will cause him pain. I hold him for a few minutes, hoping he will calm down, but his cries only get louder. It breaks my heart that I can’t do anything for him. The doctors say that he will survive only with a liver transplant but we have nothing to afford it. All I can do is helplessly watch him go through this struggle.” – Rukmini, mother

Gopal and Rukmini reside in Marpalle, Telangana with their elder son Shashidhar (3) and younger son Amarendar. They were scared when little Amarendar’s eyes and skin started turning yellow. They immediately took him to the hospital and he was diagnosed with jaundice. Amarendar was given medicines to recover, but he wasn’t getting any better. His parents were told that Amarendar needs to undergo Kasai procedure, a surgical procedure which is done when the bile-producing ducts in the liver are blocked and hence the ducts are surgically bypassed to prevent liver damage.

“I thought that my son would get better after the surgery. But he wasn’t getting better. His skin and eyes still had the yellow cast of jaundice and the swelling in his stomach was constantly increasing.” - Rukmini, mother

Only a liver transplant can save Amarendar from his worsening condition

Fearing that they might lose their child, Amarendar’s parents took him to a multispeciality hospital in Hyderabad, Telangana. Amarendar is diagnosed with biliary atresia, a rare liver disease because of which the bile that flows from the liver to the intestines, is trapped inside the liver, quickly causing liver damage and eventually leading to liver failure if not treated. An urgent liver transplant is the only way for Amarendar to recover but lack of funds stands in their way.

“It’s been three days since my son has eaten anything or had a sip of water. Even if I feed him milk, he passes it out instantly through motion. He’s becoming so weak that he can hardly open his eyes. He cannot even breathe properly and constantly whimpers in pain. He’s too little to go through this pain.” - Rukmini, mother

After selling everything that he had for his son’s treatment, Gopal cannot afford the transplant

Gopal and Rukmini grow crops on others' farms to look after their family. Together they earn Rs. 3000 per month to meet their household needs. To save their younger son from liver failure, Gopal sold his two oxen and used the little savings he had. But now after exhausting all the money for his son’s treatment, Gopal is struggling to afford the life-saving transplant that costs 18 lakhs.

Little Amarendra is going through unbearable pain each day. Every day that he goes without the transplant is only adding to his suffering. He needs to undergo a liver transplant immediately but his poor parents cannot afford it. Only your help can save this little one from dreadful liver disease.