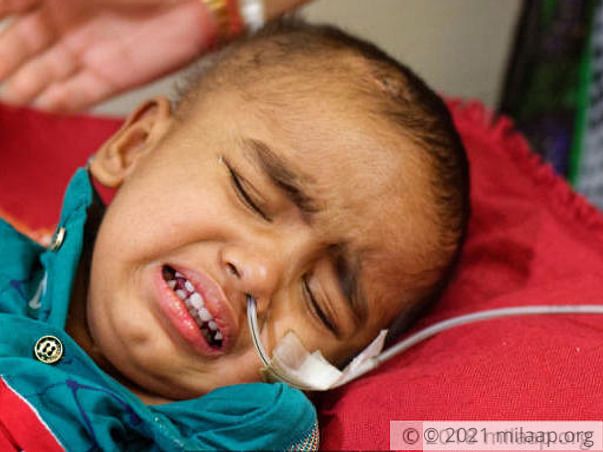 “While other children of my daughter’s age are going to playschool, my 2-year-old daughter, Dipasree is in the hospital, painfully fighting for her life. When I had held my daughter for the first time, I had pledged to protect her against everything bad. But now I feel completely helpless. A cancerous tumor has spread from her brain to her spinal cord and is getting dangerous with every passing day.” - Piyush, Dipasree’s father.

Piyush doesn’t remember when was the last time he saw his wife and daughter smile. Before he could enjoy his daughter's laughter properly, his ears were filled with Dipasree's painful cries. It’s been a year and a half since his daughter is battling cancer. Piyush and Madhumita never imagined that they will have to see their only daughter lying in the hospital bed and suffering for months. Dipasree has just learned to speak and she tries to ask her parents to take her out of the hospital.  Piyush and Madhumita try to pacify her by distracting her with toys, but nothing is helping lessen the poor child's anguish.

After wrongly being treated for gastric problems, doctors found that she was throwing up due to a deadly brain tumor

In 2017, little Dipasree kept vomiting for days. Her parents took her to the doctors who thought that the little girl has a severe stomach disorder. They went to several doctors all of whom kept treating her for the stomach disorder. After knocking the doors of several hospitals, in her MRI, the doctors finally found that she had a brain tumor which was causing her problems.

Little Dipasree has medulloblastoma, a cancerous tumor in the central nervous system. The 2-year-old has already undergone 2 surgeries to get it removed, but it has now spread to her spinal cord which is extremely dangerous. She needs to undergo chemotherapy and radiation to live. She also developed crossed eyes due to this deadly tumor.
An old pic of Dipasree

After his relatives have turned away from him, Piyush has no means left for his daughter's treatment

Piyush has already spent almost Rs 5 lakhs so far. Initially, he had borrowed from his friends and relatives. But his relatives no longer want to help him. They don't even stay in touch. He feels his helplessness, turned his relatives away from him. But with no income for a year, he had no other choice. He was also helping Madhumita complete her graduation after getting married. Her parents were unable to afford her education. They were hoping that she could get a job and support the family. But before she could appear for her final exams, their daughter was fighting cancer. Piyush and Madhumita are at the mercy of others' for food and shelter. Now arranging another Rs 10 lakhs is beyond his means.


"I took private tuitions for students in Birbhum, my hometown. I took extra classes to fulfill my family's needs. With whatever minimum income I had I somehow managed the expenses. But now I have no source of income for the past 1 year. I have exhausted all my sources to arrange money. But nothing is enough. I don’t know what will help us take our baby back home.”

2-year-old Dipasree is suffering from deadly cancer that has spread to her spinal cord. Her father hasn’t been able to work for the past 1 year and has no income. He has been struggling very hard to save his daughter but has no means left. He needs help.