4-Year-Old Needs Help To Fight Deadly Blood Cancer | Milaap
This is a supporting campaign. Contributions made to this campaign will go towards the main campaign.
Milaap will not charge any fee on your donation to this campaign. 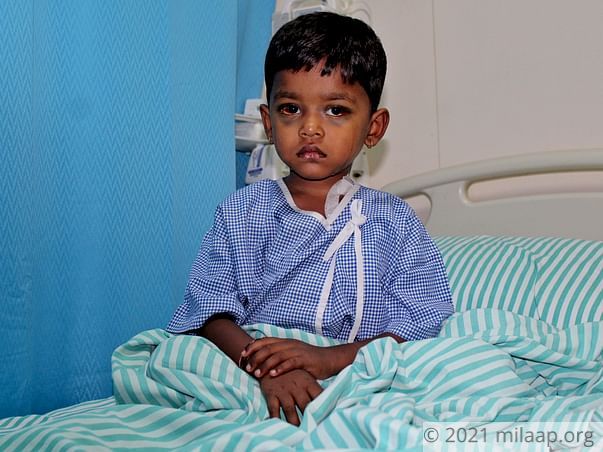 ‘Why is there blood in my eyes, amma? Am I going to die?’, asks a scared Diganth when he sees his own reflection in the mirror. His mother Shobha holds her tears back and consoles her little one saying, ‘It’s because of the fever you have. It will go away if you eat more vegetables and fruits.’ And that was the last time, little Diganth saw himself in the mirror. Now, he just lies in his bed, scared and sad, tearfully begging his mother to take him home. But Shobha can’t, because little Diganth needs a bone marrow transplant to fight blood cancer.

It all started as fever that only worsened Diganth’s health

With his birthday just a month away, Srinivasamurthy and Shobha were busy making plans for Diganth’s birthday celebrations in their tiny home in a village near Kolar, Karnataka. But Diganth started having fever and he was given medicines to recover. But when his fever didn’t subside, his parents’ thought something wasn’t right and they took him to Bangalore, Karnataka for better consultation. After some tests, Diganth was diagnosed with Acute lymphoblastic leukemia, a severe form of cancer that affects the white blood cells and is progresses rapidly if not treated on time.


“It was one of the most hardest time of my life to watch my son undergo chemotherapy. He was in pain, but he was getting better. And after 6 months of the painful treatment he underwent, we thought he was free of cancer.” - Shobha, mother.

Diganth could finally go back home and get back to his normal life after 8 months of grueling chemotherapy and medications. He even started going to school and loved to spend time with his elder brother Dixit (7). But 5 months later, Diganth’s health started worsening and his worried parents took him to the hospital. Poor parents were utterly devastated when they were told that Diganth’s cancer is back and it is even more aggressive than before. “We thought his fight with cancer was finally over. But it isn’t. Cancer has taken the joy out of my son’s life,” says Shobha as she tries to hold her tears.

Little Diganth has lost the smile on his face, ever since his cancer relapsed. His eyes have turned extremely red and he has black patches under his eyes because of his extremely low platelet count. Each day, he’s just growing weaker and every day cries in pain, unaware that cancer has come back to his life. Only a bone marrow transplant can help Diganth fight cancer for once again.

His father is struggling every day to arrange money

Srinivasamurthy earns a meager income of Rs 9000 per month as a gardener in a factory and he can’t afford a transplant that costs 40 lakhs. Srinivasamurthy had to sell his wife’s jeweler and even borrowed money from others to help his son fight cancer for the first time. But now, with huge debts to be paid and having no one to seek help from, he is desperately struggling to arrange money for his son’s transplant.


He needs your help to fight back cancer

Diganth has been through a lot for his age. All this little one wants is to go back home and play with his elder brother. But he can only do it after undergoing a life-saving transplant. Diganth could fight cancer for the first time but now lack of funds stand in his way to fight cancer for one last time. Diganth needs your help to fight cancer. 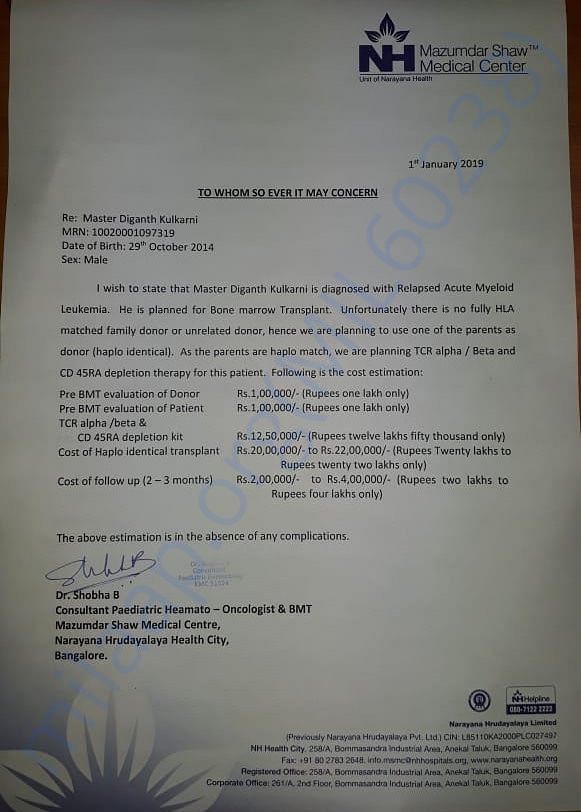 Thank you for all your love and support.
Diganth is so much better now. He is back to his active self and is doing well. We are taking him for his regular check-ups and everything looks good.

Diganth... You would be able to go out and play with your sister and brother very soon

Diganth... You would be able to go out and play with your sister and brother very soon 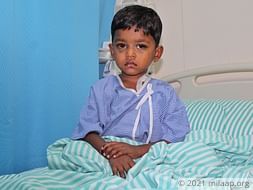