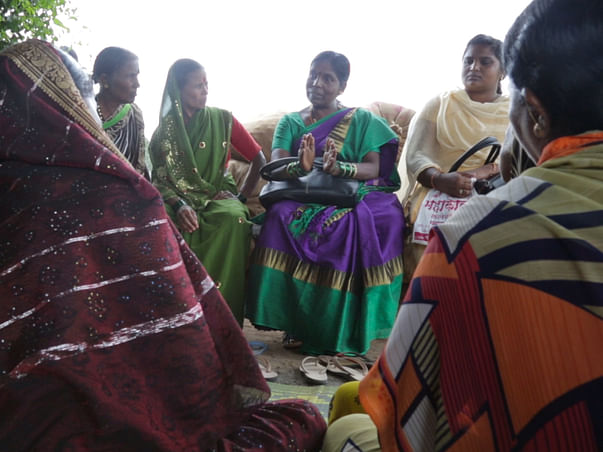 Behind every big change there is a story. Complete eradication of Devadasi System didn't happen overnight. It took many years , dedication and efforts of many.
One woman who drove this and changed lives of many, Ms. Sitavva Jodatti. Her hard work made it all possible. A former devadasi and now CEO of MASS (Mahila Abhivrudhi Mattu Samrakshana Samsthe) based in Ghataprabha, Belgaum district. Sitavva, a Padmashree awardee for 2018 always strived for the betterment of the Devadasis and Dalit women.
Ms Sitavva was forced to become a devadasi when she was a tender seven year old. She faced untold harassment and difficulties in her life. Her experiences gave her the courage to do something that would change her life, and that of other women. In 1997, she started MASS, to empower Devadasis and provide them with support. The organisation has grown since then and has taken up various projects to help former devadasis, Dalit women, and their families. There are now over 3600 devadasi women who are members of the organization.
She received a Padma Shri in 2018 for her efforts.
Even though the Devadasi system in India was completely outlawed in 1988, their lowly status remains and their struggle to earn livelihood continues.
Fighting for her communities rights with the government and with the help of micro lending organisations, Sittava has been able to procure meagre funds to give as loans to the devadasis. She firmly believes by supporting the Devadasis to start their own small businesses can help them lead an independent life with dignity.
She wishes to provide education to children of ex-devadasis and Dalit women. Educating their next generation can bring out a change in their families. As Malala Yousafzai says "Let us remember: One book, one pen, one child, and one teacher can change the world. "
"They should not fall victim to child marriage, they should not become child labourers" - Sitavva.
Sitavva has already changed the lives of over 3500 Devadasis, She now wants to work on rehabilitating over more 1500 devadasis and educate their children. Help her in this endeavour!
Read Ms Sitavva's interview with TOI : https://timesofindia.indiatimes.com/city/mysuru/padma-awardee-sitavva-mysuru-resident-find-mention-in-pm-modis-mann-ki-baat/articleshow/62688367.cms
Read More about Sitavva and her journey :
http://www.deccanchronicle.com/lifestyle/viral-and-trending/270118/urban-legend-conquering-a-cult-seetavva-shows-it-can-be-done.html