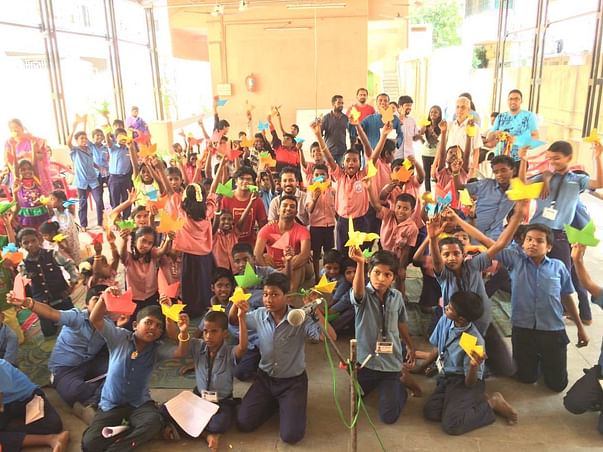 About Deepam
Deepam is a registered NGO founded in 2008.
At Deepam, we aim to light the spark in the child’s mind by focusing on 4 pillars - English Skills, Computers & Internet, Personality Development and General Awareness.
Over 200+ less-privileged children are taught every week and 1500+ students have graduated from the program since 2008.
Deepam has over 60 active volunteers who teach across 5 centers in Chennai.
Deepam plans to start 3 more centers in 2017-18.
Deepam was awarded the 2010 EdTech award by HP for innovative use of computers in teaching less-privileged children, one of the only 10 NGOs around the world, to receive this award.
Our Story
Educational freedom means, that students can make significant choices from a variety of alternatives.
But if the choices are always made from a list invented by someone and limited by circumstances, the freedom is of a very limited sort.
With computers, children will now have the Herculean power and a different kind of choice where they can meet their own needs using the computer as a tool.
The human thirst for excellence, knowledge, every step up the ladder of science, every adventurous reach into space, all of our combined modern technologies and imagination couldn't have been realized without computers.
Computers will help them create their own possibilities and gives them a direction rather than a destination.
These young children are full of dreams and have the potential to reach out to unlimited possibilities, but if they don’t get the opportunity now they will grow old and obey rules that aren't theirs.
Let's help them break the wall, so they can set themselves free.
When the dawn breaks let them have this infinite choice and freedom through computers.
The funds collected will be used by Deepam for setting up Computer Labs and Libraries across all the schools for children to use and learn as we were gravely impacted during the floods wherein we lost most of our laptops.
We will require the funds by end of September 2017.
Thanks for all your support!
Webpage: www.deepam.org.in
Facebook page: https://www.facebook.com/Deepam.ngo

Donate
0%
Be the first one to donate
Need Rs.750,000
Only INR donations accepted towards this cause
Card, Netbanking, Cheque pickups
Or Donate using