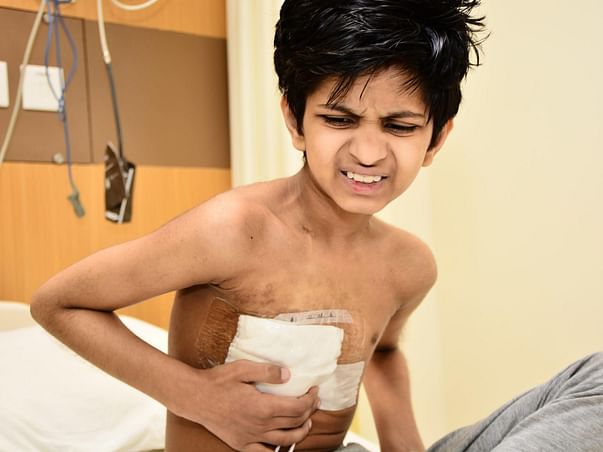 “ Danish cannot miss a single day of treatment, his condition deteriorates so much that we fear we might lose him. Sometimes we don’t have the money for it and think of postponing them, but one look at his face and we know this is not something we can delay. He is suffering everyday and his entire body aches. Doctors have told that only an urgent bone marrow transplant can save his life. We feel utterly helpless as we don't have the funds to go forward with the surgery, " - Sabina Bano, mother of 9-year-old Danish.

Little Danish is fighting blood cancer and has never seen a single day without pain for the last few months. Multiple infections have affected his body. The doctors have told that Danish’s only chance of survival is through a bone marrow transplant but his family is too poor to afford the surgery.

Danish is battling this dreadful disease for a long time now

Danish has been diagnosed with Acute Lymphoblastic Leukemia, a form of cancer that affects the white blood cells. It occurs in the bone marrow and can quickly spread to the blood. The cancer cells progresses very rapidly and creates immature blood cells.

“Four years back when Danish had a jaundice, we had no idea that this would turn into something so terrible. When he was not recovering even after several medications, the doctors decided to do a blood test that showed that my son has cancer. We were completely at a loss and did not know what to do to save him.” - Sabina.

Everyday the struggle becomes harder and harder for little Danish

Initially, the doctors thought that Danish’s cancer could be controlled by medicines but things soon turned into worse. In a matter of 3 days, Danish lost a lot of weight. This scared the parents who decided to take him to the hospital immediately. There they got to know that the only way he could be made better was through an urgent bone marrow transplant.

“Danish’s younger brother Shuhan was a perfect match for him and we decided to go forward with the bone marrow transplant. The cost of the surgery was too much but somehow we managed - borrowing from our relatives, friends, using up whatever little savings we had. He was getting better till the last month when we were shocked to hear that Danish has had a relapse.” - Jakir Mugal, father.

An old photograph of the family

Danish’s condition is worsening day by day. He has a severe pain in his bones and joints and more often than not he runs a temperature. He has lost his appetite and throws up anything that he eats.

“Danish knows everything about his illness, there is nothing that I could hide from him. He has been fighting for a long time. Despite the pain, he has stayed strong.  Now the doctors are saying that Danish needs a stronger round of chemotherapy followed by another bone marrow transplant,” - Sabina.

Jakir works in a factory and his salary is not enough to carry out the treatment of his son leave alone a bone marrow transplant. The family has already spent a lot for Danish’s treatment and the second transplant would require 40 lakhs. All this while he has been trying his best to make the two ends meet but now he is unable to do this any longer.

“It’s been so long I have seen him smile and  play around the house with Shuhan. I have been struggling so hard to make Danish’s life better but my financial condition has become a major constraint. I feel I have failed him as a father, I can’t face him. I often break down in front of him but he holds my hands and tells me that he would be fine. I hope against all odds that I will be able to arrange for the second transplant as well.” - Jakir.

9-year-old Danish is battling with blood cancer and only a bone marrow transplant can help him get better and lead a normal life. Jakir has been struggling for a long time to finance his son’s treatment and now he is unable to continue further. Only you can help these distraught parents to save their son’s life.