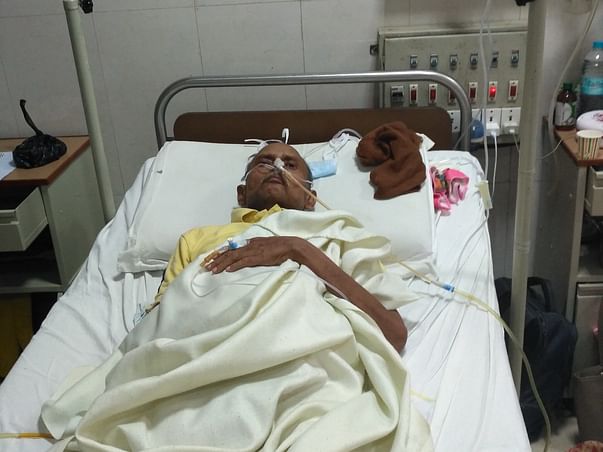 I write this fund raising request to you with extreme desperation in our heart for help. My father aged at 63 was suffering from two life threatening decease one was peritoneal cancer and second was cirrhosis.  If I share you background here, we come from a middle class family from Hamirpur town near to Kanpur was only dependent on our father, we are three siblings and he invested entire life for managing families financial need, because of this he never got a chance for money saving. After retirement and later 1 year we have notice that his appetite suddenly decreased and we thought it’s just a seasonal illness and contacted local doctor which has given some medicine but after 5-6 month he stopped eating anything hardly 5-6 bytes only and started feeling some stomach pain.
Then doctor suggested to do MRI, CT SCAN which we did and finding was a fluid has been filled in his stomach and it was a ascites. Kanpur doctor did some treatment but then they asked us to take him to specialized hospital for further checkups and treatment, since I am living at Noida and then visited hospital like Apollo Noida, Kailash Hospital Noida, and Fortis.
It did took almost a month to do various diagnosis done meeting with 6-7 different doctor for my father and hard saving money on those. Finally in Fortis, doctor said your father he has stage 4 cancer since they found malignant cell in fluid, it was really shocked to us and we can see his pain every time entire family was suffered so much mentally we all seems unconscious. Doctor suggested for an open surgery which was estimated 5-6 lac with only   20% hope. We could not believe that he was suffering from cancer as in his entire life he had not smoke or taken any drugs etc he was such social person lived his life support others, but when he needed support no one came forward. We again sent fluid in some other lab which we got negative report but the father health impacted day by day we could see the weakness.
After all those thing, we again came to Kanpur and did started diagnosis again which doctor said he has F4 fibrosis and admitted him for almost 2 week with per day cost at Rs.5000 to Rs.8000 till the time we had spent 6-7 lac already include medical, travel, hospitalization and diagnosis. After 2 week admission Kanpur doctor referred him to SGPGI Lucknow, where he struggled for almost 2 week with daily test, medicine, diagnosis etc and finally nothing had helped and he left his earthy journey on 2 October 2018 at SGPGI leaving us a uncovered huge grief and till the time we had spent almost 7-8 lac. What we need is a financial support from all you since we cannot go back in time to change everything, if you could support standing our family with your small donation which will at least help us covered those financial crisis.
If you could kindly support us in the time of our need, it would be of great help. I have attached copies of all the reports from the hospital.
We earnestly need your help. Thank you in advance for your consideration.