Help save a deaf and dumb Son Who has A fatal heart disease. | Milaap
This is a supporting campaign. Contributions made to this campaign will go towards the main campaign.
Milaap will not charge any fee on your donation to this campaign.

Help save a deaf and dumb Son Who has A fatal heart disease. 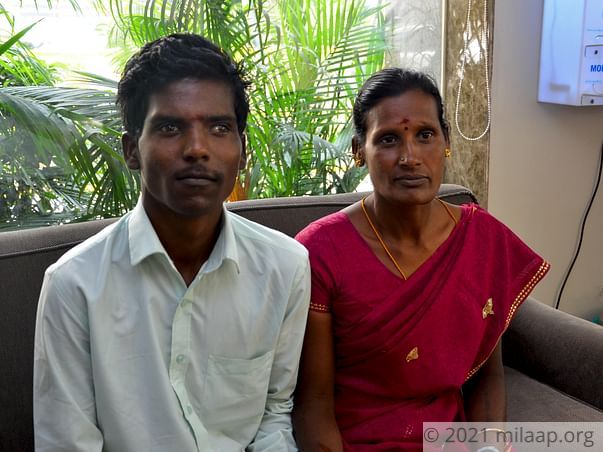 When my husband passed away Manikandan was just 1-year-old. Since then he became my world. I have literally no one in this world but him. He is 23 now, but still a child at heart. I wished to give him a healthy and happy life. I worked day and night to feed him. It wasn't easy, it felt like walking on a path full of thorns.

Like any mother, I also waited to hear him call me 'amma'. He turned three, five and even seven but he didn't speak at all. I also realized that he can't hear anything in his left ear. I was totally devastated. It took 20 years for him to utter his first words. He can now utter few words but can't speak a sentence.

My dreams of what future would look for him was completely shattered. I felt abandoned and isolated. I live in a village and the stigma of disability is very strong here. My son grew up all alone with no one to play and talk. I can't even afford to spend quality time with him. He doesn't speak like others but I'm a mother how can I fail to see the pain in his eyes? I know he is longing for a companion but I leave him all alone in the house. Only if I work day and night I can feed him 3 square meals.
I earn only Rs 150  a day, I sometimes borrow money to feed him. I have never even thought of taking him to a hospital. I feel guilty, I feel responsible for his condition. I don't know how he can still love and trust me despite letting him grow in isolation and depression.

Our life was a constant worry, exhausting and painful. I was worried about his future. In my village they say, only when something drastic happens we realize how blessed we were all these days. I would laugh thinking what worse could ever happen to us. But fate had its cruel intentions.

A few months ago, he felt a bit out of breath, from breathlessness to nausea to nothing at all. He suddenly collapsed.  For the first time, I rushed him to hospital. Doctors told me that he has a heart disease and he needs surgery. I couldn't believe it. Why him? Why he has to endure so much pain?

Both of us broke into tears, as usual, we were left with no one to console us. This time I lost all my strength. I can't see him suffering from breathlessness. He becomes tired soon. The only pleasure he had in life was to walk around the whole village.

As he never had any friends to talk and listen, he used to walk and he feels good with nature than with a group of people. Now, he is deprived of even the smallest joy of walking around.

He needs a surgery at the earliest to survive. All I wish is that he lives his life, no matter whether he can speak or hear. I want him to live, I can't imagine losing him. Now I'm relying on the strangers to save my son!
--
Chinnapapa has been living a life full of struggles, bringing up her disabled son all by herself. Now, when Manikandan's life is in danger, her Rs. 150/day wage is not enough to save him. Your contribution can help him get the urgent surgery he needs to survive. 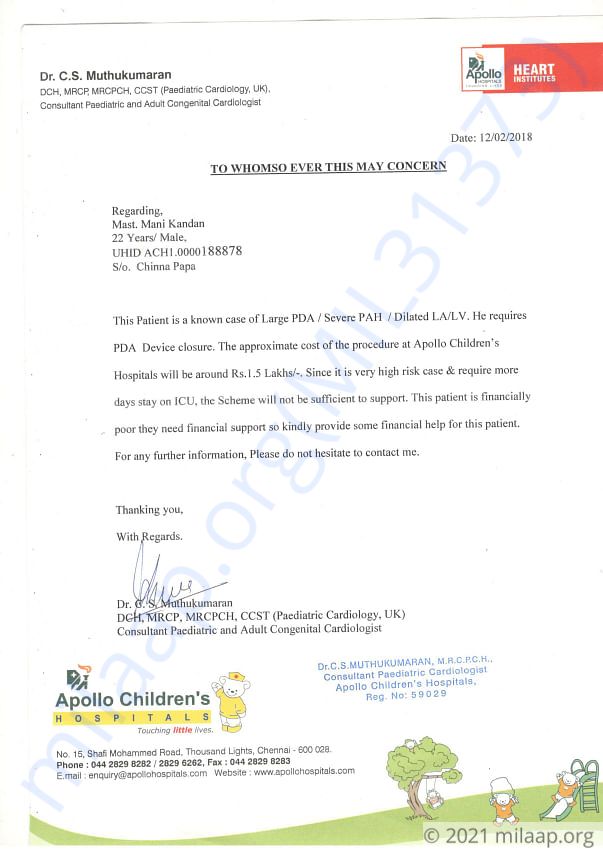 SR
You are sending a message to
Santosh Ramaswamy
Go back 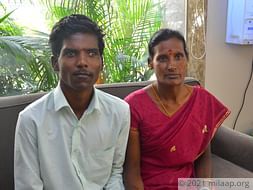 Help save a deaf and dumb Son Who has A fatal heart disease.