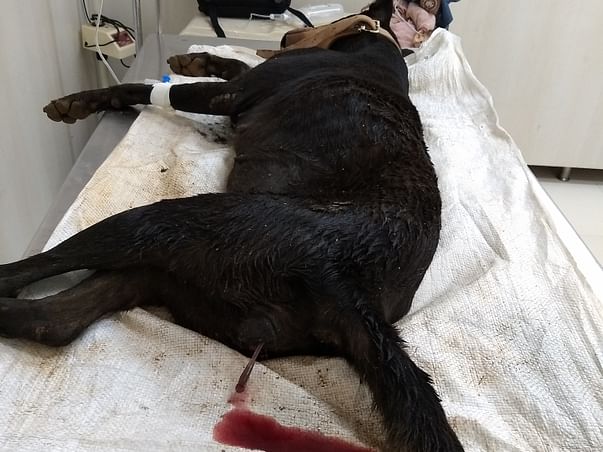 Blackie a female black indie dog was found lying on the road side of Anand Nagar in electronic city Bangalore and she was in a sinking stage. She was picked from location and was admitted to Cessna lifeline on kudlugate on 8th June 2018 ,Dr.Ajitesh from Cessna started treating her initial diagnosis stated that she had a bad bladder infection and survival was a question mark.she was given saline and other antibiotics tube was inserted through vagina to remove urine as she was unable to pass urine on her own.. urine mixed with blood was comming through the tube ,see photo. Over the days puss and blood got flushed out and urine started becoming clear.She was on drips for almost a week as she was not eating on 7th day she started eating little ,which increased in volume over the days , she started drinking lot of water .So only antibiotics were given through iv food and water was given to her .Still she couldn't urinate on her own so was on tube , flushing was done twice to thrice a day .on 23rd we've released her back to her environment temporarily to check how she's doing on her own environment .As of now results are very encouraging. To Pay her medical bills and continue her treatment we're requesting good souls to fund her with what ever amount possible .Cessna had been very supportive in treatment of rescued streeties.