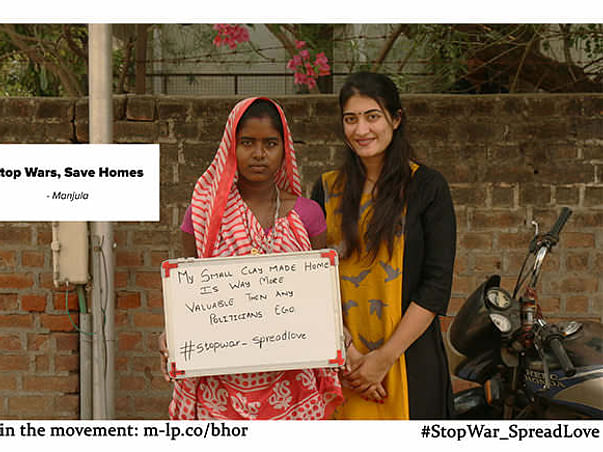 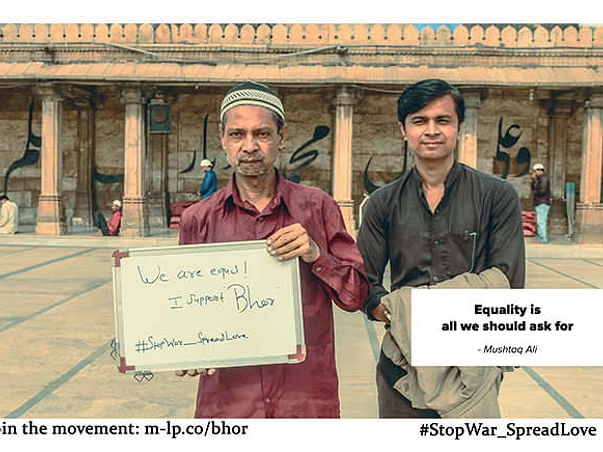 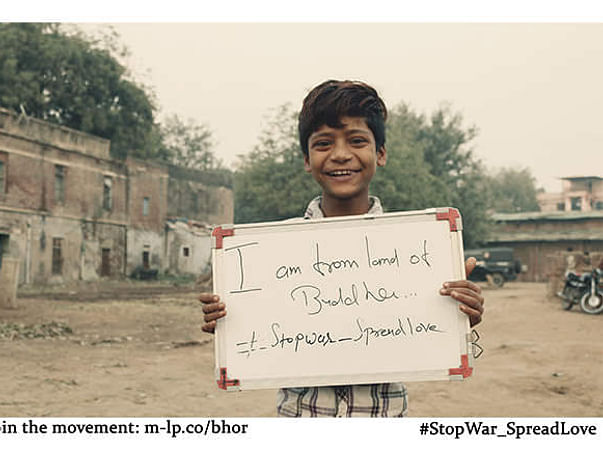 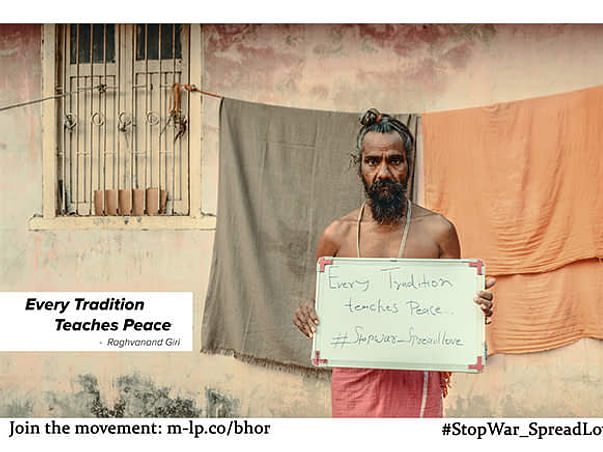 Share
Hello friends,
This is Dave Jigar. We are making a film named "Bhor - Awake within"
The film is based on our very own tradition "Prabhatferi" and It's impact on our practical life. An Impact which, off course with butterfly effect, can prevent even world war.
We are falling short for a small amount of budget (5 Lakhs only) and we were thinking to find a co-producer for that. but then we all decided something which mattered more for all of us.
We are going for Crowd Funding!
We want people to join our hands in this. It's not about amount of money you will give (any damn small amount. say 10Rs). It's about the synergy we are making with this. It's about how many people are coming together for this and what they believe in. It's about connecting people globally for a cause, for a better tomorrow, for a world without war.
We are putting our belief in practice. We are hoping that you all will join our hands by contributing your small bit in our movement #Stopwar_SpreadLove
What will you get?
- Every contributor's name for donating any amount will appear in the credit list of the film
- Along with above, Every Contributor donating amount more than Rs 10,000/- will get exclusive merchandise of Bhor.
- Along with above, Every contributor donating amount more than Rs 50,000/- will get exclusive Red Carpet Invitation for events of Music Launch and Premier of the Film and special mention in the Beginning Credits of the Film.
- Along with above, Every Contributor donating amount more than Rs 1,00,000/- will be given exclusive credit of "Official Philanthropy Partners" in the beginning credit of the Film.
The Budget part (Campaign amount out of Total budget of the film) which we are asking for will be used for
- Set Making
- Transportation
- Accommodation
- Food
- Additional Camera Equipments
- Additional Expenses
We have added pie chart of budget in documents below for reference.
Know us below

Dave Jigar: Director/Producer/Editor
With over 12 credits as Director, 7 credits as Editor, 6 credits as Composer, 4 credits as Writer, 4 credits as Cinematographer, around 21 films as Lyricist and over 27 brands for commercial ads, branding works under label of #freelancing_creativity, Dave Jigar is one of the critically acknowledged names in Gujarati film industry. You can check the credit list on IMDB link given below.
He is critically acclaimed for his content full work in his directorial features “Maanas” & “Matsar” by notable names of industry. A perfect choice with such experience and vision for becoming captain of the ship for the project “Bhor” is surely none-other but him.
IMDB:http://www.imdb.com/name/nm6333480/
Facebook: https://www.facebook.com/DaveJigar
Rishi Jani: Cast - Madhav
An actor prepared at  Actor’s Prepare, Rishi Jani is a known name for his Work in “Tera Jahaan Nahi” – a short film that has been selected at “Cannes 2017” and another short “Beggar Can” critically acclaimed in various film fests. With a recent Gujarati film “Shubh aarambh” in his titles, he has a Gujarati Film “I wish” and a Hindi Film “Matsar” ready for release in year 2017.
With a good experience of on stage drama like Avengers – Defending the audience, Ballabhpur ki roopkatha, Yug purush – Swami Vivekanand and his capabilities of performing different characters, he is surely a perfect choice for role of Madhav in “Bhor”
IMDB: http://www.imdb.com/name/nm7979313/
Facebook: https://www.facebook.com/rishi.jani.98
Denisha Ghumra: Cast - Yasho
IMDB: http://www.imdb.com/name/nm9455357/
Facebook: https://www.facebook.com/profile.php?id=100004382655454

Sapna Anila Shah: Music Director
Sapna Anila Shah is one of the leading emerging names in Gujarati Music Industry. She has won 11 Guitar Competitions out of which 9 competitions in a row and has done hat-trick of being Gujarat Champion. She is first & only lady of Gujarat for developing own techniques of playing “Gaayaki ang” & “JOD-JHAALA” of Indian Classical Music on a western instrument Acoustic Guitar.
And mainly, her biggest invention/creation is a new Indian Classical Taal “Saptaj” which is formatted on 11 beats. The meter of 11 beats is very tough and there are very rare taals like Rudra taal & Mani taal which are different in structure from her creation.
She is Gujarat's First and only Lady solo Music Director and with her notable and impactful music and sound design for Gujarati Commercial Crime Thriller Film – “Devang” on her shoulders, She is currently working on two Gujarati Films besides Bhor. Surely Team Bhor is heavily strengthened by having her on board.
IMDB: http://www.imdb.com/name/nm8597693/
Facebook: https://www.facebook.com/sapna.shah.122
Jayraj Shah: Writer
With around 6 scripts already registered by his name, Jayraj shah, Editor of Jayhind Express, also entitles 3 films – “Wrong Number”, “Love Campaign” & “E” which are under production currently.
IMDB: http://www.imdb.com/name/nm9151625/
Facebook: https://www.facebook.com/authorjayraj

Vidit Upadhyay: Cinematographer
Vidit Upadhyay  has been associated with filmmaking for morethan 5 years. His shortfilm as DOP was selected to cannes international film festival, cannes, france. Also one of his documentary was screened in several big institutes like harward and Cambridge. and which also got standing ovation in united nations.
IMDB: http://www.imdb.com/name/nm8631856/
Facebook: https://www.facebook.com/viditupa

Daksh Pandya: Asst. Director
Daksh Pandya is known for his directorial Short films “Tera Jahaan Nahi” – which was selected for cannes international film festival, cannes, france and his “Beggar Can” acclaimed at various film fests. He has assisted in direction in many Gujarati feature Films also.
IMDB: http://www.imdb.com/name/nm8387661/
Facebook: https://www.facebook.com/james.wan4

For any further information regarding anything
kindly contact: +91 99259 00659
or mail to: 13citystreets@gmail.com