Deadly Cancer That Blinded 9-Month-Old In One Eye Will Take His Life | Milaap
This is a supporting campaign. Contributions made to this campaign will go towards the main campaign.
This campaign has stopped and can no longer accept donations. 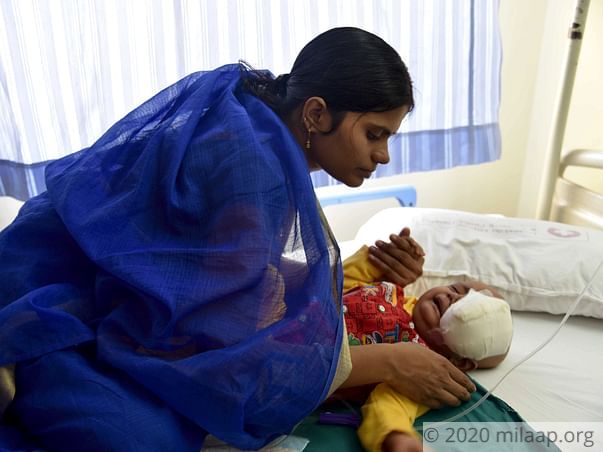 When Baby Shivam was born, the first thing his parents, Nibha and Naresh, noticed about him was his almond-shaped eyes, which only became brighter as months passed. After being told repeatedly about what a beautiful baby she had given birth to, Nibha always applied kajal on her baby’s eyes and a black spot on his forehead to protect him from the evil eye. But unfortunately, nothing she did could protect him from his fate; he has lost an eye due to a deadly form of cancer and is fighting for his life now. Naresh does not have the means to continue his son’s treatment and is struggling to save him.


“He gets a lot of injections to ease his pain daily, but even they do not help him sometimes. It is a horrible sight to see him tugging at his eye bandage and crying all day and night.” -Nibha, mother of 9-month-old Shivam Kumar.

Shivam is the first child of Naresh Kumar, who used to work as a helper and Nibha, a housewife. The family, though originally from Bihar, was settled in Haryana. When Shivam turned 5 months old in June this year, his parents decided to celebrate his Mundan ceremony (Hindu hair cutting ceremony) in their hometown in Bihar on 20 June. When the family boarded the train after the ceremony was over, they noticed inflammation in Shivam’s left eyelids – his eye had become red completely covered by the swelling. Naresh knew in his heart that this was the sign of something deadly and they got off the train immediately and rushed the baby to a hospital in Bihar itself. The doctors advised them to go to an eye speciality hospital in Tamil Nadu, where after weeks of tests, Baby Shivam was diagnosed with eye cancer.

“We had to move immediately to Tamil Nadu from Bihar in order to save our son’s life, without a paisa in my pocket. We had a lot of issues initially as we did not know the language nor had anybody to help us here. But I was determined to get my son the best care possible."-Naresh.

Shivam’s left eye is ravaged by cancer, but his life can be saved with treatment

Starting from August, Shivam has undergone 3 rounds of chemo now. Doctors did their best, but could not save his eye as cancer had completely taken over it. His condition is relatively stable than it was before, but he is not out of danger yet – he needs radiotherapy every 21 days, and more rounds of chemo till January next year to beat cancer for once and for all. His father, Naresh Kumar and Nibha know that treatment is the only way they can get his baby boy back from the clutches of this dreadful disease, but are helpless financially.

“Shivam is morose and irritable due to the amount of strong medicines that he gets daily. I rock him swiftly before and after a chemo session, but that does not calm him down. My heart breaks seeing him suffer like this, but I have hope that he will get better over time. I just wish that we are not forced to stop his hospitalization due to lack of money.”-Nibha

Naresh has been unemployed for months now, is forced to leave his family behind to arrange money

Naresh used to work as a helper in a steel company in Haryana for a meagre salary of Rs 8,500. But he had to quit his job abruptly when his son got sick and has been living with his family in Madurai for the past few months. He had to borrow heavily from his relatives and friends back in Bihar to kick-start Shivam’s treatment. Every time money got over, he used to call them up and ask for more. But now, nobody he knows is in a financial position to lend him more money. He has completely run out of all options to save his son.

“I am thinking of going to Delhi to work as a driver, leaving my wife and son in the care of my brother in law. We have no other way to continue Shivam’s treatment. I cannot forgive myself is something bad were to happen to him.”-Naresh

Baby Shivam Kumar’s left eye has been blinded by deadly cancer. He needs prolonged chemotherapy and radiotherapy to survive, but his helpless father has completely run out of money. With help, this poor baby can get back his life from the clutches of cancer. 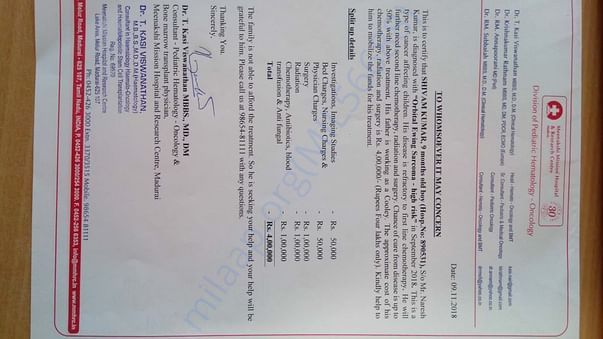 Shivam is doing well. He is currently at home and is recovering. He comes for his regular check ups to Out Patient Department. He might get admitted for his further treatment. We shall keep you posted.

Shivam is doing fine now. He is recovering and responding well to his treatment. He is on his medications now.

Baby is currently receiving radiotherapy and has good response to treatment. He is recovering slowly. We will keep you posted on the same. 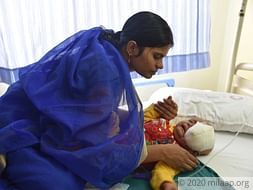