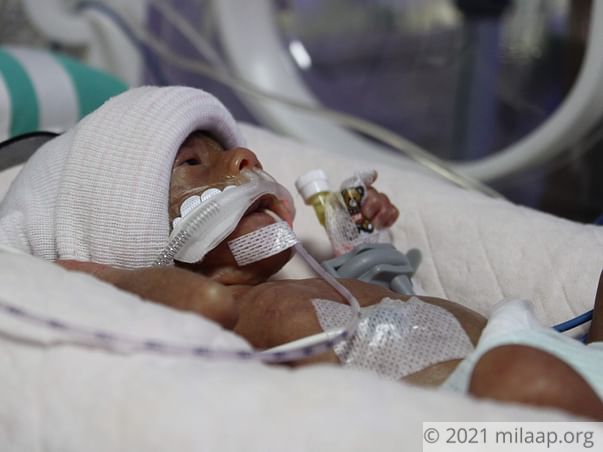 "I have wanted a family more than anything in life. I lost two babies even before I had the chance to see them. This is our third time, trying to save our child. He was born, he is alive. That's a miracle. But, he is struggling to stay alive. He is in pain." - Swaroopa

When doctors told Swaroopa that she was risking her life by continuing her pregnancy, all she asked was if there was a chance that her baby would live this time. A team of doctors and a devoted husband took utmost care of her. Despite all this, she went into preterm labor during her 6th month. She had a baby boy, and he is not out of the woods yet.

Swaroopa used to complain of severe headache and muscle cramps in her legs during her first pregnancy in 2014. Venu never thought it could be serious, and dismissed it as symptoms of pregnancy. She insisted they talk to the doctor about it. The consultation resulted in an abortion.

"She just said I have a health problem and cannot continue. For 6 months I had to go through tests and then I was diagnosed with Lupus. My immune system is supposed to protect me, but it was attacking me instead. I was on medicines. In 2016, I got pregnant again but had a miscarriage just in 8 weeks. It was devastating when doctors suggested I abort my third pregnancy." - Swaroopa

When they could not find a fetal heart rate, Swaroopa was rushed for an emergency C-section

Even as they knew the risks, the couple begged doctors to keep their third child alive. Swaroopa was under constant observation - complete bed rest at home, medicines, and visited the hospital every 10 days. Unfortunately, on January 13th, during her second trimester, Swaroopa went through an emergency C-section to deliver the baby.

"She had her checkup that day. They could not find a heartbeat. He also seemed to have lost weight instead of gaining. As soon as the baby was born, they took him to the ICU. The first time I saw my baby, he was no bigger than my palm. Those wires were bigger than him. They still are." - Venu

The baby was born 740gms, lighter than a small papaya. Over the past few weeks, he has gained weight. He is 1.1kilos now. Swaroopa stays in the hospital all day long watching her baby through the small window in the incubator. Her own condition has gotten worse since they have not been able to afford medicines for Lupus since their baby was born.

"I distribute snacks to grocery shops. I make Rs. 8,000 per month. Of this, every month I spend Rs. 5,000 on Swaroopa's tests and medicines. Rest of it goes towards rent, food, and other expenses. I have less than Rs. 10 left at the end of every month. Somehow, I borrowed Rs. 10,000 from friends, and paid the advance for my son's treatment." - Venu

Swaroopa's son is on ventilator support. He also has a blood infection. He is receiving IV fluids and nutrition through a tube. He needs to be in the ICU for a few more weeks and the total treatment is estimated to cost Rs. 10 Lakhs. Venu and Swaroopa have not told anyone other than their parents about the birth of their baby. Even if they did, it is unlikely for their relatives and friends to help.

"They won't believe this baby will survive because we have already lost two. They believe we are cursed. We have nobody to help us. Please, we have not even held our son, help us." - Venu