5-Month-Old Chokes Every Time He Cries Because Of Cancerous Tumour | Milaap
This is a supporting campaign. Contributions made to this campaign will go towards the main campaign.
Milaap will not charge any fee on your donation to this campaign. 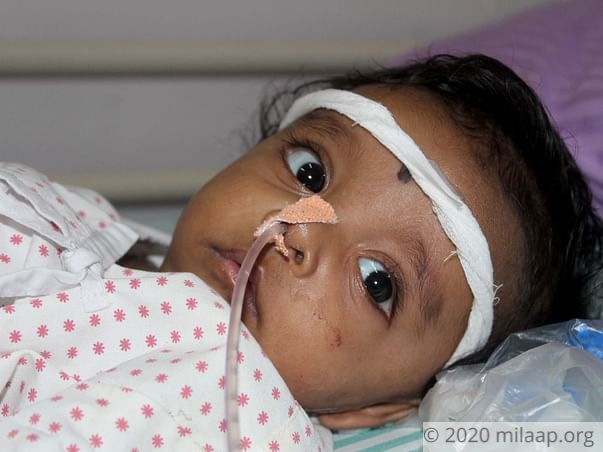 Rajani never leaves her baby’s side. Even when he’s asleep, she watches over him. When he’s awake, she holds him in her arms and talks to him, making exaggerated actions with her hands, while the little one watches her intently with his bright eyes. Sometimes, he even smiles. But Rajani knows that it’s only momentary. Rajani’s overprotectiveness is rooted in her fear of losing her 5-month-old to cancer at any moment, and every day she’s terrified that the tumour in his chest will choke him to death.

“He’ll be lying down on the bed, moving his hands and legs like any other baby, and suddenly, he starts gasping for air. His whole body stiffens as he struggles to breathe. He’s in so much pain every day, but my baby can’t even cry, because every time he does, he chokes. It’s the scariest feeling – not knowing what will happen to him the very next minute. Without treatment, his cancer will spread rapidly and we will lose him even before he's seen a life outside the hospital.” – Rajani, mother

The grave diagnosis that shattered their dreams of a happy family

Rajani and Kumar's baby was born twenty days before his due date, and all the way to the hospital, Rajani was worried sick. “It’s too early, what if he doesn’t make it?” she asked Kumar as they took her for her C-section. To their relief, their baby was born healthy. When she took him home, she wrapped him in the blanket that she had bought a few weeks before his birth and rocked him to sleep, happy that their family was complete. Rajani and Kumar never, in their worst dreams, imagined that just a few months later, their baby would be fighting death.


“When he was three months old, he had a cough and cold. He cried all night because of the discomfort, and I would carry him and walk around for hours till he was asleep. I was so worried, but he started feeling better with medicines. We even started deciding on names and planning for his naming ceremony. But two weeks later, it only got worse. When we took him to a hospital close to our hometown, they told us that he has no chance of surviving. While telling us he has cancer, they also took away every little hope we had.”

Amidst pain and sorrow, they found hope – their baby can be cured with timely treatment

Their baby has a cancerous tumour in his chest that can spread to his bone marrow, bone, liver, skin and other parts rapidly without treatment. Kumar and Rajani took their baby from their home in Srirangapatna to Bangalore in the hope that someone will be able to save his life. He had severe respiratory distress and was immediately admitted to the ICU for five days. But it was only in Bangalore that their faith was finally restored – their baby has more than a 90% chance of getting cured with five months of chemotherapy, followed by a surgery to remove the tumour. However, Rajani and Kumar are struggling.

Despite begging and borrowing from friends and relatives, the poor parents are helpless

Kumar is the sole breadwinner of the family. A daily wage labourer working on other’s farms for a minimal income, Kumar always worked hard to take care of his family. Before their first son, Vijay (3) was born, Rajani and he would spend hours discussing their future and how they wanted their children to be independent, a chance they didn’t have growing up. Now, Kumar and Rajani sit in silence while their youngest gets chemotherapy. The only thing on their mind as they sit by his bedside is whether they can afford his treatment for another day.


“We didn’t have much, but at least we were happy. We had so many plans for our baby’s future, but now I worry that I will never get to see him take his firsts steps. If we don’t find a way to continue his treatment, we will lose him forever.”

All Rajani and Kumar wanted was for a happy, safe and healthy future for their baby, but within months of his birth, all their dreams came crashing down. Their baby boy has a cancerous tumour in his chest, and he struggles to breathe every day. The little one can’t even cry out in pain without putting his life at risk. With timely treatment, he can beat cancer and have a healthy future. Only you can help save his life. 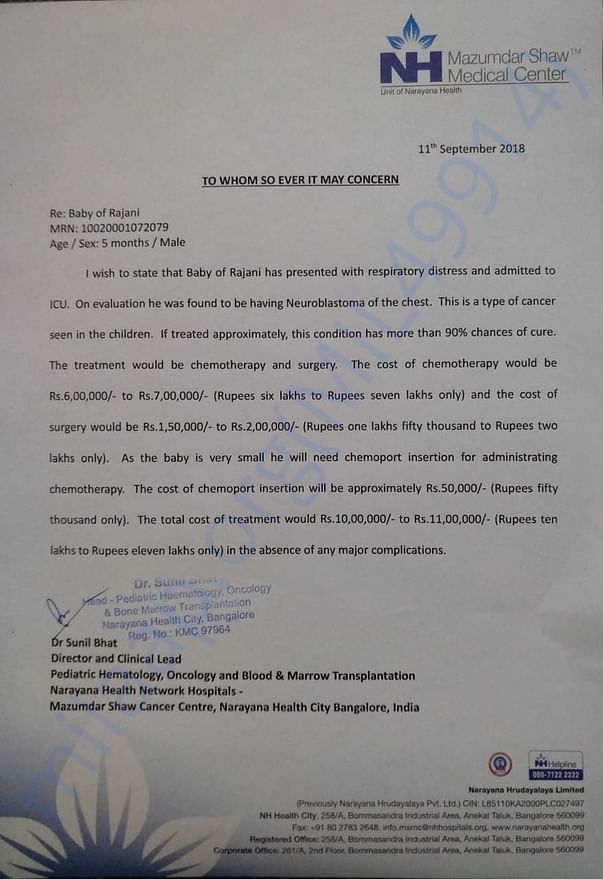 Here is an update on Baby Rajani. Baby is doing good and healthy. There are no side effects so far. Undergoing a 5-day injection course and one more to go. After that will decide the future course of action.

I am grateful for all the love and blessings.

The baby has completed three cycles of chemotherapy. The doctors also successfully removed the tumor and he was discharged from the hospital. He is now resting at home. The doctors have advised for a checkup next week after which they will decide the future course of action. Hopefully, all will go well.

I am thankful for all the blessings showered on him and request you to continue praying for his speedy recovery.

Here's a quick update on Baby of Rajini.

Baby of Rajani is on chemotherapy. Baby is responding well to the treatment and is recovering. 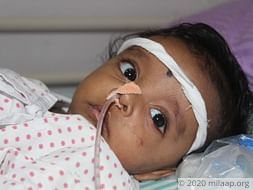