This 4-Year-Old's Fight With Cancer Can End With Timely Treatment | Milaap
This is a supporting campaign. Contributions made to this campaign will go towards the main campaign.
Milaap will not charge any fee on your donation to this campaign. 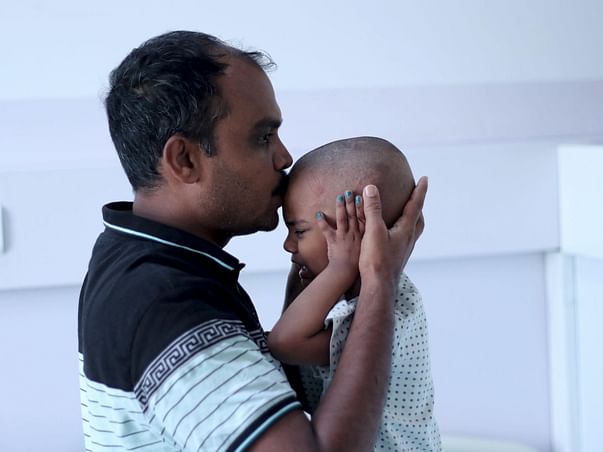 Greeshma can talk your ears off about anything. Whether it’s her new crayons or the new word she learnt to read at school, she always has something to say. Greeshma’s parents, K.H. Gowda and Chaithra, are busy working and studying MD respectively, but they never miss a parent-teacher meeting or a sports day. However, theirs and Greeshma’s smile often hides the pain she’s been through, and her clothes hide the scars of her three surgeries.

Greeshma has only had a glimpse of a normal childhood because of the cancerous tumour in her kidney that was first diagnosed last year. Now, it’s back in her right ovary, and after spending lakhs on her treatment already, her parents can’t afford to save her this time. However, with your support, Greeshma can live a carefree, healthy life.

The beginning of this 4-year-old’s fight with cancer

Chaithra, an ayurvedic doctor, always ensured that Greeshma always went for regular checkups, ate healthily and remained active, which is why when Greeshma started having a fever in March last year, she was surprised that it wasn’t subsiding despite medication. Tests revealed that little Greeshma has Wilm’s Tumour, a rare kidney cancer. She had a surgery in April 2017 to remove her right kidney and even began recovering after chemotherapy.

“Our lives got back to being normal. She started school and I decided to start studying to get my medical degree. But in November we found that it had relapsed. She had another surgery, and we thought that this was the last of her pain. We didn’t realize how wrong we were.” – Chaithra, mother.

A never-ending struggle – for the baby and her helpless parents

Greeshma’s cancer has returned, this time in her right ovary. She needs intensive chemotherapy to survive it. K.H. Gowda, an engineer at a private company, and Chaithra now struggle to juggle between hospital and work. As much as K.H. Gowda wants to be with his daughter, he knows that his only hope to get her treated is to continue going to work, no matter how much she begs and cries for him to stay with her. “But it’ll take me years to afford the 20 lakhs for her treatment. We’ve already spent 18 lakhs in these two years after taking several loans,” K.H. Gowda worries. “I had to ride to and fro, from the hospital and work so much, that I had a slipped disc and needed a surgery for my back. But my suffering is nothing compared to hers.”

However, there’s hope for the little girl

Greeshma has now lost her hair and is quite weak on most days, but she can beat the aggressive tumour with timely treatment. Her spirit and cheerful demeanor are what gets her through every chemotherapy session, but your support will help her fight cancer for good.

“Every time the doctor or nurse come by her bed in the hospital, she tells them that she has got too many injections and medicines for the day and that she wants to go home. She's only a child, all she wants to do is play.“

How You Can Help Greeshma

Greeshma needs chemotherapy followed by radiation therapy to beat cancer for good. Unfortunately, her parents have exhausted all their resources and can’t continue her treatment further. Despite having three surgeries, her fight with cancer continues. They can only save her with your help. 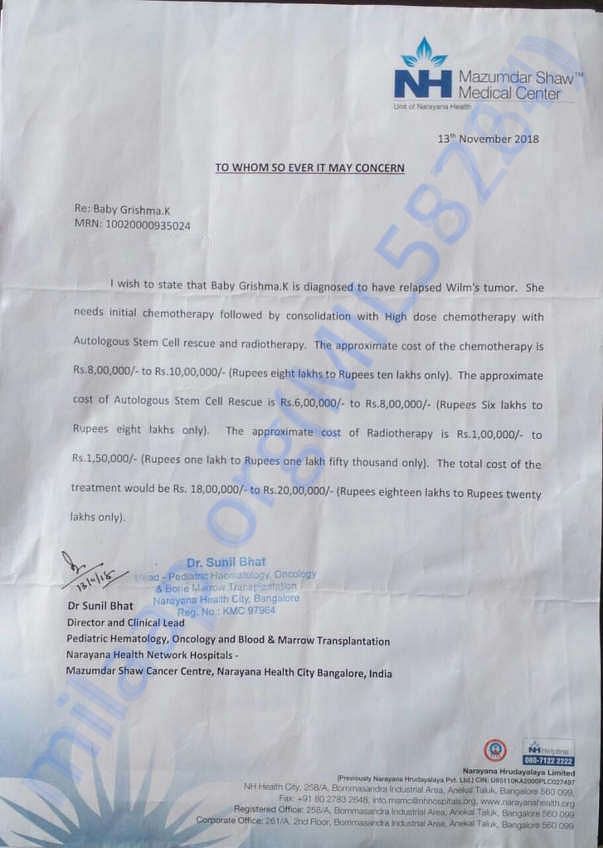 Baby Greeshma is doing better now. Her stem cell treatment is over and her radiotherapy treatment is going on. She is on regular follow up with the hospital also.

Greeshma is doing good now. She got discharged yesterday. She will be going to the hospital day after tomorrow for her check up.Depending upon her results, further course of  treatment will be decided. Her Platelet counts are normal as of now and  is having medication for the same. 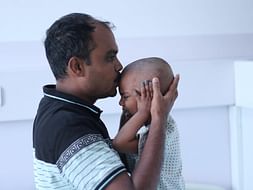