Her Parents' Poverty May Not Let This Baby Girl Get A Healthy Liver | Milaap
This is a supporting campaign. Contributions made to this campaign will go towards the main campaign.
This campaign has stopped and can no longer accept donations.
Milaap will not charge any fee on your donation to this campaign. 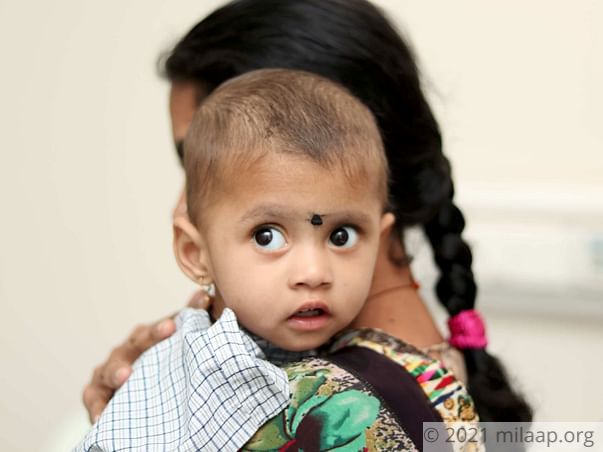 Baby Chintana finally weighs 8 kgs. While this might not seem to be a cause for celebration for many, for Pandappa and Lakshmi it’s the best news they’ve received in months. This means that their 1-year-old can finally have the liver transplant that she needs to survive, she’s the right weight for the surgery. But Pandappa and Lakshmi can’t celebrate just yet – they don’t have the means to afford the transplant. 2018 was one of the worst years for Pandappa, a small farmer. Lack of rain has destroyed his once thriving corn fields in North Karnataka. The transplant that will save his daughter is beyond his means.

‘People say she looks like a healthy baby, but her condition can deteriorate at any moment'

The liver processes everything you eat and drink, which it converts into nutrients that the body can use. Chintana’s liver, however, has failed. Her condition was diagnosed when she was just a 3-month-old baby. Although she needed the transplant then, she was just 3 kgs – she wasn’t strong enough. Ever since then, she’s been on medication and a strict diet of semi-solid food.


“I take her for tests every other week, and she clings on to me tightly. I can feel her tugging at my shirt. When we’re waiting in the corridors and I talk to other parents there, they always tell me that she looks like a ‘normal’ baby. Her eyes aren’t as yellow as a child with liver failure, they say. I then have to explain that her condition could deteriorate at any moment. That’s the scariest part.” - Pandappa, father

Yes, baby Chintana might look like a healthy child, but her liver is giving up on her. She's in constant pain and cries every time she's in the hospital because she's scared of the needles. She needs a liver transplant at the earliest and her mother, Lakshmi, is even undergoing the tests to be the donor – there’s hope, but no funds.

Owing to her multiple hospital visits, they haven’t celebrated her milestones – and she hasn’t had many

Pandappa and Lakshmi couldn’t celebrate their baby’s first birthday. Ever since her diagnosis, they’ve mostly spent their days in the hospital. Baby Chintana will turn 2 this May, but she still hasn’t said her first word yet and hasn’t taken her first steps. She’s not growing as she should.

“All we can do now is wait. I’ve spent nearly 9 lakhs by taking loans and borrowing from family. I feel terrible. She’s reached the ideal weight, my wife is even undergoing the tests, but we just don’t have the money for the transplant. Sometimes I worry that I’ll be the reason we’ll lose her.” - Pandappa

You can help baby Chintana get a new liver

Pandappa is a farmer and earned only Rs. 15,000 the whole of last year. In that, he wasn’t able to save anything for his daughter's transplant due to all the medical costs he has had to bear. Pandappa is in debt. He’s helpless. When he watches his daughter wailing in the hospital, he feels the most helpless. Nothing he does can relieve of the pain. A liver transplant is the only cure. 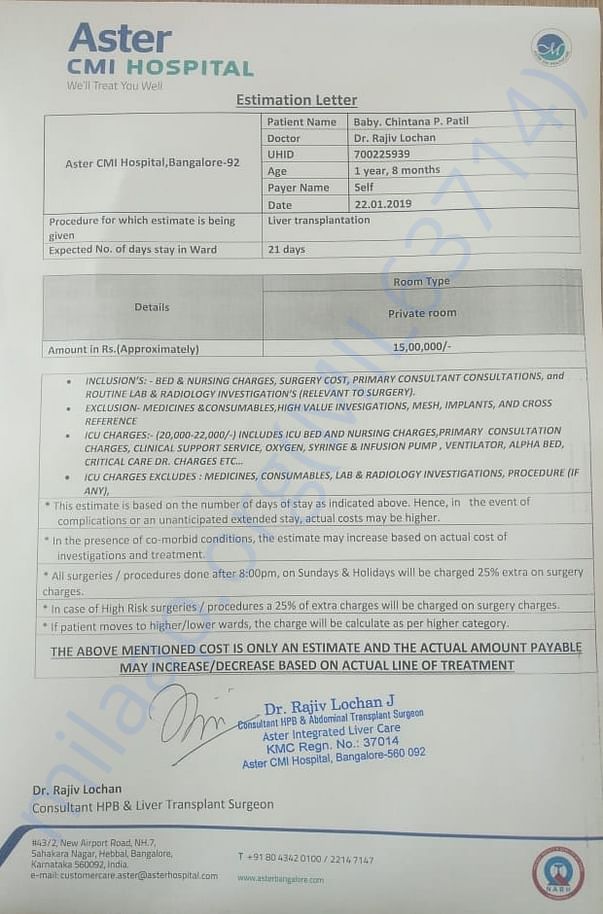 Baby Chintana is no more with us. Baby Chintana was undergoing her treatment but her health deteriorated and she couldn't make it. 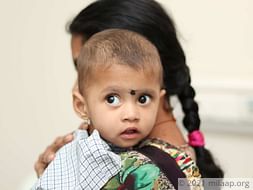