Deserted By Family, Auto Driver And His Wife Struggles To Save Baby | Milaap
This is a supporting campaign. Contributions made to this campaign will go towards the main campaign.

Deserted By Family, Auto Driver And His Wife Struggles To Save Baby 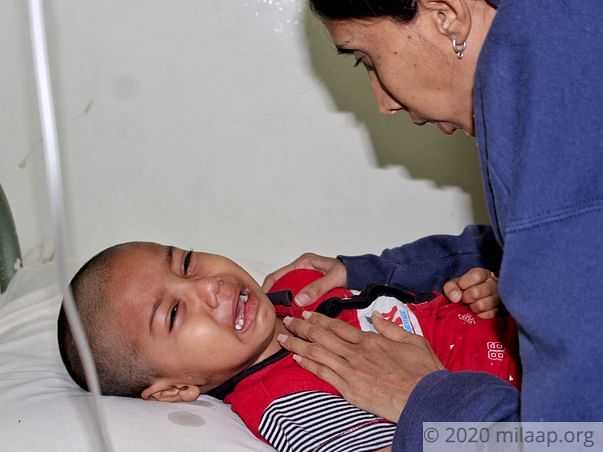 Michael and Savitha fought against all odds to get married. No one from their family supported their union since he’s Christian and she’s Hindu, but none of that mattered to them – they knew that they wanted to spend the rest of their lives with each other. It’s been 10 years since, and they’ve built a small and comfortable world for themselves. Their financial struggles were ongoing, but their family of 4 was a happy one. In their small bubble of happiness, little did they imagine that their youngest child would one day have to fight a disease as grave as blood cancer. It’s only been 15 days since his diagnosis, but it’s been the most difficult two weeks for them – everything has been a blur, every minute has been spent in pain and all their savings have been drained dry.


Charvik before he was diagnosed with cancer

Baby Charvik’s birthday is in a few days, but there will be no celebrations

“If I could describe my son in one word, it would be ‘hyperactive’. He talks to anyone that comes to him and somehow convinces them to play with him. It’s his smile, I think. His older sister and he used to play so much together. He wants to do the same now, but he’s too weak. His birthday is this month, I don’t think we can even take him home then.” – Michael, father

Baby Charvik turns 3 on 21st December, and unlike last year, they won’t be able to get him a cake or balloons that his sister and he will play with. Charvik is now weak and in pain all the time. His bright smile has vanished. He has started chemotherapy, but he needs to continue it for the next 6 months to beat the disease. Michael, an auto driver, earns around Rs. 500 per day but has never been able to save much. In the past few weeks, he hasn't even been able to go for work. He has no means to continue his baby's treatment.

With no family support, his parents are struggling

Michael and Savitha have faced many adversities together. Although they longed for the families' support, and for years tried to get them to accept their marriage, they knew that they had to be each other’s strengths. Charvik’s illness is more painful than anything that they’ve ever been through, and now more than ever, they wish they had their family's support.


“Her parents are no more, and mine still haven’t accepted our marriage. I think any situation is made slightly easier when you know that you have someone to lean on. We can’t leave Charvik alone even for a minute. While Savitha stays with him, I run around the hospital to pays bills, get his test results. I haven’t been able to work these past few days. We have to manage everything on our own” - Michael

Your Support Can Save Charvik

Charvik’s diagnosis was naturally shocking for his parents, but they didn’t waste time starting his treatment. They’ve spent over 1 lakh now by borrowing from friends, but it’s not enough. Charvik needs 7 lakhs to get the complete treatment she needs to fight cancer. He can go home healthy with your help.

UPI: rzpy.givetomlpbabychar004@hdfcbank (Copy to clipboard)
Or
Click here to read the instructions before you make a bank transfer. 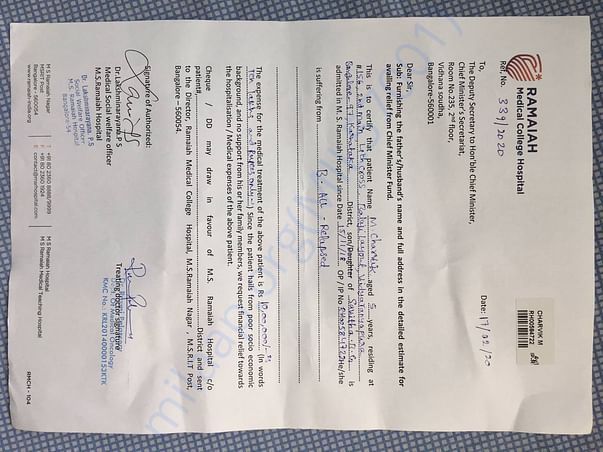 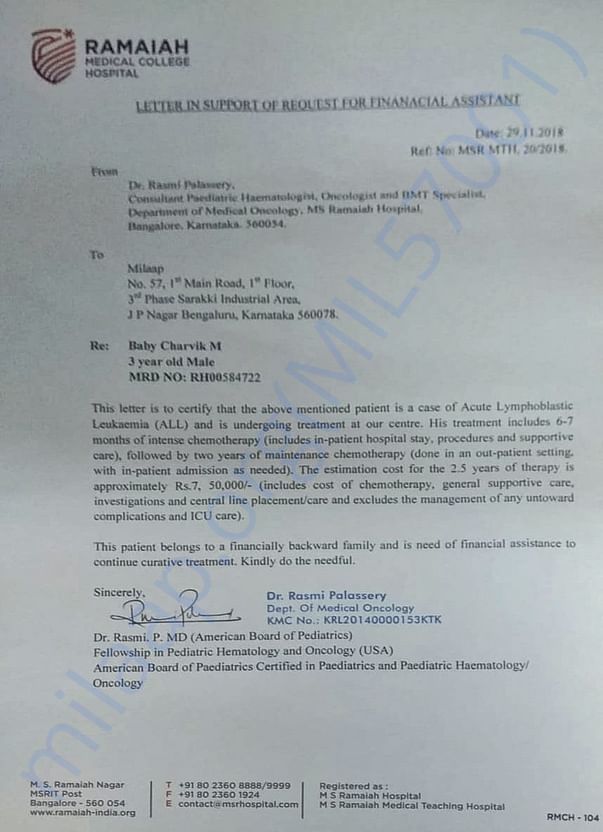 UPI: rzpy.givetomlpbabychar004@hdfcbank (Copy to clipboard)
Or
Click here to read the instructions before you make a bank transfer.

Charvik has been admitted in the hospital. He needs induction chemotherapy. 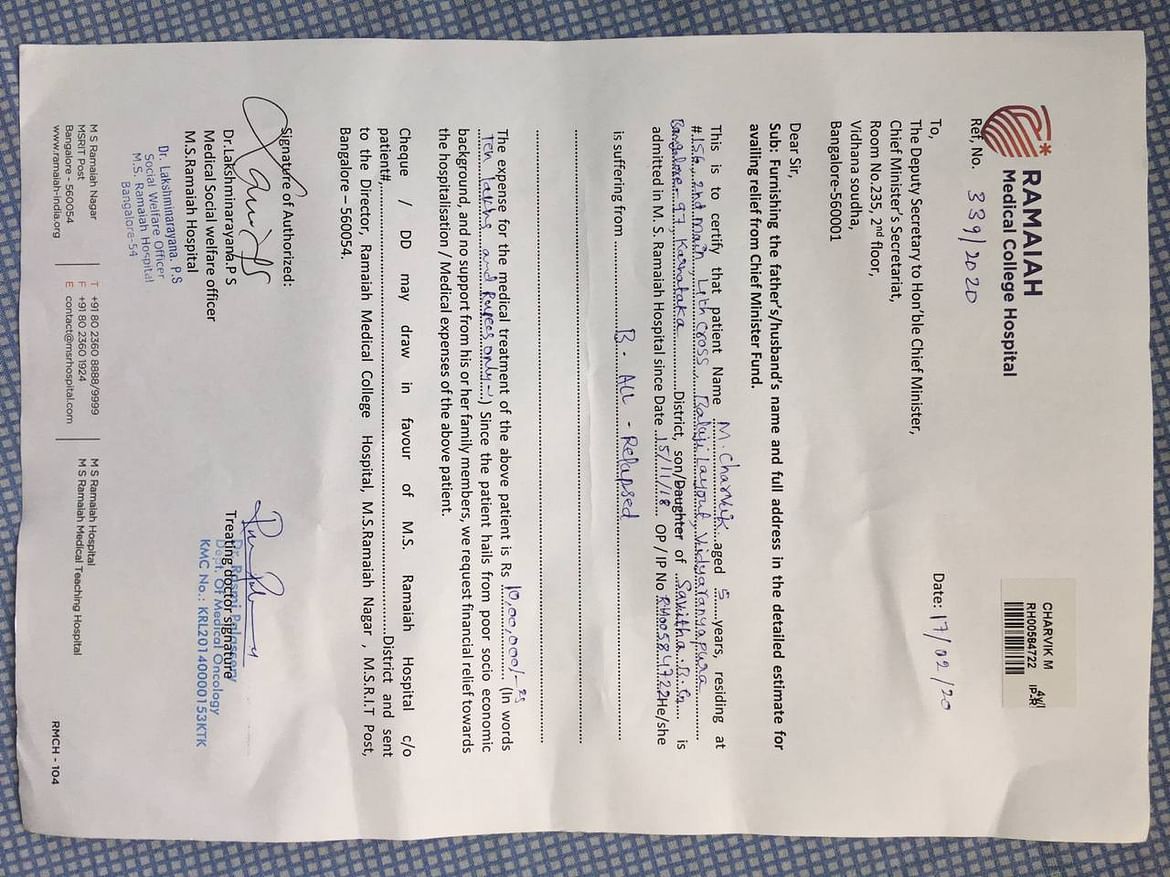 Charvik has unfortunately relapsed and he needs further treatment to recover. Here is a letter from the hospital:

Baby Charvik is doing well. Charvik is undergoing his induction chemotherapy currently and recovering. He is stable and is responding well to his treatment. 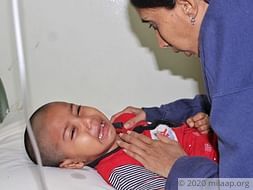 Deserted By Family, Auto Driver And His Wife Struggles To Save Baby