55-year-old Grandmother Struggles To Save Her 1-month-old Grandson | Milaap
This campaign has stopped and can no longer accept donations. 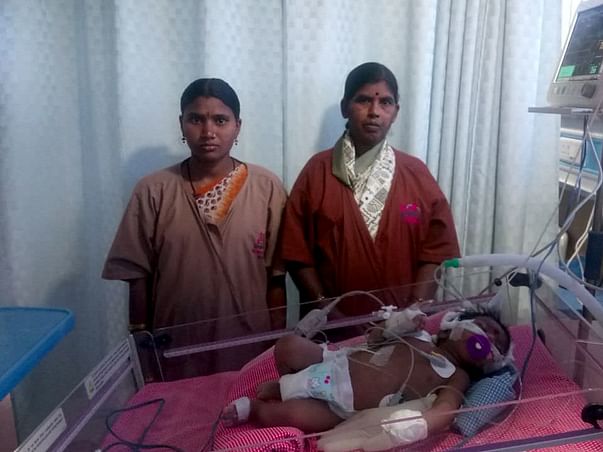 “He wouldn’t stop coughing violently. It was so difficult to watch his tiny body writhing in pain, unable to keep up with what was happening to him,” recalls 55-year-old Shyambai.

Shyambai’s 1-month-old grandson is struggling to hold on to life.

“He was unable to breathe, I could hear wheezing sounds from his chest and he couldn’t stop crying. I was so scared I would lose him. We rushed him to the local children’s hospital. He spent three days in the general ward there, but his condition wasn’t getting any better. The hospital finally told us they couldn’t help us anymore and we would have to take him to a bigger one.”

His 22-year-old mother has tears in her eyes as she recalls the night they moved him to Ankura hospital.

“He had a violent seizure. I had no idea about what I could do to help him. My mother-in-law picked him up in her arms and we walked to the hospital in the middle of the night.”

The doctors at Ankura hospital suspect that the baby suffers from a fatal type of pneumonia called Bronchopneumonia, which constricts his airways and causes so much inflammation that it leads to accumulation of fluids. The baby suffers from pertussis, which is a fatal bacterial infection, causing coughing and breathing. The combination has taken such a toll on his little body that the oxygen supply to his brain is dangerously low, causing seizures.


Teja's baby fights for his life on life support

Teja’s baby has been battling for his life since even before his birth. Her husband’s support, both financially and emotionally declined during a very difficult pregnancy, and after their son was born with frail health, he abandoned the family altogether.

“She needed an emergency C-section, and since an anaesthesiologist wasn’t available at the government hospital we went to, they couldn’t operate her. She was in delicate shape, and I didn’t want to risk her or the baby’s health by delaying the surgery. So, I got her admitted into a private nursing home, where the baby was born.

"I work in 6 houses as their house help, and I had to take a loan of Rs. 60,000 from them to be able to pay the nursing home’s bill. I already owe them 2 lakh rupees that I loaned a few years ago when my eldest son, who is now paralysed met with an accident,” says Shyambai.

Shyambai has no help. One of her sons is disabled and needs to be looked after. The other two have abandoned her and their families. At 55, she is the sole breadwinner of the family. She has debt that she has incurred for her children and grandchildren.

“We have no house; we live on the streets, setting up tents under bridges. My own health is failing. But none of it matters right now, all I want is for my grandson to survive this ordeal.”

The hospital has estimated a total cost of Rs. 5 lakhs for the baby’s treatment. Help this brave woman save her grandson’s life. 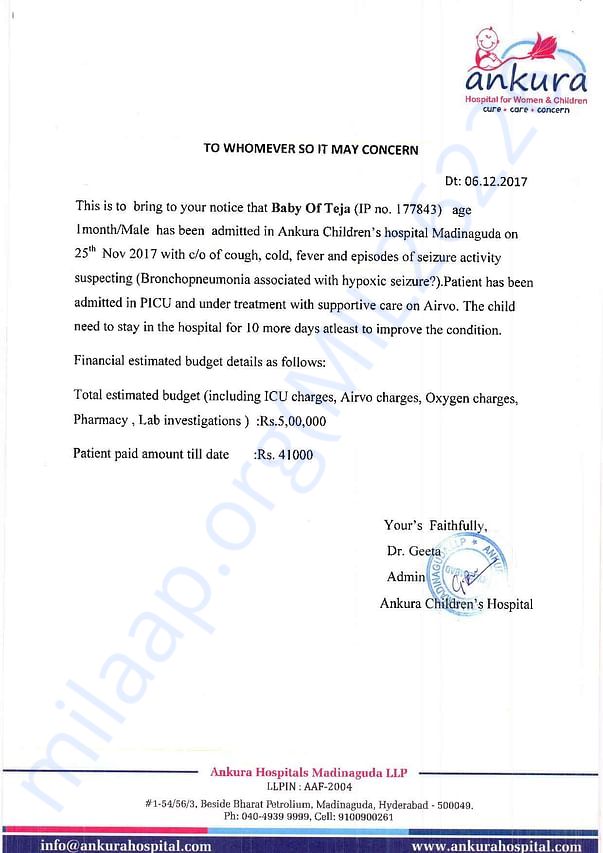 He is at home and we are still taking him for regular check-ups frequently to a local hospital. Although, he is fine and we are taking care of him now we are not sure when we will need to take him back to the hospital as he feels good one month and not so well the other.

Thank You and Please do pray for a speedy recovery.

Thank you the love and support shown towards Teja's baby.

He is presently doing well and is back at home. Doctors have told us that he will be susceptible to infections and that it should not be ignored, so we take him to the local clinic regularly for check-ups.

We are eternally grateful for the love and support shown towards our baby. We would not have reached this far without your support!

Here is a quick update on Baby Teja.

Currently, he is at home and doing better. He has to visit the hospital for monthly check-ups. Doctors are of the opinion that there are full chances of recovery. Will keep you posted on the progress.

Thank you once again.
Regards.
Load more
Donate
OR

Scan & donate with any app
check_circle_outline Download payment receipt
Report fundraiser
Know someone in need of funds for a medical emergency? Refer to us
Rs.306,785 raised

155 Supporters expand_more
This campaign has stopped and can no longer accept donations.
$150 Million +
Raised on Milaap
Are you in need of financial support for medical or personal emergencies, or a social cause?
Start a fundraiser
Or
Know someone in need of funds for a medical emergency? Refer to us
Campaign organizer contact_mail
DN
Dr Niveditha
Beneficiary: Baby of Teja info_outline

Donated to this campaign via Bank transfer/QR Code? Click here if you can’t find your donation listed below.
A
Anonymous donated $25
S
Sunitha donated $50

Donated to this campaign via Bank transfer/QR Code? Click here if you can’t find your donation listed below.
A
Anonymous donated $25
S
Sunitha donated $50 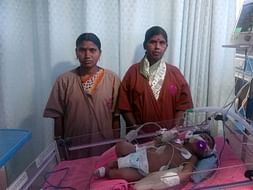