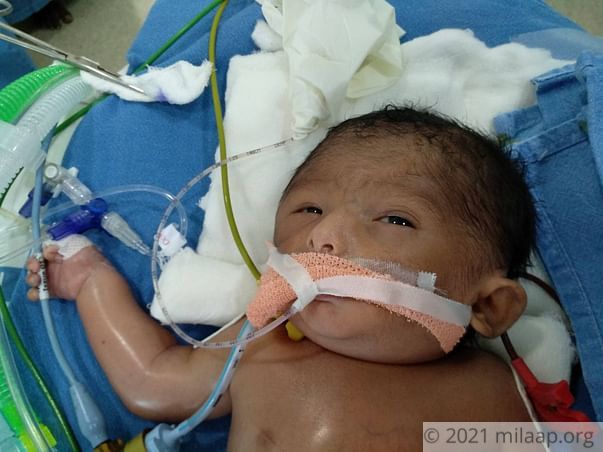 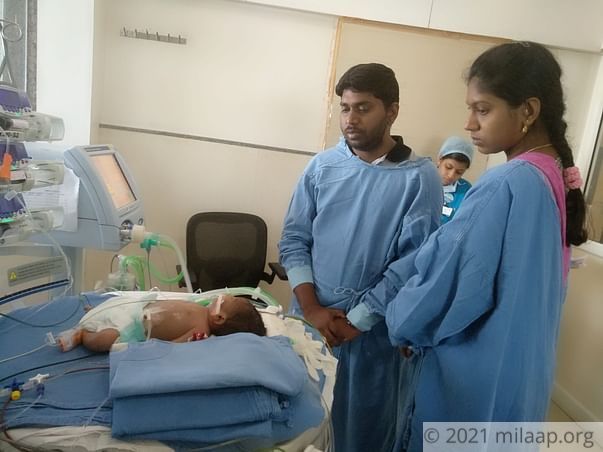 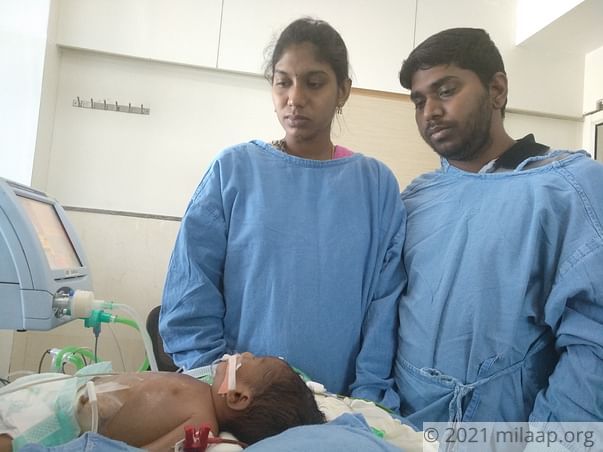 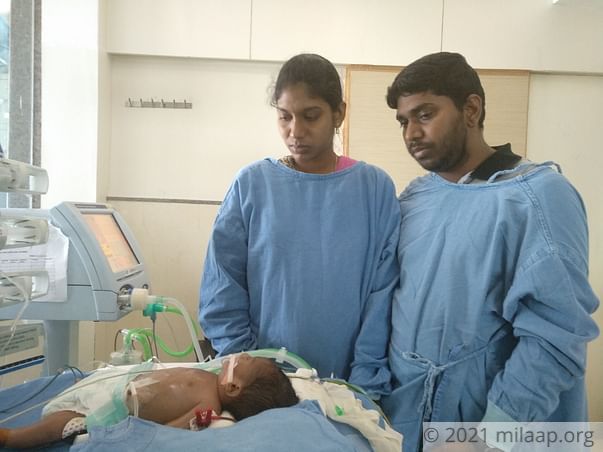 “The first time I saw my son was when he was 3 days old - after they did a surgery to help him breathe. He opened his eyes for the first time when I was standing over the little box he was in. I could not hold him. I could not reassure him that everything was going to be ok. All I could do was hope he got comfort in my presence." - Sushma

Kranthi and Sushma did all the prep necessary for the childbirth. Sushma went to her parents' house and brought back vessels and soft rags that could be useful. Kranthi baby-proofed the whole house. They did not see the labor pain striking earlier than usual. They did not expect the baby to be wheeled into surgery after birth, and they were not prepared to hear that he has just 24 hours to live without another major heart surgery.

He has been racing against time with lungs under pressure, and body getting impure blood

Sushma's son was not breathing when he was born. Investigations showed that the veins that take pure blood from the lungs to the left side of the heart, were too narrow, and go to the right instead. Furthermore, the heart is pumping pure blood back to the lungs instead of the rest of his body. The emergency surgery was to ensure the pressure was relieved in the lungs and he has been on the ventilator ever since.

"Now that his lungs are stable, he needs a major open heart surgery to fix the defect. Otherwise, my baby boy will suffocate to death from inside as his organs are not receiving oxygen. We have just 24 hours now." - Kranthi

“It was at 2 in the night that I woke up in pain. Labour had started in my sleep. We rushed to the emergency and he was taken away soon after birth. No one told me anything. They did not tell me until I was discharged that my son was in the ICU. I was screaming for my baby." - Sushma

The parents are distraught, unable to hold their son in their arms. It took about 5 days for his lungs to stabilize and now, this little boy needs to be wheeled in for another surgery. With less than a week's notice, Sushma and Kranthi are at a loss for options to raise the money required for the baby's medical treatment.

Kranthi and Sushma had bought toys, clothes, diapers and everything that their son required. They were superstitious about choosing a name before birth, but ensured the little child will have everything possible as soon as he was born.

"I asked people how much the medical costs of pregnancy and labor is. I factored in the expenses of raising a child for the first two years. I also began working hard at the office, and saving as much as I could for our baby's future. In fact, I hoped I'd get a better role and raise if I worked hard enough. It was going to help our child. Now, it feels like we have nothing left, and what I thought was enough, was barely anything." - Kranthi

Kranthi has spent close to Rs 3 lakhs in the last 3 days. He needs another Rs 6 lakhs for surgery, but he has no way of arranging for that amount in 24 hours to save his baby.

Your help will give these parents a shot at saving their baby.