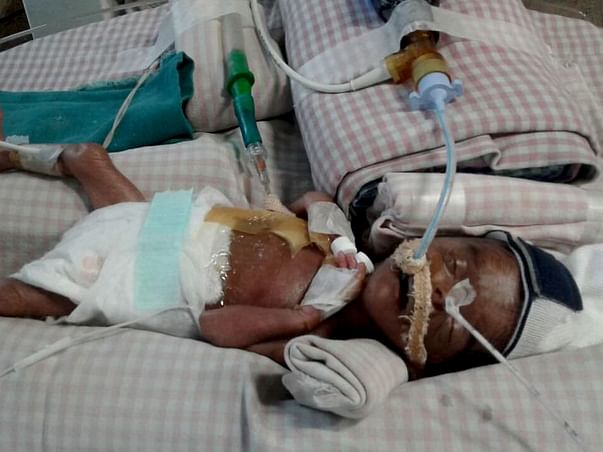 Renu, Anitha’s sister, said, “After the operation, Anitha was really weak and didn’t even have the chance to hold her baby. Now, she only prays to God for her child’s health.”
Anitha Choudhary, who is 40 years of age, was unable to conceive naturally in the past. After trying for years, this is her first child after approximately 20 years of marriage. During pregnancy, she had a problem in her uterus for which Renu advised her to come to Chennai and get treated. She needed to be hospitalized for 2 days for medications. During this, her water broke and the doctors said that they needed to perform an operation urgently to save Anitha and the baby.
“The doctors said there was only a 15-20% chance to save the baby during birth. The baby is alive but had to be taken to the ICU urgently”, said Renu.

On 29th December 2017, Anitha’s son was born extremely preterm, within just 24 weeks of conception. The baby weighs only 570 grams which is way below average too. In addition to this, the baby has irregular blood pressure. Currently, the baby’s lungs need the assistance of a ventilator as they’re too weak to function normally. The baby is also really weak to feed properly, and is currently fed daily through feeding tubes.

Naturally, this has left Anitha completely disheartened and discouraged.

“Anitha doesn’t have the courage to visit the hospital and see her baby in this condition. She is extremely sad and every day, she asks me if her baby will be okay. Occasionally, the doctors say that the baby’s condition has improved but sometimes, they say that it has become worse. As her sister, I’m always by her side and I try to motivate her to pray to God instead of crying endlessly.”, said Renu.

Anitha cannot provide for her child on her own

Anitha is a housewife and her husband, Sudhir, is a 9th-grade school teacher.  While pregnant and before Chennai, Anitha had to visit Kolkata and Delhi for treatments for the same issue. Now, they’ve exhausted their financial resources and have no means to pay for the rising medical bills while their child fights for life in the Newborn ICU.

Within 2 weeks, the bills have already crossed Rs. 2 lakhs and since the baby must stay in the ICU for 2 additional months, the expenditure is likely to cross Rs. 10 lakhs.

Even if Sudhir worked for years, he can’t afford these exorbitant bills. They need your help so that their baby can live and have a normal childhood.

After years of trying, Anitha has finally had her first child. Her baby is extremely premature, underweight, and too weak to feed or breathe. Her child is fighting for life in the Newborn ICU and he needs to be there for 2 additional months. Your contribution will help save the baby by ensuring he gets the much-needed medical attention it deserves.
With your help, Anitha’s baby will be saved and she can finally hold her child for the first time! 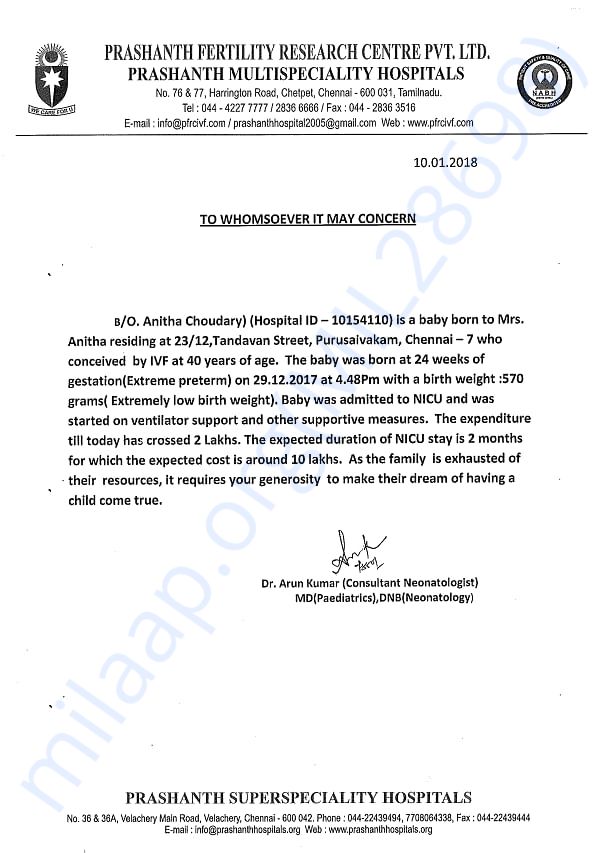 Report fundraiser
See how thousands are crowdfunding for their causes on Milaap
Rs.1,000 raised

DA
You are sending a message to
Dr. Arun Kumar
Go back 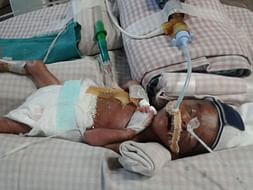