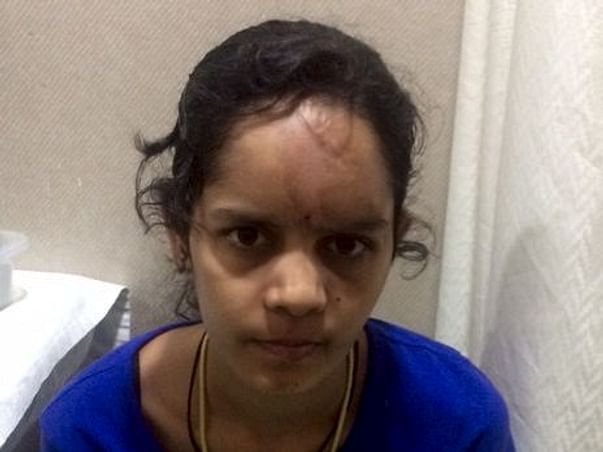 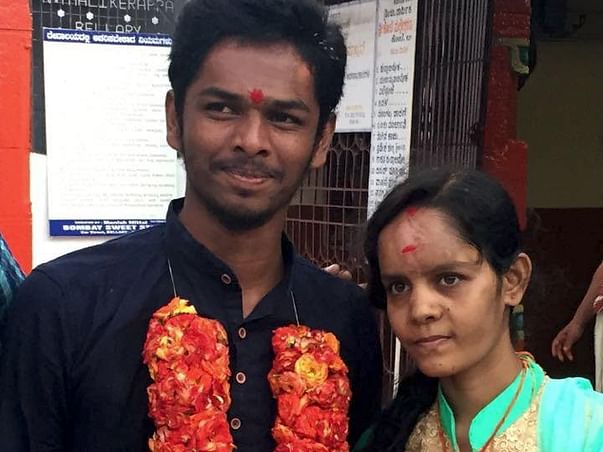 Previous Next
Ayisha is a 23-year-old school teacher. She met with an accident right after her marriage that shattered her thigh bone. It is infected now and she needs urgent surgery to remove it. Ayisha and her husband Kishore don't have savings and need your help before they can finally start their lives together.

Ayisha and Kishore met in college in Gangawati, Karnataka and fell in love. Knowing that they were from different communities - they often felt worried and wondered if being together was worth upsetting their families and communities.
But after being together for 5 years, Ayisha and Kishore saw that they wanted a life of happiness together. Kishore dropped out of college and came to Bangalore and took up sales jobs. He worked very hard and had saved up almost Rs 1 lakh. He was now ready to bring Ayisha to Bangalore and start their lives together.

Ayisha and Kishore before her accident
Coming from humble beginnings, Kishore felt proud of having become a self-sufficient man. Kishore was more sure than ever that this was the right thing for both of them. But nothing they said convinced their families to give the young couple their blessing.
Three of Kishore's friends decided to help them out. They applied for his marriage under the Special Marriages Act. On March 30, 2017, Kishore, Ayisha and his 3 friends were on their way to the registration office in Laggere, Bangalore. Kishore and Ayisha were happily looking forward to their happy ending.

The accident that almost destroyed this young couple's dreams

Unfortunately, the happy group met with a horrific accident the day they applied for their wedding. Two of their friends died on the spot. Ayisha and Kishore were on the backseat and Ayisha took the brunt of the impact. Kishore escaped with a few bruises.
The accident has left Ayisha with a scar on her face and unable to walk
Ayesha had a badly broken thigh bone and the skin on her face from above the eyebrow to below her cheekbone had peeled off. Ayesha's family took her to a hospital at Hubli, where she had to undergo plastic surgery on her face and treatment for her broken leg. A rod was put in her thigh bone.
By May 2017, they both were out of touch. They did not even know if the other person was alive. It was only when one of Ayesha’s friend met her and told her that Kishore is alive she was thought of connecting with him again. They reunited only by June - but much seemed changed.
Ayisha was unable to walk and had a big scar on her face. But the two decided that they couldn’t live without each other and got married. Finally, they have started their life in Bangalore as they had planned.
Kishore and Ayisha got married at the registration office they had applied to before the accident

Kishore needs to save Ayisha to have his happy ending

The rod which was placed in Ayisha's leg is infected. She cannot walk and needs two surgeries one to remove the infected bone and the rod. The other to stabilise the fracture and reconstruct the bone. Without these operations she may lose her leg or even die.
Ayisha is still in great pain with her fracture getting infected. But by now, Kishore is totally broke and all the savings he was so proud of are all gone. The couple need Rs 2,05,000 lakhs to save Ayisha.
Ayisha has suffered a lot of pain and heartache in the last six months. Please donate towards her surgery and help her get back on her feet again. Give this brave couple's love a chance and contribute now. 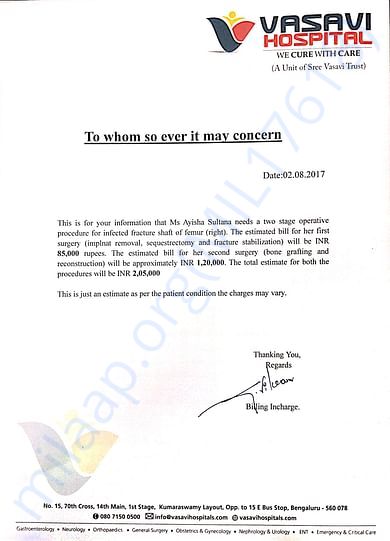 Mrs. Ayisha has been operated and being discharged on 30.10.17. She is recovering and she is now able to walk. Also, physiotherapy sessions are being given for her speedy recovery.

Thanks for coming forward to support this couple.
Donate
OR

Scan & donate with any app
check_circle_outline Download payment receipt
Report fundraiser
Know someone in need of funds for a medical emergency? Refer to us
Rs.113,016 raised

Donated to this campaign via Bank transfer/QR Code? Click here if you can’t find your donation listed below.
A
Anonymous donated Rs.2,500
D
Devanshi donated Rs.500

Good luck you both <3

Best of Luck for the young couple

Donated to this campaign via Bank transfer/QR Code? Click here if you can’t find your donation listed below.
A
Anonymous donated Rs.2,500
D
Devanshi donated Rs.500

Good luck you both <3

Best of Luck for the young couple