Cancer Has Brought My Son to the Brink of Death Once Again | Milaap
This is a supporting campaign. Contributions made to this campaign will go towards the main campaign.
Milaap will not charge any fee on your donation to this campaign. 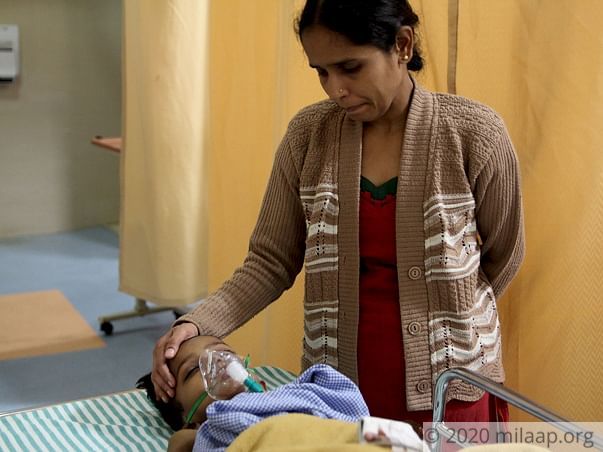 Anvay was barely 2-years-old when he was first diagnosed with blood cancer. Hema and Raghavendra’s life came crashing down, but their son fought long and hard to beat cancer. Anvay had only just begun living the life of a normal child when his cancer returned. Now, Anvay lives in fear - of hospitals, injections and being alone. All Hema can do now is hold is hand and try to comfort him while he struggles. Cancer threatens to take away this 6-year-old’s life once again, and he’s running out of time without urgent treatment.

“The day they told us that he was cancer free was the happiest day of our lives. He finally had a chance of going to school and growing up. For two years after that, he and his brother filled the house with happiness and laughter. Every day we were grateful to have him back with us. Maybe it was all too good to be true. Now he’s suffering more than ever. Cancer has brought my son to the brink of death once again, and this time there’s no going back if he doesn’t get treated.”

Anvay’s cancer was diagnosed in 2013, but after a brave fight, he recovered. His parents thought he had beat cancer for good, but two years of health and happiness later, Anvay is back in the hospital fighting an even bigger battle. This time, only a bone marrow transplant can save his life.

Anvay is always in pain. If not for the numerous painkillers that he’s given, he wouldn’t even be able to walk without his legs trembling in pain. He’s too weak to move and only finds solace in his mother’s presence.


“I can’t leave him alone for even a minute. He’s so scared all the time. He keeps crying and saying ‘amma everything hurts, I just want to go home’. I stay strong and tell him I’ll take him home soon, but when I’m alone I can’t help but break down. He’s going through so much and I feel so helpless as a mother. I wish I could suffer from this pain instead of him, he doesn’t deserve this.”

Anvay can be saved, but his parents don't have the means to get him treated

“We don’t have anything left anymore. We only have a roof over our head to call our own, but all our savings are gone. When we found out about his relapse, we didn’t even know if we could afford to admit him. We begged and borrowed from people, thinking that we’ll take each day as it comes. We can’t give up on Anvay, but we’ve come close to stopping his treatment. No matter how badly we want to save him, our debts are holding us back.”

Raghavendra works as an assistant accountant for a transportation company and has spent all his life’s savings on saving Anvay from cancer the first time. After years of paying for treatment, his hands are tied, and pockets, empty. The dark cloud of worry about his medical expenses looms over the couple constantly. They have no one to turn to, and without treatment, Anvay can’t escape the eventuality of cancer.

Anvay’s fight with cancer has begun again. He has a long road of recovery ahead of him, but with treatment, his parents can finally take him home again and he can have a chance of a bright future.

Your support will save Anvay’s life. 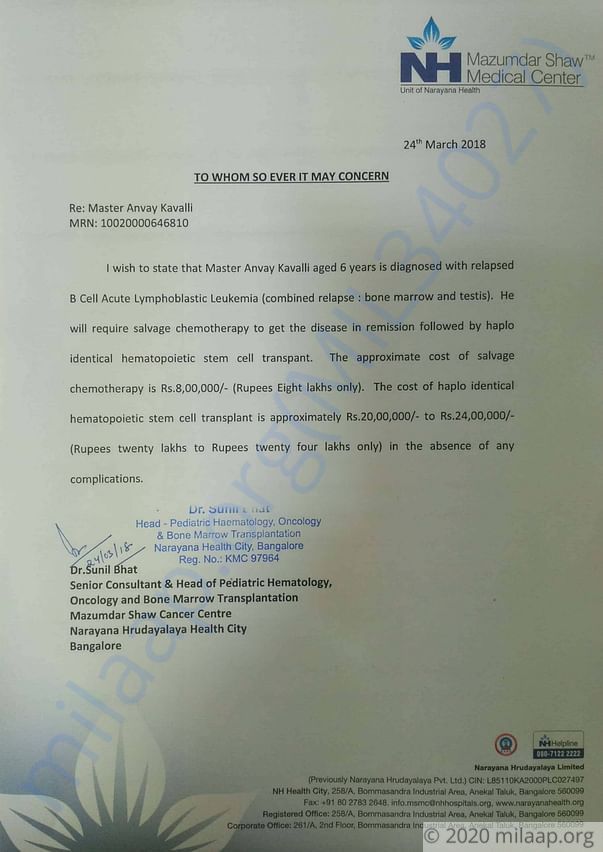 Thank you so much for all your love and support.

Anvay is doing well and we are taking him for his follow up consultations regularly.

Anvay is doing well. He was admitted in day care for vaccination. 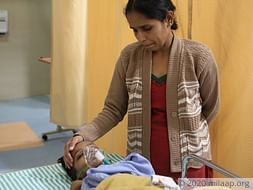