Despite Selling Everything, Father Is Unable To Save His Daughter | Milaap
This is a supporting campaign. Contributions made to this campaign will go towards the main campaign.
This campaign has stopped and can no longer accept donations.

Despite Selling Everything, Father Is Unable To Save His Daughter 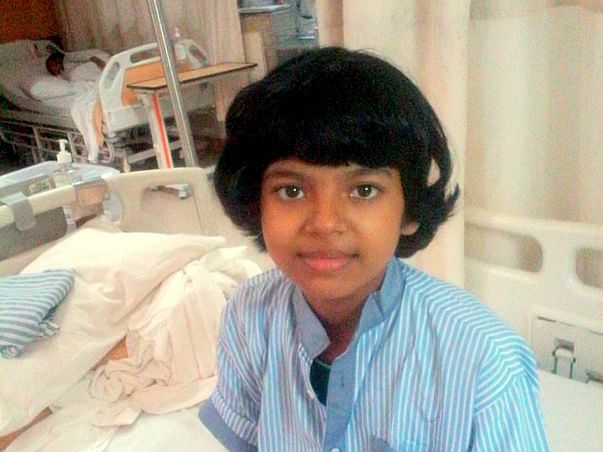 The night walks, after the dinner with her father were always little Anushka’s favourite. She used to talk about a million things to her father as they used to gaze at the stars together. Anushka dreamt of watching those stars through a telescope, learning more about them when she grew older. But now she doesn’t feel like going out at all. She fears that people will laugh at her when they find out that she has no hair left on her head due to the strong chemotherapy she is undergoing to fight her cancer. Her father, Naba Gopal sheds tears of despair as he is unable to continue his daughter’s treatment despite selling all his wife’s jewellery and taking huge loans from moneylenders.

“Three years back we noticed a swelling near Anushka’s groin. It was painless but my wife, Shefali and I still decided to take her to the hospital. The doctors immediately admitted her and conducted some tests. When the doctors explained to us the test results, our entire world turned topsy turvy. My little daughter, who was playful and happy only few days back, was now down with cancer.”  - Naba Gopal, father

A brave warrior, Anushka defeated cancer once but the stubborn disease made its way back into her life

With the help of chemotherapy and a lot of care from her parents, Anushka was making progress. Slowly she was regaining her strength and had started getting back to studies, playing with her friends. But destiny had a cruel game in mind. Despite six cycles of chemotherapy, on the month of September this year, she started getting sick.


An old picture of Anushka

“She had no appetite at all and was visibly losing a lot of weight. She was almost 34 kgs then. Soon she started running a temperature and had a bad cough. We decided to waste no more time and take her to the doctor. There we got to know our happy days are over - that cancer has come back into Anushka’s life.”

Anushka used to ace at her studies and always made Naba Gopal and Shefali proud. But not just that - she was also interested in quizzing, music, elocution and even received prizes for them. But all of these seem like a dream for Anushka now who can hardly leave her bed.

Anushka with all the prizes she has won

“I can’t explain how helpless I feel as see my little daughter suffering so much. She doesn’t ask me anything but I know she looks up the internet to know more about her disease; the treatment she is being given and how long patients like her live. Tears flow out of eyes when I think that with the meager salary of a conch bangle-maker in Barrackpore,  I won’t be able to continue my daughter’s treatment. I earn only Rs 250-300 a day and I have already spent Rs 4 lakhs by borrowing from relatives and even selling my wife’s jewellery. I have planned on selling our small house and live with my brother in Kolkata but I don’t know if that would still be enough for treatment.”

12-year-old Anushka is battling from cancer and needs treatment to fight back the deadly disease. Her parents are deep in debt and in no condition to arrange for the money that is required. You can bring the smile on Anushka’s face and give hope to the distraught parents by making a generous contribution.

Your support can save little Anushka's life 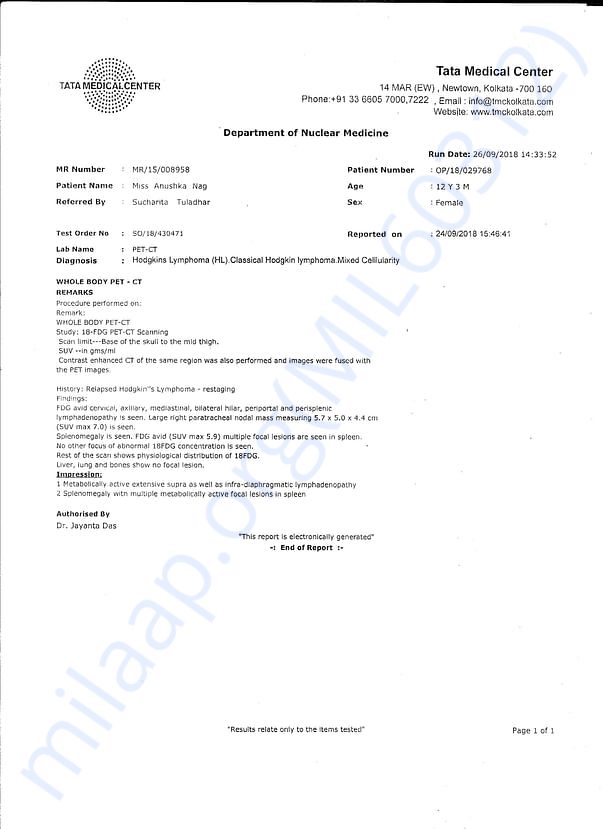 This is an estimated expenditure from Tata medical center with details 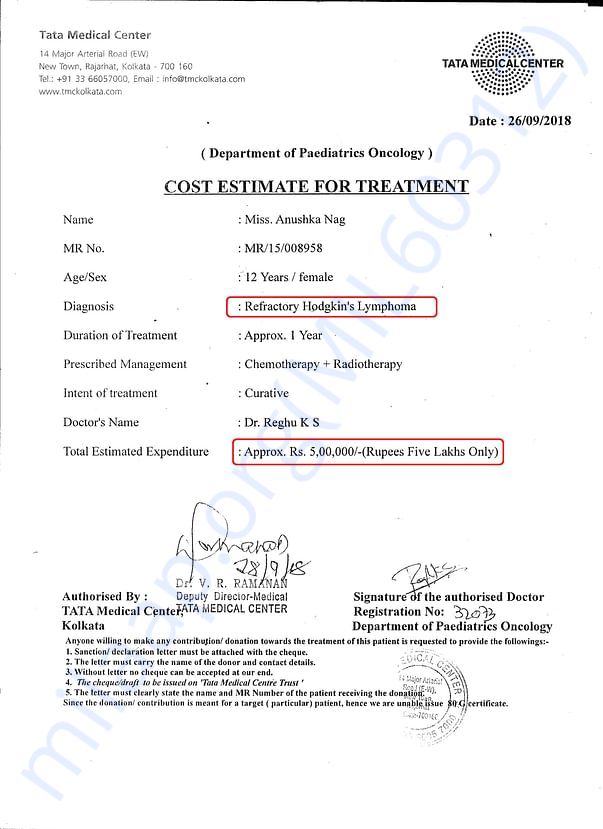 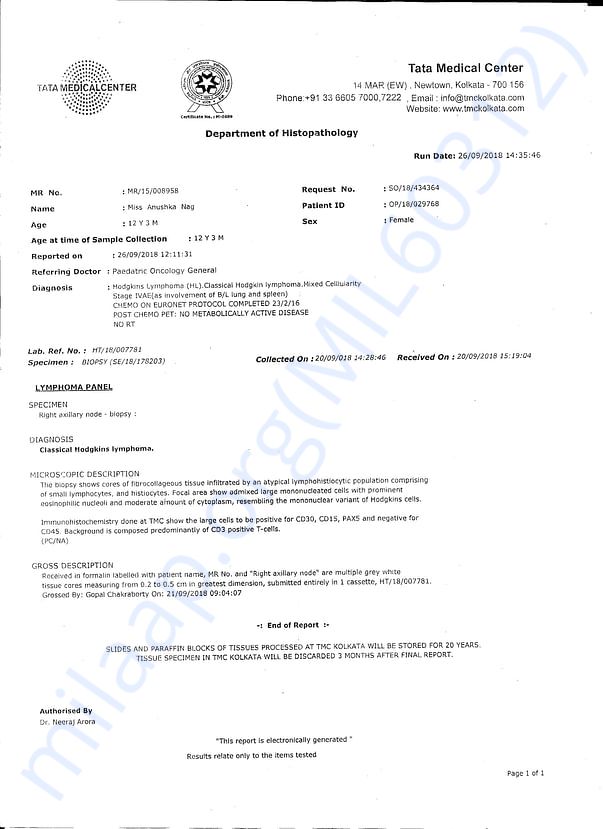 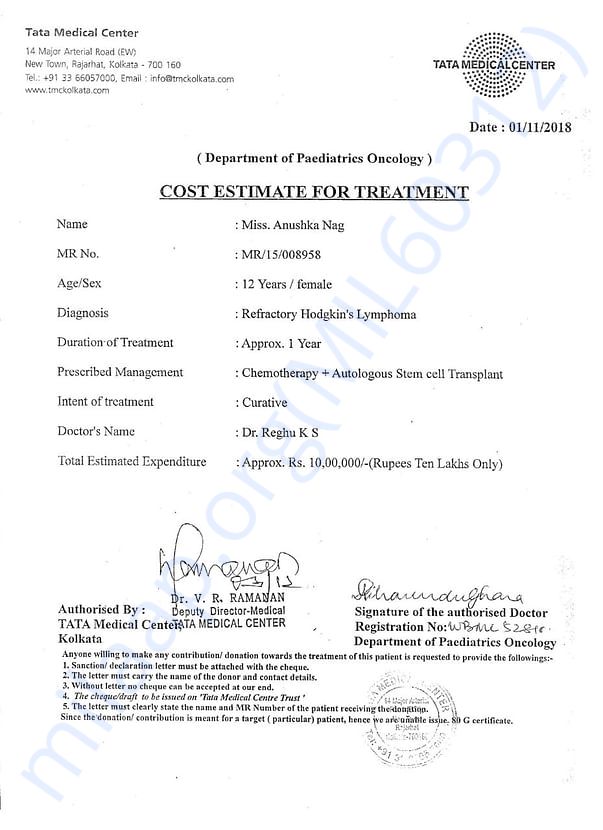 We have a piece of GOOD news for you, Anushka has completed her chemotherapy and Autologous Stem cell Transplant, a big thanks to milaap team and to all the donors who made this possible. Now she is under constant checkup and she has to go hospital every week. She is regaining her strength again, her hair is started growing and she's hoping for going to school soon. But the danger hasn't gone yet and we still need your prayer so she can live her dream, go to school and become a person maybe who can support others one day.

Thank you all once again and Thank you Milaap team
Dear Supporters,

Thank you for your support. Anushka is doing very well with her treatment. She has finished her 4th chemo cycle and now we are waiting for her 2nd PET-CT result which will be shared on Monday.

After that doctor has suggested for a stem-cell transplant because she will be given a high dose of chemo on her next visit to the hospital. So we need the money to be transferred to her treating hospital.

Do pray for her health and speedy recovery. Will keep you posted.

Anushka is doing fine now. She has finished 4 cycles of chemotherapy and she needs to undergo 2 more cycles. Because of the chemotherapy her skin has turned blackish and she has ulcers in her mouth.

She will be undergoing a CT scan later this month. The doctors will gauge how much the chemotherapy has helped. After the 2 cycles of chemotherapy are over, they will inform us when she can undergo the bone marrow transplant.

Do keep her in your prayers. 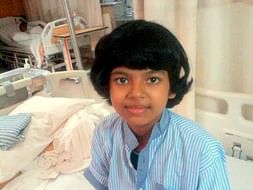 Despite Selling Everything, Father Is Unable To Save His Daughter