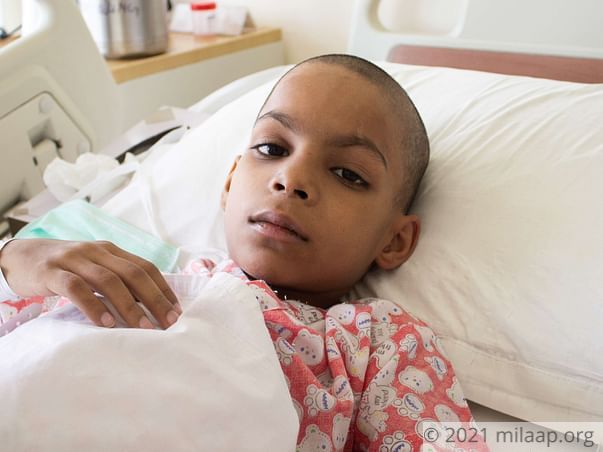 “I was nervously pacing up and down waiting for the doctor to call me back with my son, Anuj’s reports. I was shaking when I picked the call. I heard what I was most scared to hear. My 9-year-old son had cancer. His nose bleeding was not due to dry weather. It hit me hard that Anuj might only live for a few more days now”-Naresh, Anuj’s father.

Cancer made him bled thrice an hour, and it has left him bedridden

Anuj is the younger child of Naresh and Puja. While their elder son, Hari is the silent one, Anuj was always the naughty one. For the past one month, their roles have been reversed. Hari keeps asking his brother to play, but Anuj is too tired to even get up from his bed. Cancer has sucked the life out of him.

“A month back my child suddenly had fever. Paracetamol didn’t seem to work on him. His fever kept coming back. The day after we admitted him to the hospital for the tests, he started bleeding from the nose. He bled thrice in an hour. While we wanted to believe that it was due to dry weather, doctors told us it was something way severe.”

Sometimes Anuj becomes so weak that he even loses his appetite

Anuj has acute myeloid leukemia, a severe form of blood cancer. He has constant fevers and bleeds from his nose sometimes. Due to the blood loss, he becomes too weak and loses his appetite. He has started losing weight too. He gets tired even if he sits and plays for a little longer.

“My child’s condition was deteriorating. We had to move from our home in Agra and rent a room near the hospital in Gurgaon. He falls sick any moment and his condition becomes so bad that we feel like the night wouldn’t pass. We had to leave Hari back at home with my mother. None of my sons know that Anuj is fighting something so fatal. All they know is that he has blood infection and needs to get treated."

Without urgent treatment, Anuj will not live, let alone go back to school

Anuj hasn’t been able to go to school in his new session. He keeps asking his mother when can they go back to Agra. He doesn’t understand why he has to go through the painful process of chemotherapy and take medicines that make him weak. He doesn’t know why he can’t go to school like his brother. His parents have no answers to any of his questions. They don’t even know if they can take Anuj back home alive.

“We can’t accept what destiny has brought to our child. Puja tries to be strong in front of Anuj. But once she leaves the hospital room, she breaks down. Puja is the one who spends maximum time with the children. While I have begun accepting the situation, she is still in denial.”

They are ready to even starve, but they need money to save their son

Naresh works as a caretaker in a small shop and barely manages to earn Rs 7000. Puja works as a tailor and manages to earn a maximum of Rs 2000 a month. In just a month, they have already spent over Rs 2 lakhs which is almost twice what they earn in a year.

“I have been forced to take money from my in-laws and friends. The little savings I had is gone, I have paid for his treatment by using his school fees. The money kept for food is over now. Neither Puja nor I can even work now. We have no income. I am ready to starve for days, but I will have to save my son. I can’t let him die.”