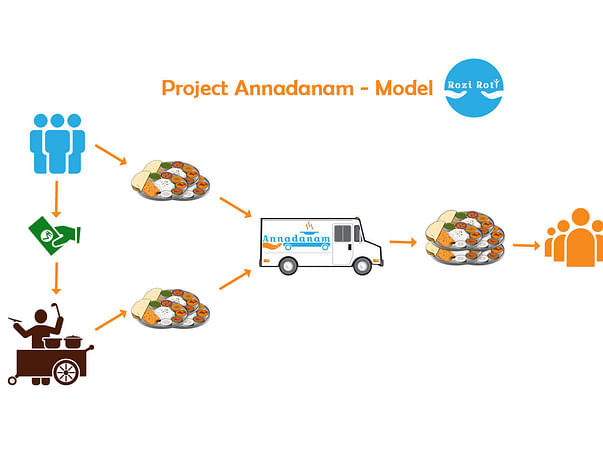 Share
Summary
Project Annadanam is an initiative which will use food vans and voluntary donations to help provide food to the urban destitute in major Indian cities.
The Problem
One of the primary issues that has bothered us, the promoters of this initiative, is that the level of destitution we see in India, especially in our urban areas is quite rare across the world, even when compared with poorer countries. We have seen this first hand as international development professionals who have worked extensively across most of India as well as in quite a few other developing countries.
Hunger, in particular, is a persistent issue. You read about and on occasion, even witness people eating food off garbage bins for instance. 20 Crore Indians are undernourished. 48% of women of reproductive age and 59% of children under 5 are anaemic. Three out of ten children under the age of 5 are underweight and 4 out of ten are stunted. The Global Hunger Index, 2017 published by International Food Policy Research Institute places India 100th in a list of 119 countries and classifies our country under ‘serious concern’ category. The rank is worse than nearly all of our neighbours including China (29), Nepal (72), Myanmar (77), Sri Lanka (84) and Bangladesh (88), except for Pakistan (106). The report estimates that at current levels of reduction in hunger, by 2030, India is still likely to have ‘moderate’ to ‘alarming’ levels of hunger. There is little that is being done to address the challenge of chronic hunger, especially for those who are most vulnerable.
Some of us have personally cooked and donated food a few times, but the food we have had was inevitably inadequate. Moreover, while it helped assuage our conscience a little bit, we did understand that what we were doing was a drop in the ocean, at best. That was when we became aware of food banks and soup kitchens in the western world. We needed something similar, but at much larger scale, here in India. That is how the idea for Project Annadanam took shape.
The Model
In a nutshell, Project Annadanam is an effort to connect people who are willing to donate food to people who really need it. We aim to establish food routes in our large cities, where our food vans would pick up food from individuals and institutions ready to donate food and distribute them to the needy at key points like religious places, pavements, slums, and so on. Another mode of ensuring availability of food to distribute would be through meal sponsorships. In addition to providing cooked food, food donors would also be able to sponsor meals (pay the cost of meals) for the urban destitute. This would enable individuals and institutions who can donate money, but perhaps not food, to contribute to the project. We will get the food sponsored by meal sponsors cooked in order to distribute to the destitute.
The Pilot
Before we launch, we would like to conduct a pilot project with just one food van in Hyderabad for a period of three months. During the pilot, to ensure that we have adequate meals to distribute, we plan to cook and distribute a minimum of 100 meals a day in addition to what we are able to collect as food donations from donors.
Fund Requirement
The funds we request would go towards costs of buying a van and altering it for food distribution, and operational costs for the pilot period as well as for an extended period of three months after the pilot. The detailed allocation of estimated costs is provided below:

Who are we?
Project Annadanam is a project initiated by Rozi Roti Foundation, a registered section 8 non-profit. The foundation is promoted by a group of professionals who have been involved in various aspects of international development.
While we are still developing our website, you can go through our twitter handle or our Facebook page to know more about project Annadanam. You can also contact us on rozirotifoundation@gmail.com or on +91-9652884745.
If you wish to learn more about the promoters, you can go through our linked in profiles which are provided below:
Anjaneyulu Ballem, Denny George, Veena Yamini A and Arunabha Bhattacharya.
We look forward to your support and help to make a difference to those who go to bed hungry.