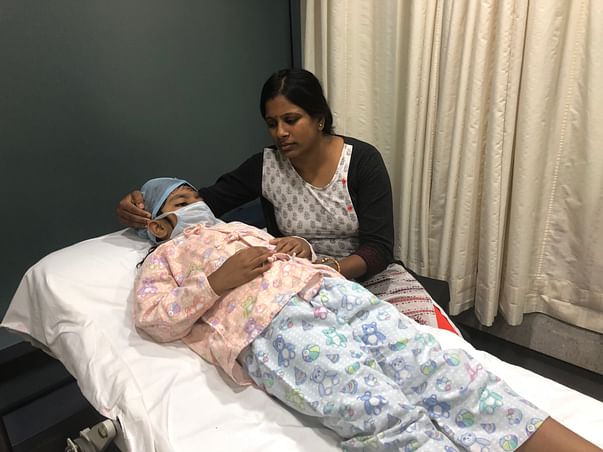 Respected Sir/Mam,
This is an urge for to support a critical health condition for one of my friend’s daughter, named; Aishika Ghosh.
She is in the verge of mortality as she has been affected by Thalassemia Beta Major from her early age of life.
Aishika, daughter of my friend Tarun Kumar Ghosh would now need to have an urgent bone marrow  at the TATA Madical  Centre, Kolkata. Her MR number is MR/11/002002
She is just a 8-year-old girl who loves to play with her friends. She likes to draw and listen to songs. She likes to study and laugh as loud as much as every other normal child but alas; her ailing disease is making her weak day by day.
This traumatic story begins at early age of Aishika as a new born, a baby of only 2 months; when she has been transfused by Blood on a regular basis. She is now the only hope to remain with her parents Tarun Kumar Ghosh and Subhra Ghosh.
To save Aishika by the way of transplanting Bone Marrow form her own sibling , Aishika’s mom and dad had earlier decided to have another healthy baby in the year of 2013 however, the antenatal test of the pregnant mother during the trimester’s suggested that the new baby would also born with the same deadly disease. Hence this ill-fated parents could not save their second child.
Then they could not get a single option but to go for an unrelated Matched donor for Bone Marrow Transplant. Back then, parents of Aishika’s life has been miserable same like their daughter and there is no day that cross by where her mother don’t weep, her father could swallow the sadness inside him.
With the terrible fate, her father and my friend Tarun has also lost his current job as he was working in a private company and his employer wanted him to be dedicated at work and not towards at her daughter.
Their life is at pathetic road's end, in a narrow path where the couple has no option left but to seek help from the Public of a great country named India.
Aishika Ghosh, a 8 yr old girlchild of India, would now need INR of 35 lakhs which shall include stem cells transplant of INR of 8 lakhs. The hospital where Aishika is being treated (TATA MADICAL CENTRE , KOLKATA) sought the funds to be accumulated at the earliest before the treatment as they fear unavailability of funds would hampered the treatment process.
Hence, we are requesting to all the citizens of India to help us fundraising for Aishika at Milaap. Org platform such that a daughter of India could lived her life happily everafter. We seek your blessings and help dear fellow citizens.
Yours faithfully
DEBOJYOTI MUKHERJEE