Library for Panchayath Primary School | Milaap
Milaap will not charge any fee on your donation to this campaign. 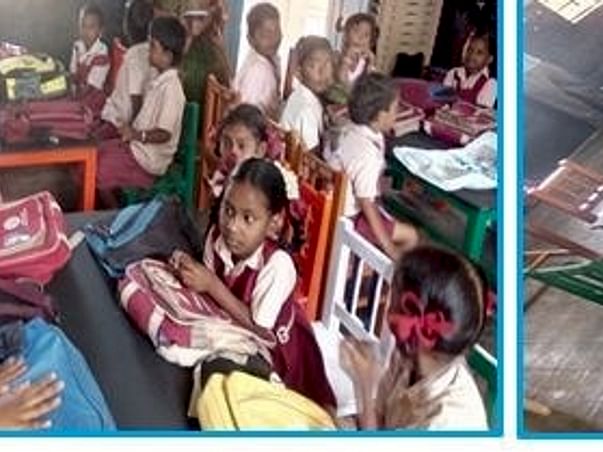 Alumni of Chemical Engineers Stream of 1974-1979 Batch from Annamalai University have initiated a Charitable Trust focusing Education for poor students.
We have registered the ACE 1979 Charitable Trust on 26th February 2016. We decided to focus on Education and Primary Education in particular. Hence, search for deserving schools began. We were able to identify three Panchayat Union Primary Schools (PUPS) in Thiruvallur district in Tamilnadu, India. We visited all three schools at Budur, Marambedu and Arumandhai and understood needs of the school children. We gauged that basic necessities that would be available in any prominent school in the city were missing and this was affecting the students.
We donated Fans, School Bells, Wall clocks, Stationary, Sports accessories and many books. When the children saw new infrastructure for their school, they were excited and their smiles were infectious.
We also distributed Chairs, Tables, DVD player and various books to Budur School.

We participated in Independence Day celebrations at all 3 schools. We gave computers for all three schools, DVD player for one school and various Independence Day stationary to the kids.
Now, we would like to start a Library for them. Budur school has a room that requires a renovation of Roof Tiles, Flooring, Wall painting. Also, we require book shelf, chairs, tables. Most importantly, we need to buy Books. We are planning to start with 200 books for 150 students who are studying in this Primary school.
Total cost is estimated at Rs. 2,04,000 ( Rupees Two Lakhs Four Thousand only ). ACE1979 Charitable Trust will contribute Rs.29,000. Hence, we are crowr-sourcing for Rs.1,75,000 ( Rupees One Lakh Seventy Five thousands only ).
We all appreciate your support in this noble cause.

Ask for an update
Donated to this campaign via Paytm or bank transfer? Click here if you have not received an email confirmation from Milaap.
Thanks to ACE donors, we have started the library.
Students of 4th and 5th standard visited Birla Planetarium, Egmore Museum, Marina, LIght House and took a ride in Metro also.
Donate

CR
You are sending a message to
Chandrasekaran Ramanathan
Go back