This Mother Is Racing Against Time To Save Her 5-year-old From Cancer | Milaap
This is a supporting campaign. Contributions made to this campaign will go towards the main campaign. 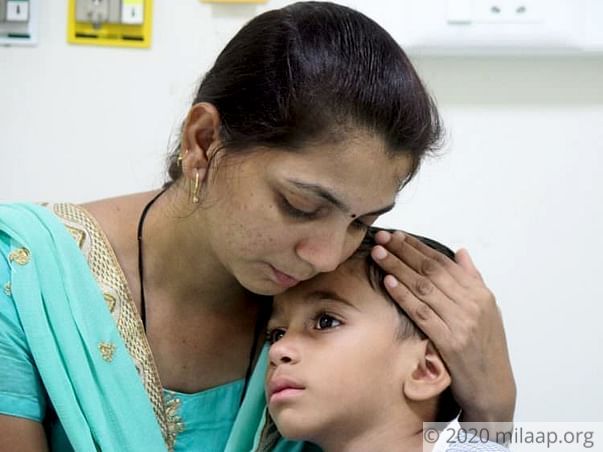 "My son asks, 'Why does Papa beat me? Does he hate me?' Abhay wonders why his father does not answer to him when he cries out in pain asking for help. I cannot tell him that his father is an alcoholic who does not want anything to do with us. My husband does not care about his son who has cancer. He does not want to save our boy but I will.“ - Shobha.

Abhay is diagnosed with a severe form of bone cancer

From being a playful and active child to not even being able to run or walk properly, 5-year-old Abhay’s life has turned upside down in less than a month’s time. He is suffering from a dangerous tumor in his leg and a deadly form of bone cancer that is spreading quickly. His mother, Shobha, who is fighting this battle all by herself with no support from her alcoholic husband, is finding it very hard to save her son.

Shobha and Abhay in the hospital

Abhay has sleepless nights due to excruciating pain

Just over a month ago, Abhay’s constant pain in his right leg forced Shobha to get him checked up. After some tests and scan, it was found that Abhay was suffering from Ewing’s Sarcoma which is a form of bone cancer. Abhay’s is crying in pain because there is a deadly tumor that is growing rapidly in his right leg.

“He was completely normal just about a month ago. He would love to ride his bicycle and run around. Right now, he doesn’t even sleep at night and he just keeps crying out in pain. His right leg is hurting terribly. It’s like he is crippled because he can’t even walk properly, forget riding his bike. This happened so fast, just within a month. He doesn’t even go to school anymore and he seems so frustrated because of the pain. I just want to see him get better but I have no idea how to provide for his treatments.” – Shobha.

In the past 2 weeks, the 5-year-old’s condition has worsened so much that if left untreated, his tumor will just grow and spread to other vital organs. This can prove to be fatal in no time.

Abhay’s only hope of survival is to have chemotherapy, immediately, for the next 3 months. After chemo, he needs to undergo a surgery to remove his tumor. To add to the child’s misery, even after the surgery he needs 4 months of additional treatment. Shobha can’t even afford Abhay’s treatment for a week.

“My husband drinks so much. He doesn’t care about Abhay or me. Not one bit. I’ve come to Bangalore for Abhay’s treatment almost a month ago and he hasn’t even called once, let alone trying to help out with Abhay’s treatment. I have two daughters, Arpita and Ankita, too. When he’s drunk, he hits my children and me. Right now, I left my daughters at my sister’s home, away from our village. He doesn’t care about them too and won’t look after them so I had to do something. “- Shobha.

Fighting alone, Shobha doesn’t want to give up

Shobha is a housewife and throughout the years, her husband has worked as a farmer. She has spent her life in poverty. Now, tormented by Abhay’s pain, this fight is taking a huge toll on her.

“But, even if my husband helped us, how much could he help? He earns less than Rs. 100/day and he spends it on drinking. Most of the days, my kids and I just eat one meal. Right now, I’m staying with my sister who feeds Abhay and me. I am so depressed. I don’t even work. But, I’ve never thought about any bad things that could happen to Abhay. He means the world to me.” - Shobha.

For Abhay’s treatments until now, Shobha has borrowed around Rs. 65,000 from her relatives who can’t afford to help her anymore. Far from her daughters, beaten multiple times by her drunk husband, Shobha can’t bear seeing Abhay in so much pain every day. Abhay needs to start chemo in the next few days but Shobha, who is devastated, can’t save her son without your help.

UPI: rzpy.givetomlpabhayrul002@hdfcbank (Copy to clipboard)
Or
Click here to read the instructions before you make a bank transfer. 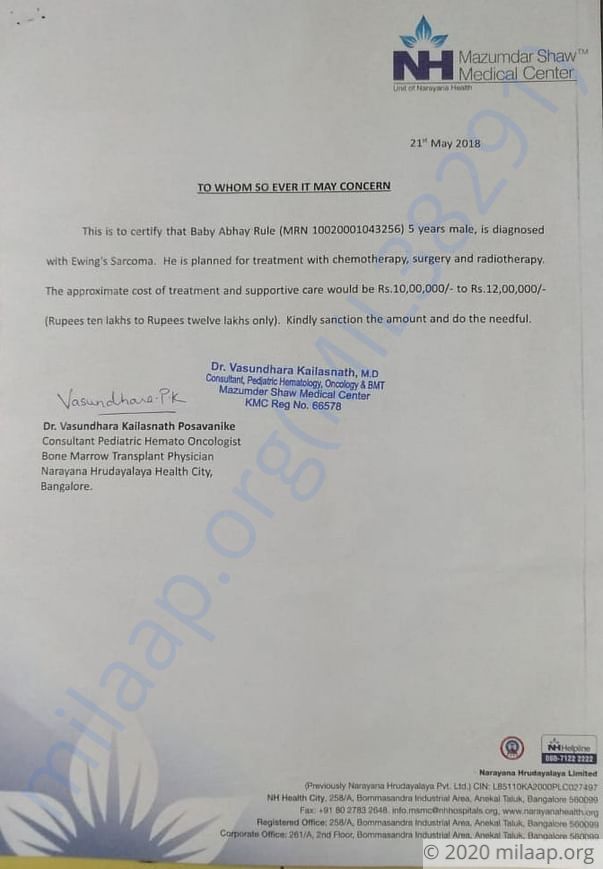 UPI: rzpy.givetomlpabhayrul002@hdfcbank (Copy to clipboard)
Or
Click here to read the instructions before you make a bank transfer.

Abhay came to the hospital for OPD consultation with echo and CBC. Please keep him in your prayers!

Abhay has completed his chemotherapy. Now one scanning is remaining and we are hoping that will give a positive result. Here is a recent picture of his:

Abhay has completed his chemotherapy. Now one scanning is remaining and we are hoping that will give a positive result. 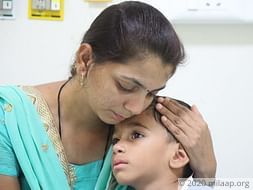