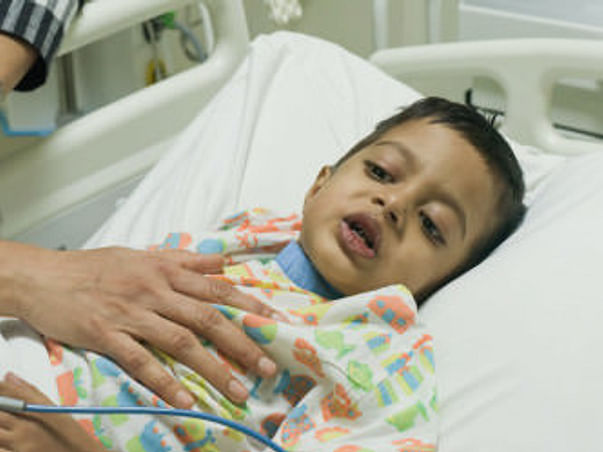 “Every night when I carry him to bed, I notice that he’s gotten weaker. He’s now 12 kgs, and his weight is only reducing. Every day seems like his last. One moment, he’s vomiting blood, and the next, he’s lying unconscious. He’s become so fragile. His body is now giving up on him, and there’s only one thing that can save him now, but it’s beyond our reach.” - Mala, Aadhish's mother

Little Aadhish’s childhood has been spent either in the hospital or being sick at home. He hasn’t seen a world beyond the pain of the severe liver disease he’s been living with ever since he was a 6-month-old baby. Unlike other children, Aadhish can neither play, nor go to school. Even the little treats that children enjoy, like eating chocolates, are alien to him. Aadhish’s liver is a 100% damaged and without an urgent liver transplant, he has little time left. After spending lakhs on his treatment already, Vishal and Mala are now helpless.

Each day that he goes without a transplant, he's pushed closer to death

Aadhish has a condition in which the veins in his liver are blocked, causing extremely poor liver function. It’s been 5 long years of struggle for little Aadhish. In the past few years, he has been admitted in the ICU innumerable times. Hospital beds replaced the comfort of his mother’s lap, and regular tests and scans made his life miserable. His parents have done everything they can to get him the best possible treatment. Unfortunately, his liver disease proved to be stronger than any medication. Only a new liver can save his life now.


“He’s not scared of injections or hospitals because he thinks this is all there is to life. But sometimes he sees children playing and asks me ‘Mumma, when can I play on the cycle like that?’ and I have no answer. We have tried every treatment and procedure possible, and now we’re at a dead end. He's not just throwing up blood, but he has severe internal bleeding. My baby will bleed out without treatment.”

Every morning, Mala and Vishal reluctantly leave for work in the morning, leaving Aadhish with his grandmother. As much as they want to stay with their sick child, they know that without money, they will never be able to save him. However, despite their best efforts, Mala and Vishal are falling short on funds and time. Aadhish needs the surgery by July 22 or he will not survive.


“Every time I get a call from home, I wonder what bad news it’ll bring us this time. I wish I could stay with Aadhish all day, but his medical expenses are more than what we can afford now and we have to pay off our loans as well. Every other week he’s in the hospital, and every month he’s admitted to the ICU. That costs us 1 lakh every time. We’re trying very hard, but there’s nothing more we can do.”

Vishal and Mala have already spent nearly 13 lakhs on Aadhish’s treatment so far by taking loans and borrowing money. Years of medical expenses have left them exhausted – mentally and financially. Aadish needs 16 lakhs to get a liver transplant, but they have nothing left to save him. The little one has two weeks to get the liver transplant. Aadish can only have a life free of pain with surgery, and only you can help save him.