It Took A Year To Find What Was Killing Yaswanth - Save Him | Milaap
This is a supporting campaign. Contributions made to this campaign will go towards the main campaign.
This campaign has stopped and can no longer accept donations. 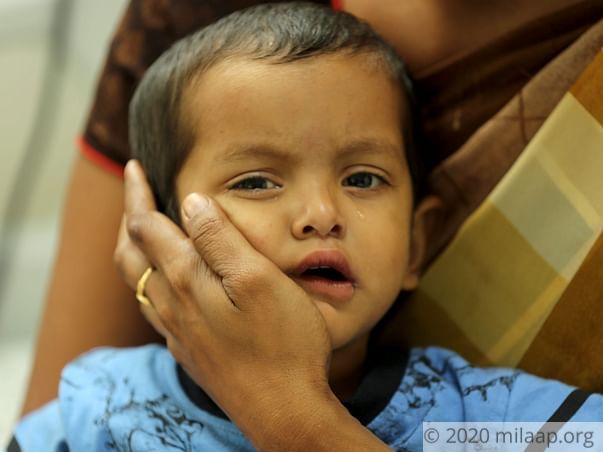 Prasad and Laxmi lost a year trying to find the reason behind their son’s chronic stomach ache. The lost time may cost Yaswanth his life. The family finally has a diagnosis – decompensated liver disease. Unfortunately, the solution is far from their reach – a liver transplant.

In the time that took to diagnose him, Yaswanth's liver was damaged beyond repair

When Yaswanth was 6 months old, he began having recurring diarrhea. His diaper was filled with mucus. His tummy was tender and bloated, often making him cry when anyone touched him. Prasad and Laxmi began their hunt for medicine or an answer. No doctor could shed light on the situation.

“In Guntur, we got to know his liver is damaged. He was born with some deficiency. If we had gotten help sooner, maybe we could have saved him from all this pain. We had to watch, as he slowly lost his strength, stopped eating, and began crying all day in pain.” – Laxmi

He could go into multi-organ failure and die

The family landed at a hospital in Chennai for a liver transplant. There, they were told that the surgery can be delayed. Yaswanth was discharged and sent home. His pain only got worse as every follow-up and test at various hospitals wiped out his father’s savings.

“One day, it looked like he would not survive the pain. So, we took him to a hospital in Hyderabad known for liver transplants. Our doctor said any more delay in the transplant could put him in multi-organ failure. Saving him at that time would be difficult.” - Prasad

First, they lost time trying to find the disease, now they are losing time to find money

Prasad did not know how much the transplant would cost until then. When he realized he would have to arrange for Rs. 18 lakhs, he understood why they were turned away everywhere else. As a farmer, making around Rs. 50,000 in a year, Prasad had Rs. 2 lakhs savings that went towards medical expenses so far. In fact, he even borrowed more money from his friends to pay bills.


“I could never afford 18 lakhs. Maybe that is why Yaswanth did not get help anywhere else. My financial condition should not kill my son. It should not keep him in pain.” - Prasad

Yaswanth has probably not known even one healthy day in his life. The disease is taking every bit of him. He needs a liver transplant immediately.

How you can help save Yaswanth

Yaswanth is not even able to poop now. He has a severe stomach ache, that keeps him from falling asleep. He has stopped eating, and must be force-fed. His condition is clearly getting worse, and this worries his parents.

“For nearly 2 years, my son has been dying. I want to save him, and give him the life we promised when he was first born. We did not promise him luxury or anything materialistic. We promised him happiness. He needs to be alive to experience it. Please, help me.”

Your contribution can save his life. 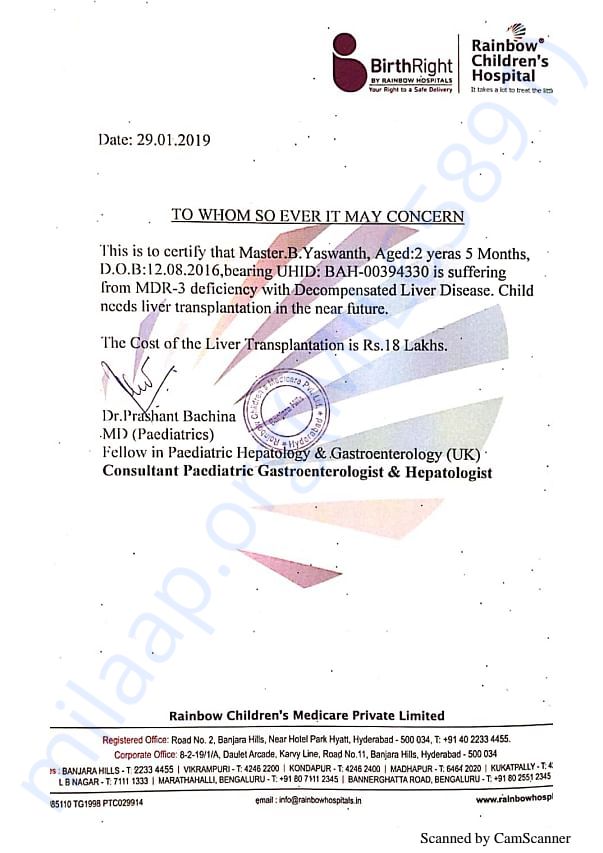 Yashwanth is no more with us. He was undergoing his treatment but his health deteriorated and he couldn't make it.

Funds raised has been utilized for his treatment

Yashwanth is doing well. The kid is at home now and is on medications as suggested by the doctor. The doctor's advised them to go ahead with the transplant as early as possible as the recovery chances for the kid is very high. They are facing shortage of funds, due to which the transplant cannot be done. 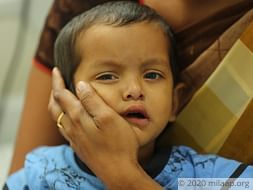