7-Year-Old Koushik Needs Urgent Liver Transplant | Milaap
This is a supporting campaign. Contributions made to this campaign will go towards the main campaign.
Milaap will not charge any fee on your donation to this campaign. 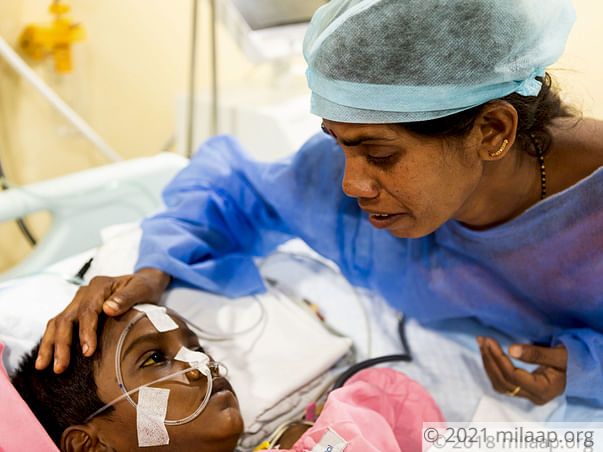 A happy and active child, Koushik enjoyed going to school, neatly dressed up and with his favourite rotis packed for lunch.  A friendly little boy, he enjoyed playing with the neighbourhood children. Koushik loved trains and his favourite game was making a human train with his little friends. But in two week’s time, Koushik’s life changed drastically and for the worse. Now his liver is damaged and he is lying down in an ICU bed in Hyderabad, far away from his village home in Karimnagar, Andhra Pradesh. He needs an urgent transplant in a matter of few days. As the 7-year-old waits for the life-saving procedure, his mother, Lakshmi is petrified. She spends sleepless nights thinking that if they can’t arrange the money for the transplant, they will lose their son forever.

Koushik’s jaundice started getting worse - an indication of something dangerous

Fifteen days ago, Koushik fell sick. He had severe jaundice and medicines couldn’t cure it. The local doctors advised Lakshmi to take his son to Hyderabad for better treatment. A tiresome ambulance journey brought Lakshmi and Koushik to the big city. Several tests were conducted and finally, Kaushik was diagnosed with a damaged liver. Lakshmi is now pinning all her hope on the liver transplant for her son to get better.

“Within matter of days, my world turned upside down. We have always lived with financial problems but my husband (Mallesham) has been very supportive. But now with Koushik’s severe illness, I don’t know how we will manage.”

Kaushik is running high fever and is suffering from extreme pain due to a swollen stomach. His eyes are yellow and he can’t eat anything. Whatever he eats, he vomits it out.

“It is such a painful sight to see him going through so much pain. He was always a fussy eater and would never finish his meals on his own. But only if I fed him, he would eat it. Now as I see him not being able to eat anything, I can’t stop myself from crying.”

Lakshmi can't hold back her tears on seeing her son suffering

A cleaning staff by profession, Koushik’s father is struggling to afford the transplant

Lakshmi’s husband, Mallesham works a cleaning staff in a private company in Dubai. He earns around Rs 9000 per month and is the only earning member of the family. He is anxious on hearing the news of his son’s condition - he is coming down to India. Mallesham is willing to be the donor but the cost is a major roadblock.

7-year-old Koushik is suffering from acute liver disease. He needs a transplant at the earliest but his poor parents are unable to afford the transplant. They have already spent Rs 2 lakhs after borrowing from friends and near relatives and are in no condition to afford the transplant costing Rs 25 lakhs. Your generous contribution can give a second chance to Koushik. 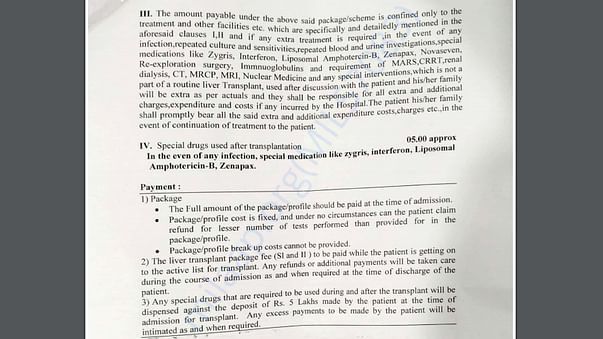 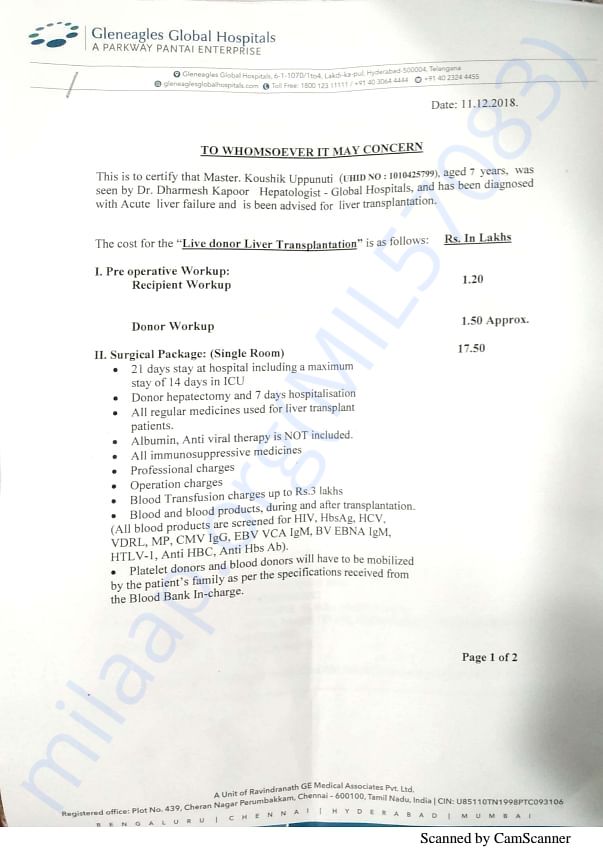 Koushik is still in the hospital and is doing well. He is currently on medications and is under observation. He will be discharged in a couple of weeks and we will have weekly check-ups.

Thank you for the love and support shown towards Koushik.

He has been moved to the ward now and is showing good signs of improvement. He has started to eat soft food and is able to talk little. He will be discharged in a couple of weeks and we will have weekly check-ups. His father (donor) has been discharged and is recovering well.

Please continue to share this campaign with your friends and family!

I am rejoiced with the love and support given to Koushik.

He has undergone is liver transplant successfully. His father was the donor. Presently he is in the hospital and unable to talk.

Please share the campaign and pray for his health. Will keep you posted. 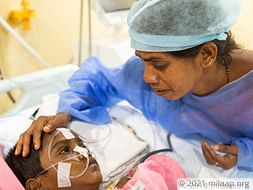