Dipesh Cannot Be Home For Diwali Because Of Cancer, He Needs Your Help | Milaap
This is a supporting campaign. Contributions made to this campaign will go towards the main campaign.

Dipesh Cannot Be Home For Diwali Because Of Cancer, He Needs Your Help 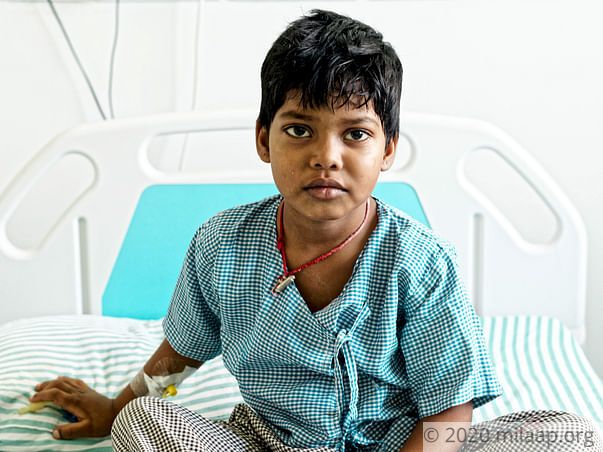 When Dipesh heard the nurses wish each other Diwali, he wondered why he has to be in the hospital. He asked his mother why he can't have namkeens and sweets. His mother told him that there's a 'bad thing' in his body and he can only go home after doctors remove all of it. Little Dipesh doesn't know that the 'bad thing' is blood cancer and it is killing him. The innocent kid prays that the 'bad thing' in his body should be gone soon while his poor parents struggle to save him.

Kalavati can’t believe that her happy family isn’t the way it was a month ago. She lived with her husband, Banshi and 2 kids- Dipesh and 12-year-old Seema. Her entire day would get lost in taking care of them, but now one of them is away in the hospital. It breaks her heart to see Dipesh fighting cancer at such a young age.

“2 months ago, when Dipesh was brushing his teeth, he started screaming. Terrified, I ran to him to find his mouth full of blood. He was sweating badly. We immediately rushed him to the doctor."- Kalavati

After Dipesh was diagnosed with blood cancer, the doctors told them that he needs to be treated in a hospital with better facilities. So, they borrowed whatever they could from their relatives, left their daughter Seema back at home in the care of their relatives and took Dipesh to Kolkata. The doctors in the new hospital put him on chemotherapy to stop his aggressive cancer.

" My son's blood cancer has left him so weak.His body burns with fever constantly and he often becomes pale. My little boy has to undergo treatment for months till his cancer is gone, otherwise, doctors said we will lose him."- Kalavati

After spending more than a lakh on his son's treatment, Banshi has no money left

Banshi works as a caretaker in agricultural farms. With his modest income, he managed to take care of the family. But now to get his son treated, he has already borrowed more than Rs 1.5 lakhs. Dipesh has to undergo chemotherapy for another 6 months. The funds required for this is Rs 8 lakhs. In Banshi’s words, ‘even if I work all my life, I will never be able to arrange such a huge amount.'

5-year-old Dipesh is suffering from acute blood cancer. He needs chemotherapy for 6 months to stay alive. His poor father is in no position to arrange the money required to save him. Without any support, the parents will lose their son.

UPI: givetobanshidharmahato2@yesbankltd (Copy to clipboard)
Or
Click here to read the instructions before you make a bank transfer. 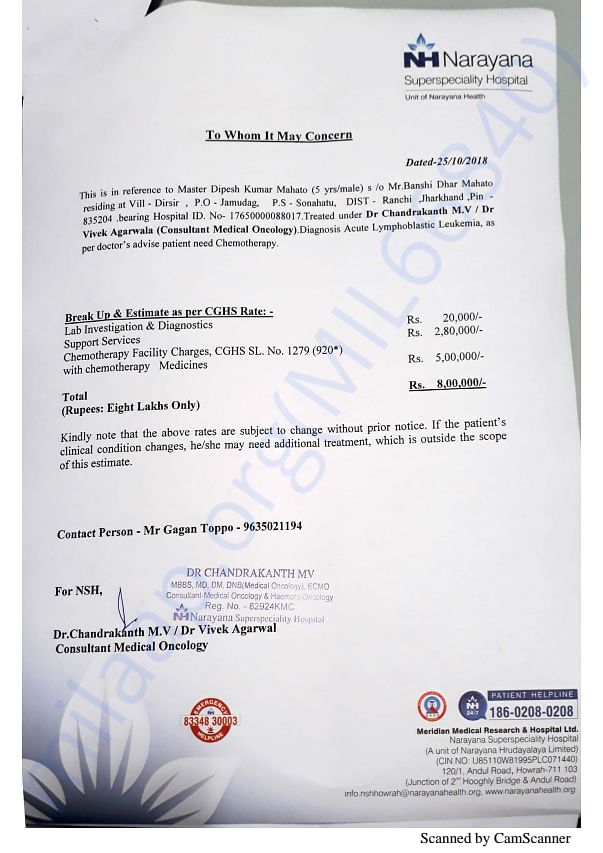 UPI: givetobanshidharmahato2@yesbankltd (Copy to clipboard)
Or
Click here to read the instructions before you make a bank transfer.

Dipesh is doing well. He visits hospital for his regular follow ups. He is undergoing his consultation and investigation and is recovering slowly.

Dipesh is doing well. He is undergoing his consultation and investigation for continuing his chemotherapy now and is recovering slowly.

Regards,
Bhaswati
Hi All,
Dipesh is undergoing weekly chemotherapy currently. This will continue for 4-5 weeks after which a scan is planned. According to the results of the same, the future course of treatment will be determined.

Thank you all for the love and support, please do continue sharing the campaign as the family is need of funds. We will keep you updated on the progress.

Donated to this campaign via Paytm? Click here if you can’t find your donation listed below.
LR
Lakshmi donated $100

Dipesh, i am looking forward see your happy picture after your bad thing is gone!

Donated to this campaign via Paytm? Click here if you can’t find your donation listed below.
LR
Lakshmi donated $100

Dipesh, i am looking forward see your happy picture after your bad thing is gone!

SP
You are sending a message to
Shailendra Parashar
Go back 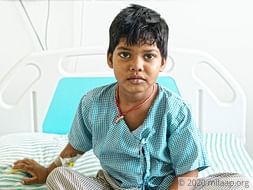 Dipesh Cannot Be Home For Diwali Because Of Cancer, He Needs Your Help