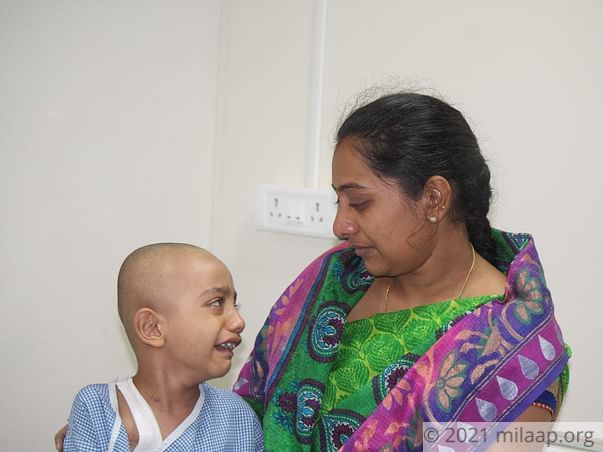 “He keeps asking me ‘when will this bad thing go away from my body, appa?’  and every time, I tell him it’s just a matter of months before he becomes strong again. He has so many questions about when he can go to school and why he can't play like other children. When he’s not asking questions, he’s only crying. Even the mere sight of a hospital gown scares him. My son is fighting a rare form of cancer, but we’re running out of time to save him.” - Raghavendra, Sai Narayan's father.

Little Sai Narayan’s many questions about his recovery are mostly met with positive answers from his parents, Raghavendra and Prajna. But as the days are going by, their hope is dwindling. Sai has a rare form of cancer that started in his left kidney. It will now spread quickly to the rest of his body without a bone marrow transplant. After spending lakhs on his treatment over the years, his parents are now struggling to give their son his only chance at life.

A few days after his first birthday, Prajna felt a lump on the left side of Sai’s stomach. She and Raghavendra immediately took him to a doctor only to find out the most devastating news – he had a growing cancerous tumour in his left kidney.

“The tumour had grown so much that he had to get surgery immediately to remove his left kidney. It was the only thing that could save him. He had chemotherapy after that, and we thought the worst was behind us. For three years, our son played and went to school like other children. We took him for regular checkups every other month and returned home happy. But on May 10 this year, we found out his cancer was back.”

Sai Narayan’s cancer relapsed and a tumor was found on the right side of his chest. Even after surgery, cancer threatens his life. Sai needs chemotherapy and a bone marrow transplant at the earliest to finally beat cancer. This is his only chance.

After spending lakhs on his treatment already, Sai’s parents are now at a dead end


“We thought he would never have to live through the horrors of this disease again. He had no memory of the surgery or the pain that he went through when he was 1. But now he’s older and understands pain and fear. My wife can't help but break down whenever he cries. I desperately hope that this is not the only memory he has of his childhood, I hope he has a chance of a future. But so many years of expenses has left me with no savings. I have no way to arrange such a large amount in such a short time.”

Sai Narayan needs a bone marrow transplant at the earliest to survive cancer. The rare, malignant cancer that he suffers from will spread rapidly to other parts of his body without treatment. His parents have already spent everything they had on his treatment for the first time. 14 lakhs is beyond what they can afford now. Little Sai needs your help to finally beat cancer.

Donate
0%
Be the first one to donate
Need Rs.14,00,000
Card, Netbanking, Cheque pickups
Or Donate using